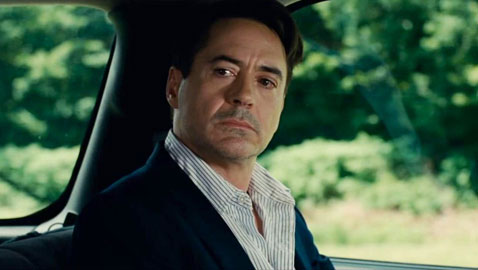 Star power and cliché abound in this uneven courtroom drama that’s really more about the interactions of the players outside the crucible of justice and how those relations season the “unbiased” proceedings. John Grisham lite or Nick Sparks with some gravity might be the best way to describe “The Judge” directed by David Dobkin. The film’s a bit of a genre switch for Dobkin, too, as he cut his directorial teeth with screwball comedic fare such as “Wedding Crashers” and “The Change-Up.” 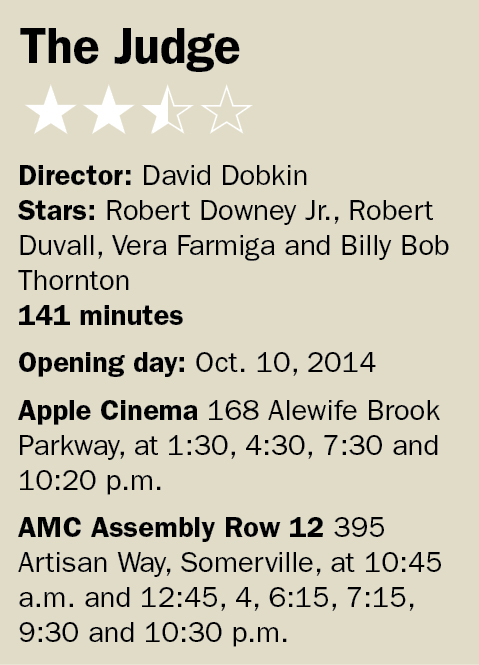 By construct, “The Judge” is rife with conflict and paradox coming in the form of well-worn archetypes such as past versus present, country versus city and the father railing against the son who just won’t see things his way. The film’s most beatific blessing, however, beyond the gorgeous, bucolic setting (our Shelburne Falls, subbing for small-town Indiana), is the casting of Robert Downey Jr. as Hank Palmer, a slick Chicago attorney who does nothing but win and has a wife with abs and a derrière you could bounce quarters off of. But, as we find out shortly, Mrs. Palmer (Sarah Lancaster) has been bored and wandered with one of her fellow gym rats, something Hank is unceremoniously informed of as he waters his prized hydrangeas. All this good news comes as Hank learns his mother has died after a long bout with cancer. Clearly Hank is detached from the family out in the heartland, and for us, the viewer, he gets a few automatic demerits for not being there with mom at the end. His quick reprieve lies in his compassion toward his 7-year-old daughter, Lauren (Emma Tremblay).

Hank’s mother’s funeral finally beckons him back home to Carlinville, Ind., where not much in the town of cascading waterfalls and embittered farm boys welcomes Hank, not even his own pa, Joseph Palmer (Robert Duvall), the town’s sitting judge for 40 years. About the best Hank gets is a slice of pie from an old ex (Vera Farmiga) whom he unintentionally slights when he comments that she’s still doing the same thing (working at a diner) some 20 years later. His most affirmed ally comes in his mentally impaired brother Dale (Jeremy Strong) who talks in “Rain Man” riddles and shoots everything on an old 8MM camera. His older brother, Glen (Vincent D’Onofrio) is sympathetic, but also resentful as he’s been the one who stuck around (after a car accident claimed his big league pitching career) to manage the Palmer family dysfunction.

The Palmers are not a happy lot, and less so when under the same roof (Hank is staying with his dad and Dale), though all the fractious saber-rattling gets put on hold after Pa Palmer drives out to the convenience store in the middle of a road-flooding rainstorm. The next morning he can’t remember anything, his 1971 Cadillac is dinged up and there’s a body lying in a ditch – a body that happens to be that of a man the judge let off two decades earlier, and who subsequently followed through on his lethal threats toward the girl he’d been stalking. Suddenly it’s the Judge on trial (for murder), he’s got an inept attorney (Dax Shepard) and secrets to keep. Ultimately Hanks steps in. More than the case at hand, it’s their stormy relationship that’s on trial.

As pat and predictable as “The Judge” is, it does offer vast thespian space for lion-like Duvall to light into some of his fire-and-brimstone bravado (think “The Apostle” or “Apocalypse Now”), which plays handsomely off of Downey Jr.’s smooth, witty snark – something wonderfully refreshing to witness outside the old “Iron Man” suit. The pair together, even after an all-night bender, could elevate any venture, even a “Sharknado” sequel, and it helps too to have Billy Bob Thornton in the mix as the prosecutor assigned the case and bearing an ax to grind with Hank.

Dobkin and his fellow writers (there are four credits) know they’re twisting old metal here and work hard to find new ways to forge ahead, but in doing so wedge in too many disjointed subplots (be it the import of little Lauren for a cutesy stint in Carlinville, or the saucy young law student who stirs Hank’s primals) that subtract from the Downey and Duvall main attraction. I’m not sure how Dobkin carried this impressive assemblage off in the first place, but the real miscarriage of justice is that by the time the films rests, not more was done with such a dream team.