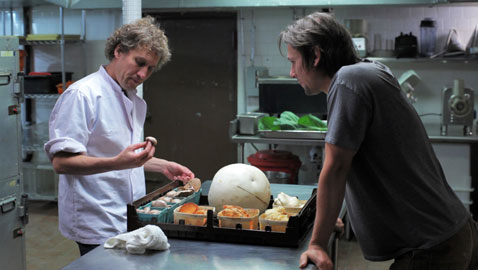 Self-described Arlington girl Julia Halperin brings her movie “Now, Forager” to the Somerville Theater for a one-night event Thursday. The film, about a couple who forage for wild mushrooms that they sell to swank New York eateries while they live simply and idealistically, becomes a portrait of a marriage inside the stressful and mercurial innards of food art culture. Ultimately what pulls at Lucien (co-director and writer Jason Cortlund) and Regina (Tiffany Esteb) are the realities of such unsustainable ideals and the pressures that restaurant “side work” puts on their relationship, with its irregular hours and an olio of over-seasoned personalities interjecting their own recipes.

“Now, Forager” screens at 6:30 p.m., followed by a Q&A with both directors. The culinary treat du jour, however, is a post-film, post-Q&A 9 p.m. dinner option at Cuisine en Locale, 156 Highland Ave., Somerville, featuring locally sourced foods and plenty of fall-foraged ’shrooms, including the rare Hunter’s Heart. How’s that for a taste of life imitating art?

If you’re unfamiliar with Cuisine en Locale, it’s a CSA/personal food service that’s been around since 2005 but recently put down roots and expanded. The movie and five-course/prix fixe dinner package is $45, or $10 for just the movie. Cuisine en Locale locavore-at-large J.J. Gonson tells us the bar will be open and serving local craft beer. While all the ingredients haven’t been gathered quite yet, she promises a “this will be a delicious and unique dinner.” For information and details, see the film’s event site.