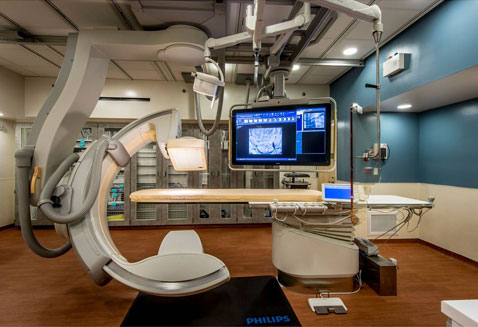 For years, Cambridge Health Alliance doctors who wanted to perform advanced radiologic procedures had to cope with outdated equipment or use an operating room, and some patients were sent elsewhere for treatment. Now, physicians and officials are hoping a newly opened radiology suite with modern equipment will improve patients’ experiences, expand services and bring in sorely needed revenue.

The Alliance held an open house Tuesday to show off the new laboratory and its sophisticated equipment, located in the radiology area on the first floor of Cambridge Hospital. Among the visitors was state Health and Human Services Secretary John Polanowicz, who praised the effort to offer more high-level care.

“This is great,” Polanowicz said. “They have such a great medical staff. It’s really nice to see they were able to purchase equipment to go along with their staff.”

“If we’re going to say that patients don’t always have to go to teaching hospitals, you have to have facilities” to treat patients in their home communities, Polanowicz said.

Alliance trustees approved spending $2.1 million for the project in December; some board members expressed misgivings about exceeding the capital budget that had been set six months before. Proponents said the upgraded and new services would produce $868,000 in additional revenue in the first year and $1.4 million in the fifth year. “Radiology is the most profitable line a hospital has,” one staff member said.

The new service is called interventional radiology, and the equipment essentially allows specialists to see inside blood vessels and organs as they direct tiny instruments that clear blockages and perform other minimally invasive procedures. Among the treatments the new center will offer are treating uterine fibroids by inserting tiny beads to block arteries feeding the fibroids; destroying small tumors via a probe inserted through the skin; and minimally invasive spine surgery.

Without appropriate equipment, vascular surgeon Dr. Moon O. Kwoun has needed to treat some patients in the operating room where they needed general anesthesia; now they can be treated in the interventional radiology lab under moderate sedation, said Doris Gentley, senior director of radiology. 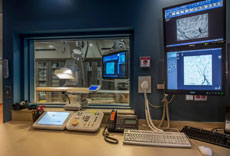 The radiology lab cost about $2.1 million, but is estimated to make $868,000 in additional revenue in its first year.(Photo: Cambridge Health Alliance)

Kwoun estimates he will be able to treat about 20 patients a year at Cambridge Hospital instead of sending them to other hospitals, in addition to patients who will get care in the interventional radiology center instead of the operating room, Gentley said.

The service opened Sept. 17 and has treated an estimated 30 patients since, she said. Many of the procedures take several hours.

To increase volume, staff members are advertising the service to primary care physicians, oncologists, surgeons and ob-gyn specialists in the Alliance system. At least one primary care doctor, Dr. Brian Herrick, who works part time in the Malden center and heads the Alliance’s clinical information system, came to the open house, looked at the new machinery and said: “This is amazing.”

When doctors have to refer patients outside the system for treatment, “you end up losing follow-up,” Herrick said. With the new service, he said, “all will be visible to us as primary care physicians.”

As he spoke, nurses and technicians milled around the machine with a large C-shaped arm at the end of a long, narrow platform where the patient lies. A screen showed images of tangled red blood vessels – one side of the brain, said chief of radiology Dr. Carol Hulka – and arteries in the pelvis, legs and feet.

“This is already paying off,” Hulka said. “It has brought [Kwoun] out of the operating room with more appropriate equipment. That opens up space in the OR.”

Gentley said managers had set a goal of using the new laboratory at least 40 hours a week after 18 months of operation. “At this point we think we may achieve that in 12 months,” she said.

The positive outlook joins other welcome news at the health care system, the state’s second-largest provider of care to poor and uninsured patients. This month it reported ending the financial quarter with a loss of a little over $2 million, well under the $10.1 million for the period it was expected to lose.

Previous story: Seeing profits in imaging, Health Alliance will add $2.1M in upgrades to its budget