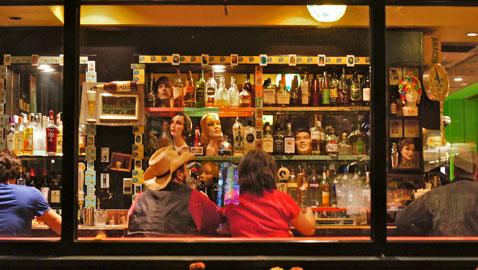 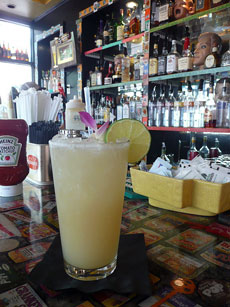 A cocktail served at the Friendly Toast in Kendall Square. A cocktail called the Strange Fruit caused controversy before it was cut from the restaurant’s menu last month. (Photo: Lorianne DiSabato)

The Strange Fruit saga is not quite done.

The Friendly Toast restaurant in Kendall Square took a cocktail named the Strange Fruit off its menu last month after outrage grew at a drink with a name redolent of the lynching of Southern blacks.

A post Saturday by the drink’s creator brings an apology, explanation – and a demand for the restaurant he moved on from in February 2014.

Blogger and medical student Mita Shah Hoppenfeld identified the drink’s name as coming from a poem by Abel Meerpol in 1937 and sung by Billie Holiday in 1939, calling it and a 1965 version by Nina Simone “a song of protest and grief so deep and palpable that I can’t quite wrap my mind around it.” She wrote Feb. 8 about bringing it to the attention of a Friendly Toast employee and the restaurant’s tone-deaf immediate response, and the story went viral.

In dropping the drink, restaurant owners Eric Goodwin and Scott Pulver said Feb. 10 that they had come to understand it as “a holdover from when many of our drinks were named after banned books” – in this case a 1944 novel of interracial romance by Lillian Smith that Holiday said was named after her song. “We kept the recipe and the name only because the recipe seemed to work. At the time we were not aware of the Billie Holiday song or the banned book ‘Strange Fruit’ after which the drink was named. We should have been, but we weren’t, and we’re sorry,” they wrote.

“The drink is no longer on the menu, and the person who originally devised the name has been gone for a long time now. We can’t speak for their intentions when naming the drink. We don’t know if they were trying to be edgy or in-your-face or flat-out racist,” they said. “We think they were just going off of a list of banned books, but we don’t know.”

On Saturday – more than a month after the furor – the former bar manager of The Friendly Toast, William Yerxa, wrote to give his side of the story on Google+, confirming origins of the drink that were unknown to the employees who talked with Hoppenfeld.

“I am embarrassed that I did not know the reference to the Billie Holiday song, as I had named the cocktail after the novel. If I had, I certainly would not have named a cocktail after it. I sincerely apologize for that,” Yerxa wrote. “However, I would like to make it known as public record that I am not trying to be ‘edgy or in-your-face or flat-out racist’ … Call me ignorant, call me flaky, but please, don’t call me racist.”

He did not mention Goodwin and Pulver’s third possibility, which was also the reason he cited for naming the drink as he did.

In a letter he said was sent in mid-February to Goodwin and Pulver, he described reading Smith’s novel as a high school sophomore and what he knew of her motivations: “She was a liberal white southerner with a bone to pick. Smith went on to be an activist for the Civil Rights movement until her death in 1966.”

“You see, though, you didn’t know that. Neither did the blogger that created all of this incredibly factually incorrect recourse. She published an article that – in turn – resulted in me (indirectly) being called racist, ignorant and even stupid. And worst of all, you fed into that,” Yerxa wrote.

Yerxa said he asked to speak with the owners by phone soon after Hoppenfeld’s writing went public, but got no response. He wanted the owners to know he was “truly hurt” by their failing to reach out to him for an explanation, and he ended his open letter with a request:

That you relinquish my cocktail list in its entirety. I know that this might seem over-dramatic, but I would like to really cut ties with The Friendly Toast, and – clearly – you wish to cut ties with me.

In an email late Monday, Goodwin said he wasn’t familiar with Yerxa’s letter.

“We have said all we have to say on the subject, and are moving forward, and have made the changes we need to,” Goodwin said.