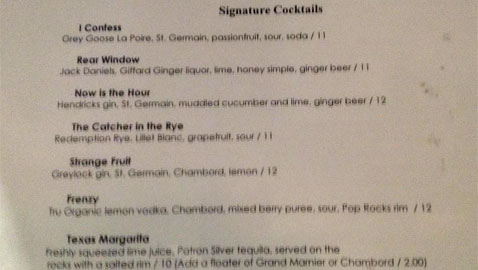 The Friendly Toast has removed a controversially named drink from its menu after a social media firestorm launched by Mita Shah Hoppenfeld, a Cambridge resident, medical student at the Boston University School of Medicine and blogger.

“We take the ‘Friendly’ part of our name seriously. It makes us sad to know that, perhaps for years, patrons have been made to feel an entire spectrum of negative feelings about race that we did not intend because we named a drink insensitively. We wish we had figured it out sooner,” said co-owners Eric Goodwin and Scott Pulver in a blog post on the restaurant’s website.

Hoppenfeld’s post, which was republished on Cambridge Day, criticized Kendall Square restaurant The Friendly Toast for having a cocktail called the Strange Fruit on the menu, as it refers to “a song of protest and grief” about blacks being lynched and hanged from trees.

A repost on Eater, a Facebook status update by Pulitzer Prize-winning author and MIT professor Junot Díaz and a flood of upset tweets showed the depth of feeling on the issue, and the restaurant changed course. Before the restaurant’s blog post, Hoppenfeld cited a mention on its Facebook page in say she was confident “they will be removing the drink from their menu.”

“I’m not sure when, or to what, but thank you to everyone who tweeted and retweeted and shared this blog post, and who joined in on the desire for change – we may have made a small but real difference,” she wrote, also thanking the Friendly Toast. “Issuing a formal recognition and apology would be better, as in a separate post on your facebook page rather than a response to a comment, but I’ll take changing the name.”

A call to the restaurant Tuesday brought confirmation from a server that the drink was gone, but that an official announcement on Facebook or Twitter was delayed because the manager who handled those accounts wasn’t working at the time.

“I assume that’s something the would do. They’re pretty apologetic,” the server said.

Cambridge Community Television blogger Beverly Mire, noting that it is Black History Month, looked for the drink’s origins, and largely echoed what would be said later by Goodwin and Pulver:

The larger question remained: how did the cocktail, that name, land on the menu in the first place? NeighborMedia.org contacted Friendly Toast owner Eric Goodwin, who immediately returned our email inquiry. “We just heard about this earlier today,” Mr. Goodwin said. “We bought the restaurant in October 2013 and inherited this drink without any knowledge of this historical connotation or negative context to it. It has never been brought to our attention in any way. At the Toast, if anyone is familiar with it, we celebrate diversity on every level. If there is anything offensive about this in any way, then of course we will change the name and remove that title. We are in process of doing that now. We are respectful of those who brought it our intention and intend to promptly honor their request to remove it.

Some tweets about the drink and restaurant response: