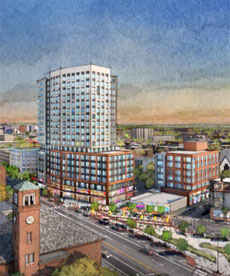 The principals behind the proposed Mass+Main building are offering 20 percent of the 230 units in their residential tower as affordable and middle-income housing.

Builders hoping to put up a residential tower at the edge of Central Square have raised their promised commitment of affordable units and middle-income housing to 20 percent of the total 230 units.

Many developers of bigger projects using incentive zoning, which lets them add units when they commit some as affordable, wind up with 11.5 percent, leading to complaints from those who believe the zoning actually calls for a final 15 percent – and is even low at that.

The principals behind the Mass+Main building want their own special zoning, though, to build taller than current zoning allows – up to 195 feet on Massachusetts Avenue, replacing lab and parking space for Quest Diagnostics next to Jill Brown-Rhone Park – and have found over the course of 15-plus public meetings “that affordable housing was critical,” according to a letter sent Friday.

“Although our original petition called for 17 percent affordable and middle-income units, we are increasing the percentage,” said the letter from Mark Roopenian, a principal at Normandy Real Estate Partners, and Alex Twining, of Twining Properties.

Middle-income units will reflect 3 percent of the building, but “we are doubling the percentage of affordable units from 8.5 percent in the original petition to 17 percent,” Roopenian and Twining wrote. “Overall, we are increasing our required percentage of permanently and privately subsidized units to 20 percent.”

“We know of no other private developer-owner that has offered such a permanent contribution with this type of income mix without taxpayer subsidies,” they wrote.

“An addition of more affordable housing is a very good thing,” said East Cambridge resident Mark Jaquith, who had proposed 25 percent being the right place to start the zoning conversation but has lately been more focused on the tower casting a shadow in his own neighborhood – to which he compared the proposed Mass+Main. “It will still be like putting the Sullivan Courthouse on the little park there.”

Farris said in November that the original 17 percent of affordable housing wasn’t “a good tradeoff” for the increased density the companies’ special zoning would bring to the area, and wasn’t swayed by the increase to 20 percent.

While arguing that planning Central Square by voting the so-called C2 process as a whole would be better than “zoning a whole block to benefit one developer,” and unhappy that the requested zoning carved out parking on Bishop Allen Drive where there could be housing, her main worry was the size of the Mass+Main residential tower.

“While I am glad the developer has offered to build more affordable housing, this would be within a massive building that will wall off part of my neighborhood, Area IV,” Farris said. “The 195-foot height of the proposed building is still 40 percent more than the C2 draft zoning called for, and it’s a whopping two-and-a half-times taller than the current zoning allows.”

She hoped for “a less massive building” with 20 percent affordable housing and 5 percent middle-income housing.

The developers, though, have argued that the size of Mass+Main makes sense as a kind of definition for the border of Central Square from the east and as a kind of bulwark against the encroachment of industry. As they put it in their Friday letter:

Our properties sit on the edge of a neighborhood which faces significant workforce pressures from Kendall Square. We believe this is a special opportunity to transform a series of nearly vacant older lab buildings that are now dead space and create a housing and retail community with an active streetscape and add connectivity from Central Square to the community.

The Normandy/Twining Zoning petition will be discussed at 4 p.m. Wednesday at City Hall, 795 Massachusetts Ave., Central Square, by the Ordinance Committee of the City Council.

This post was updated March 31, 2015, to add Farris’ understanding of how the developers revised their commitment to non-market units.