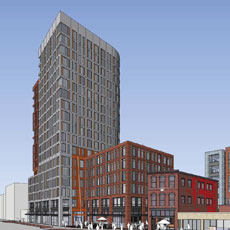 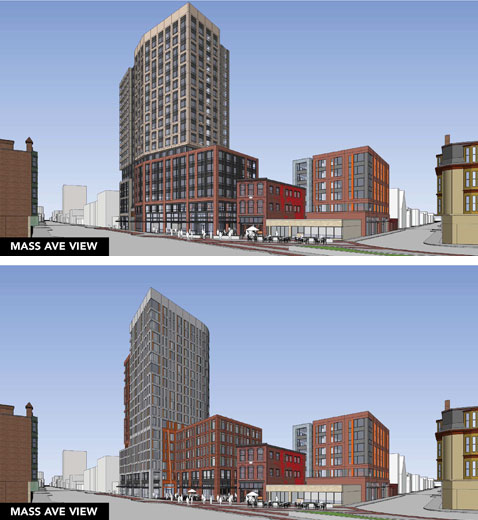 Renderings show the before and after of the Mass+Main building proposed for the east edge of Central Square. Click for larger and expanded views. (Images: CBT Architects)

The Normandy/Twining zoning petition is going to the full City Council with a favorable recommendation for adoption from a council Ordinance Committee meeting Wednesday. An amendment to hold it, and its signature Mass+Main residential tower, in committee for further discussion was defeated.

The council has not yet heard a recommendation from the Planning Board, which is tentatively scheduled to take up the matter again at its April 28 meeting. The board initially heard the proposal Feb. 24 (a transcript is here as a PDF) and had substantial questions about the drafting of the petition, the affordable housing, the off-site parking lots and a slew of other issues.

The council’s referral vote Wednesday came at the end of a 4.5-hour meeting in which design revisions for the 195-foot project, right on Central Square’s Jill Brown Rhone-Park at Lafayette Square, were presented for the first time. The changes could result in new zoning language for the petition, but no such changes were presented.

The developers promised to double the number of affordable housing units from 20 units to 40 units (8.5 percent to 17 percent); middle-income units would reduce from 21 to seven, but the total number of below-market-rate units would be greater: 47 units out of the project’s 232, instead of 41. They also presented a building design that is “more of a point tower,” said project architect David Nagahiro, of CBT Architects. The new design increases the setback of the shorter portion of the building, and sharpens the corner of the high-rise building while bringing it all the way to the ground level.

City councillor Dennis Carlone, an architect and urban designer, gave a 20-minute slide presentation on his alternate conception for the site. He pushed strongly for underground parking under the city’s existing public parking lots, though he acknowledged its additional expense. Carlone’s presentation included sketches of possible buildings, as well as advocating for 55 affordable housing units on the site – part of a proposal that fully half of any density beyond the current zoning should be devoted to affordable units. 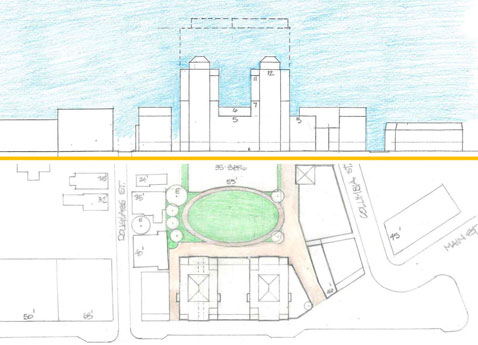 City councillor Dennis Carlone presented an alternative for the site, with a diagram showing mass above the yellow line and a plan view of the site below. (Image: Dennis Carlone)

The meeting also included two hours of public comment before the presentations. A highlight was Harvard professor Lawrence Lessig, speaking on the influence of money in politics, who said campaign contributions from developers can have a significant influence on zoning petitions, especially those that aren’t the result of planning studies. Lessig noted major contributions from real estate interests to councillors, adding: “Humans respond to favors favorably. If you didn’t, you wouldn’t be brave or strong. You’d be a sociopath.”

There were more than 50 speakers during public comment, with about three-fifths speaking in support, some with reservations. For several, the city’s urgent need for affordable housing was the convincing factor.

After some questioning of the developers and city staff, but no substantial discussion of Carlone’s proposals or of changes to the zoning petition text, councillor Tim Toomey moved to refer the petition to the full council with a favorable recommendation. He also moved to cut off debate, which passed without objection. The referral motion passed 6-3, with councillors Craig Kelley, Nadeem Mazen and Carlone voting against.

Kelley had tried to amend the motion to allow the committee to hold additional meetings, but his amendment failed. He was supported by the same two who later joined him in opposing the referral motion: Carlone and Mazen.

Mazen then addressed his colleagues: “Coming to a conclusion on the existing proposal without also exploring the alternative proposal seems to me to be evidently and imminently premature.”

Carlone agreed, saying “we saw a new design tonight – a better design. We don’t know the zoning implications. It’s a point tower, not a slab building. And we’re approving it to go to council. I haven’t even seen a plan.”

Afterward, councillor Marc McGovern said he was unsure if the new changes and Carlone’s counter-proposal merited further discussion before the full council approved the petition: “I’d have to think about it,” he said.

“All we did is move the conversation to the full council,” councillor Denise Simmons said. “We have long conversations at the council all the time,” she said, addressing concerns about the logistics of taking up such an item at a regular council meeting. Simmons also said she would be asking the Community Development Department to analyze Carlone’s proposals.

Carlone, though, was taken aback by his colleagues’ lack of discussion of his proposal. “There was no interest,” he said. “I thought the discussion would continue.”

“We can continue to have discussions about Carlone’s ideas in the full council,” councillor Leland Cheung said. “It happens all the time; I think it’s fairly routine.” 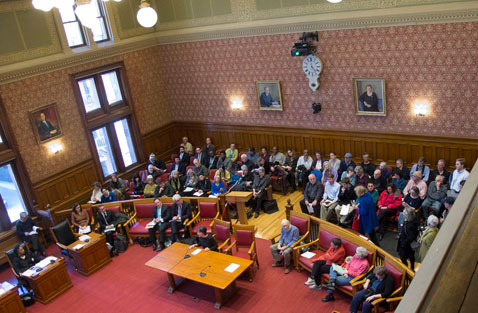 The Wednesday hearing of the City Council’s Ordinance Committee drew many spectators, including around 50 speakers during the public comment period.(Photo: John Hawkinson)

At the close of the meeting, only those who opposed the zoning change remained in the room.

“It sucks. I can’t believe they accepted permanently zoned parking on the residential side of Bishop Allen as part of the package,” said Nancy Ryan, an Area IV resident.

Charlie Teague, a resident of North Cambridge, called it “a moment of truth” when six councillors left 75 potential affordable units “on the table,” a reference to the numerical difference between the Normandy/Twining and Carlone proposals.

The meeting was plagued with audio problems. As has been the case for meetings held in the newly renovated Sullivan Chamber at City Hall this year, audio quality was dramatically worse than before renovations, with repeated complaints that presenters speaking into microphones were inaudible.

“After yesterday’s complaints about the audio we decided to take a step back and rethink our overall approach to completing launch of the new system,” said Rebecca Fuentes, who has managed the renovation project for the Department of Public Works.

Speaking Thursday, Fuentes said two Information Technology department staffers experienced in audio systems would be sitting in on all coming public meetings to make observations and real-time adjustments to the system, and to make technical recommendations to the consultants who designed the room’s audio system. They will be joined by Paul Creedon of the City Clerk’s Office, who has been leading its technological initiatives, and who will be gathering public input on the problems.

Council meetings are scheduled to return to Sullivan Chamber next week, after having been held at the high school since June 2014.

This article was updated April 3, 2015, to change a “Public reaction” heading to say “Reaction after meeting” and clarify that it surveyed only those members of the public who were present at the end of the long meeting.