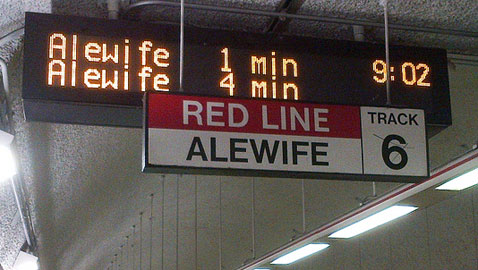 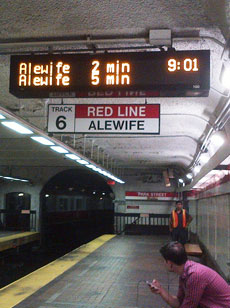 Let’s just say it: The MBTA is committing fraud on what’s probably a daily basis and we should be taking it to court in a class action to make it stop.

The T has been asking customers to rely on its digital countdown clocks since they were installed at 53 red, orange and blue line stations in January 2014. Those countdowns can be wildly wrong, because they all too frequently say how many minutes away a train would be if it were actually running – when it’s not. The clocks don’t say if a train is stopped, which is why you can bolt down the stairs to catch a train that’s reported to be two minutes away and still be waiting on the platform many minutes later, stewing under a countdown clock that’s never stopped saying the train is two minutes away.

Customers pay to enter a T station to take a train based on such estimates. They decide whether to take a taxi, Uber or walk based on them. They tell people crosstown how long to wait based on them. They rely on those estimates to get to job interviews and to the airport. (And unless they have a monthly pass, that’s also $2.10 or $2.65 wasted, potentially multiplied by an entire train platform crowded with people or as many platforms crowded with people are affected by a delay up the line.)

It’s been more than a year since these countdown clocks were installed on T lines, and the commuter rail has had them even longer, so the MBTA and Department of Transportation has had plenty of time to replace the incorrect time estimates with reports that a train is “stopped” or “delayed.” There has been no news it is doing so or explanations such a fix is somehow impossible – including from Rose Yates, the MBTA’s director of marketing communications, who was left a message on this question last week.

Ask for a refund at a T station after discovering an incorrect countdown estimate has screwed you and you’ll get nothing more than an amused look. And of course the state uses our money from the trains we abandon to pay off its massive debt – but should it be doing so based on lies?

Is this fraud? Poke around the Internet and you’ll find definitions of fraud such as this:

We won’t know if there’s a financial remedy until a local attorney steps up to represent T passengers in a class action, but the MBTA could fix its system right now – or explain why it can’t – and stop its willful, daily defrauding of long-suffering customers.