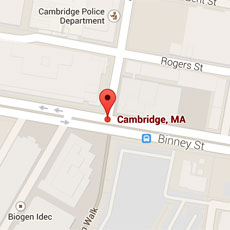 Human remains were found in a duffel bag this morning near Kendall Square, the Middlesex County District Attorney’s Office said.

There is “an active investigation of a homicide” around 225 Binney and Sixth streets, Middlesex District Attorney Marian Ryan and Cambridge Police Commissioner Robert C. Haas said. “Preliminary observations reveal that a duffel bag was found this morning containing human remains.”

At a 6:30 p.m. press conference, Ryan told reporters a suspect was in custody, and that there was a secondary crime scene with other remains in the commons area of a nearby building. There may be more suspects.

The human remains have been identified, officials said late Saturday, but the victim’s name is being withheld pending notification of next of kin.

“This continues to be an active investigation,” Ryan said. “Detectives are continuing to gather evidence in order to determine the circumstances which led to this discovery.”

Authorities say they were called Saturday morning,with he first set of remains reported found on the Officer William Loughrey Walkway, the pedestrian walkway between Binney and Sixth streets and Broadway and between the offices of pharmaceuticals companies and the 14-acre federal John A. Volpe Transportation Center.

A bomb team went to investigate but discovered there were human remains inside, said Jeremy Warnick, director of communications and media relations for Cambridge police.

The site is also near the Robert W. Healy Public Safety Facility, also known as police headquarters for the city.

Officials say a video led police officers to the second set of remains, believed to be from the same body. They were even closer – at an apartment building only a moment’s walk away.

“We’re confident that this was not a random act and there is no threat to the public’s safety, as a suspect has been taken into custody. To provide additional assurance and peace of mind, our officers plan on going door-to-door to speak directly with any neighboring residents to address any questions or concerns they may have,” Haas said.

The suspect is due to be arraigned Monday on charges of being an accessory after the crime of assault and battery and improper disposal of human remains. The name of the suspect will be revealed then, Ryan said.

This post was written from a press release. It was updated July 1, 2015, to add the correct and full identification of the Officer William Loughrey Walkway.