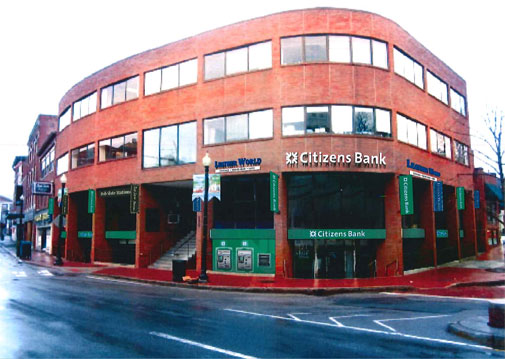 The 10 banners wanted by businesses at 30 Brattle St. in Harvard Square, seen in this rendering, were rejected Monday by the City Council.

Citizens Bank was rejected roundly Monday by the City Council in its bid for more branding at its Harvard Square location.

Moving in with Leather World and Bob Slate Stationer at 30 Brattle St., the bank found the building’s rounded front complicated its ability to advertise itself, and came up with an array of signs, including some that were to light up, complemented by 10 tall banners – all told, nearly quadrupling the amount of branding that would normally be allowed.

That meant getting approval from the Cambridge Historical Commission, Board of Zoning Appeal with Planning Board weigh-in and, because the banners extend over the sidewalk, the council.

“It seems excessive,” councillor Marc McGovern said of the designs. “I want to support businesses, [but] there’s a lot of signage on the building already.”

The council wound up voting 8-0 against the request. Dennis Carlone was not at the meeting.

Four residents who spoke during public comment were also opposed, with Carol O’Hare sharing a statement pointing out that, while the bank may have become less obvious by moving from its one-time location next to the T station, customers’ increasing use of smartphone maps made it about as easy to find.

Councillor Craig Kelley, who bumped the bank’s sign request from last week’s council meeting to this week by use of his “charter right,” had another reason for discomfort: what he saw as a constant stream of requests for variances from city sign limits that had him wondering if the council needed to reconsider its zoning. (A previous attempt in 2010 went poorly.) He vowed to look soon at recently released data on years of variance requests to see if he could spot patterns calling for attention.

In the meantime, he wanted to deny the banners.

Mayor David Maher had yet another reason for saying no to the part of the branding request that the council could control.

Maher noted the difference between Citizens – with more than 1,200 branches and 3,200 automated tellers in 11 states and with $136.5 billion in assets as of March 31 – and the stand-alone local companies Leather World and Bob Slate Stationer even while shutting down a plan that gave local business owners five of the 10 banners.

“Try to reach somebody at Citizens Bank for a donation,” Maher challenged. “So I feel no need to go above and beyond for that reason alone.”

Citizens Bank and its colleagues have long given back to the communities where we live and work. We support organizations that are either based in Cambridge or provide services to those who live in the Cambridge community.

In early May, it was announced that the bank was disbursing more than $1 million in contributions to 72 nonprofit organizations as part of its Citizens Helping Citizens Manage Money financial literacy initiative, including Boston’s Victory Programs, which another bank publicist said serves more than 2,300 people every year in Cambridge, Boston and Topsfield.

But the sign application was not even properly before the council, something councillors did not appear to be aware
of. Despite text that “Approval has been received from Inspectional Services, Department of Public Works, Community
Development, Historical Commission and abutters,” the application had not been approved by Inspectional Services, according to Assistant Commissioner Martha Flynn. Staff members in the department and City Clerk’s Office were unable to explain why the application was on the council agenda.

“I’m really not sure why they were voting on something ISD said was not ready,” said James Wagner, Citizens’ attorney.

Other aspects of the building’s branding are reportedly back before the Board of Zoning Appeal on May 28, and DiGeronimo said the bank was “committed to working with our neighbors and the city to develop a signage plan that helps our customers and the customers of our fellow tenants easily find and access the services our businesses provide.”

This story was updated May 8, 2015, with comments from DiGeronimo and Wagner and with information about whether the issue was properly on the council’s agenda. That information was contributed by John Hawkinson.