Clover’s 24-hour restaurant is happy, safe and a glimpse at future of an all-hours city 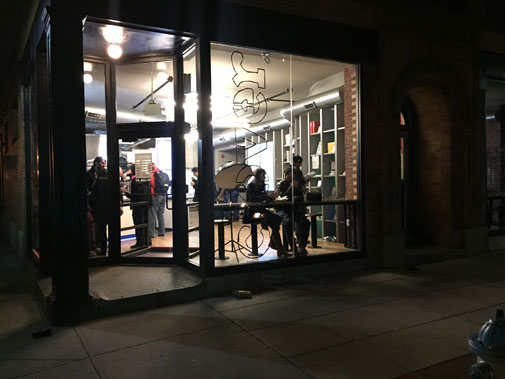 Clover’s 24-hour restaurant is happy, safe and a glimpse at future of an all-hours city

CloverHFI, the city’s only 24-hour restaurant and fourth Cambridge location for the locally born healthy fast-food chain, has been open for a month in Central Square. Since late-night is always controversial in Cambridge – plenty of business owners are skeptics, and residents and police often have fears about safety – it made sense to sit down with Clover CEO Ayr Muir for a peek at what his stake in the ground means for the future of an all-hours city.

Here are five takeaways from Muir about CloverHFI at 496 Massachusetts Ave. and late-night operation, albeit from the perspective of someone whose company was only starting its experiment. (His comments have been compressed and edited for publication in some spots).

The late-night traffic is there. Late-night or all-night operation obviously won’t work for every business throughout the city, but financially it looks like it’s paying off for Clover in Central Square, where it replaces Hi-Fi Pizza after more than 45 years. “Overall we’re thrilled. Our expectations were high, but I think everybody in the company gave my projections a big haircut in the belief we would do well here but not as well as I was thinking – and we’ve surpassed even my expectations financially,” Muir said. “If we do here what we’ve done in the past, we’ll just be at the start of developing relationships that grow and bring more people in.”

It’s worth noting that the city’s previous 24-hour joint, the Tasty Sandwich Shop, lasted in Harvard Square for eight decades. It didn’t shut down; the 300-square-foot greasy spoon was forced out by Cambridge Savings Bank to make way for higher-paying shops – becoming an Abercrombie & Fitch after renovations.

“It’s one to two years before you really get a sense of how things are settling in. But we’re really thrilled to start,” Muir said, marveling at how every day of the week gets busier than the last, reaching a crescendo Saturday and resetting Sunday, and that Central Square nights gets busier hour by hour. “At 11:30 there’s more foot traffic than right now, and then you get to 12:30 and it’s double that. It gets so packed,” he said the day of May 7, noting that a lot of late-night weekday traffic comes from waves of Europeans used to dining at 11 p.m. “Late-night has been great for us from a sales perspective. We’re really happy, though largely it was expected.”

Late-night is safe in Central Square. When Muir came before the License Commission with his plan, he faced resistance from Police Commissioner Robert C. Haas, who warned about crowds getting “out of control” and even violent when let out of clubs after a night of dancing. But Muir knew what he was getting into. “One of our senior leaders came from D.C., and he ran a restaurant down there that was open to 3 a.m. And he was a little concerned, telling us, ‘You don’t know what you have to do, you don’t know how belligerent people become at 2 a.m.,’” Muir said.

But now that CloverHFI has opened its doors to those clubgoers? “He’s shocked at our customers – the people are so sweet,” said Muir, who at that point had stayed until midnight a couple times and worked an overnight once with an eight-person staff.

Neither the senior leader’s nor Haas’ fears have so far been borne out. “Probably the rudest aspect we had to deal with was from people who are not sober coming in, but everyone’s just been really happy and had a really positive attitude. We had one person fall asleep in here we had to roust, but I don’t think we’ve had to call the police yet – and the truth is that many urban restaurants even in daylight hours will have people come in who are not [sober] and you’ll have to take care of it,” he said.

Some credit might go to the food, since he’s sure drunken kids find it refreshingly surreal to stumble in after a night of partying and be handed food made of vegetables and fresh fruit.

Late-night Clover now isn’t how it’ll always be. So far the most common theme in late-night visitors is surprise. But Muir – an alum of the Massachusetts Institute of Technology who knows students and the city’s tech community work late – said “it’s not going to take that long before college kids around the city are going to know we’re open. It’s all going to shift from the sort of stumbling in the door and ‘Oh, what’s this?’ to saying ‘We’re going over to Clover to get something.’”

As the weather gets colder again, he expects CloverHFI to fill with programmers, students and scientists from nearby offices and labs. “It’s probably going to be less people’s image of drunk and disorderly and more like a nerdy coffee shop at night,” Muir predicted.

This isn’t the end of late-night Cambridge, especially if the MBTA helps. As the city and region becomes denser, Muir expects to see more businesses extend hours and possibly go all-night. (Since Cambridge already has a big 24-hour grocery store in Porter Square, he’d like the next 24-hour use to be a coffee shop.) “I expect a long-term shift, but I don’t know how many years,” he said. “There should be multiple use of spaces, more efficient use of space and more overlapping by hours in the day.”

The MBTA could help business owners and their staffs – not just his own, whose hours are largely governed by public transit, but hospital and airport workers, police officers and others – by extending its own hours. “What I’d really like to see is for it to become more like New York,” he said, but even infrequent runs by the T would be helpful “just to have the option, like if it ran regularly but infrequently – one train every half-hour, just so you have some way for people to get around.”

Taking an Uber to get to CloverHFI at 3 a.m. one night a week is one thing, he said, but it’s not a serious commuting option, especially for lower-paid workers. “Right now it’s just really hard for people to get around,” Muir said.

This isn’t the whole of late-night Clover. “I don’t think it’s inconceivable that the Harvard Square or Kendall Clovers could support 24-hour operation,” Muir said, noting that already the Harvard Square location “is only closed and empty for five hours a day.”

First, though, comes Clover shops for Boston – its Newbury Street site has a building permit and a Copley Square location is in the works – and expansion to Washington, D.C. “We’re probably a year away from that,” Muir said.