Colin Stetson and Sarah Neufeld, June 18 at The Center for Arts at the Armory 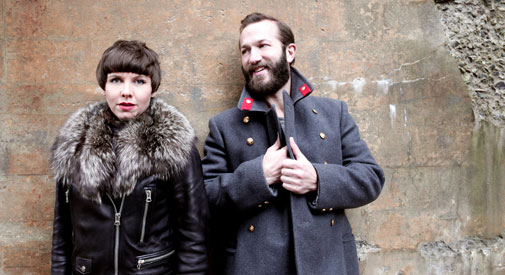 Colin Stetson and Sarah Neufeld, June 18 at The Center for Arts at the Armory

Who’s on? Colin Stetson and Sarah Neufeld with Ryan Sawyer

For who? The intense. People who dig avant garde jazz, minimalist modern classical, electronica and noise, industrial and dark ambient, black metal and indie rock. You know who you are.

Who are they? Acclaimed solo instrumental artists (Stetson is a performer and composer, chiefly on bass and tenor saxophones; Neufeld is a violinist with Arcade Fire and others) who have played together since 2012 and recently release a jagged, richly textured album, “Never Were the Way She Was.” Ryan Sawyer is a drummer who has worked with such names as Rhys Chatham, TV on the Radio, Thurston Moore, Kid Millions, Fiery Furnaces, Gang Gang Dance, The Mekons and Scarlett Johansson.

Are they any good? “‘Never Were The Way She Was’ is stunning, understated and poignant, evoking isolation and yearning for some unnamed thing,” NOW Toronto says. “The eight pieces on the album feel simultaneously contemplative and busy – the sound of active minds idling in a lower gear … ‘Never were the way she was’ has a bracing air, an implicit reminder of the things that can be done with two instruments and two hands,” Pitchfork says.

I want more: Colin Stetson is here and Sarah Neufeld is here.