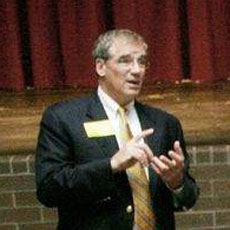 A revised schedule for selecting a new school superintendent was sketched out Wednesday by the School Committee and the firm hired to run the search, with several days identified as key opportunities for community stakeholders to give input and meet with finalists.

In the first meeting with representatives from Hazard, Young, Attea & Associates, the firm selected to manage the superintendent search, committee members were walked through a process that should get to the announcement of a new superintendent by the end of October, if everything goes well.

But in presenting the calendar, HYA president Hank Gmitro also advised the committee that its members should “maintain an openness that if you don’t find the right candidate by November, you shouldn’t settle” – and, in that case, should consider extending the search to find the best candidate. His presentation included cautions that the push to find a final candidate in the fall has several complications.

“Many people who are considering a job change may not be thinking about it at the beginning of the school year,” Gmitro said, and a search early in the school year may yield fewer potential candidates.

HYA, whose Cambridge contract is for $21,500, is one of the largest education executive search firms in the country, and recently ran superintendent searches for Boston, Somerville and Lexington. Its clients are the school boards, not the candidates.

The schedule also is not ideal for community input. “We prefer to [meet people] during school,” Gmitro said. But he nonetheless laid out a plan to engage people, including staff, teachers, parents and other interested parties by visiting the district for two or three days in August. With the committee, they identified Aug. 26 and/or the next day for a first visit, and a follow-up visit Aug. 31.

Being outside the school year, the dates call for flexibility about what happens during those two or three days, he said. While the district might prefer having meetings targeted at different groups – perhaps by elementary, middle and high school communities, as member Fran Cronin contemplated – Gmitro pointed out that “given that we are asking people to come when they are not in school, timing may be the major driver” in figuring out who can come when.

The firm also uses an online platform to solicit comments that will be rolled out this summer.

Staff and community input is critical in identifying and briefing potential candidates, as well as allowing the committee to assess candidates, Gmitro said.

Mayor David Maher said that, after HYA finalizes these dates – expected in a matter of days – his staff will post the timeline.

The other potential issue Gmitro flagged was the aversion many candidates have to their names being made public as semi-finalists. Especially for a sitting superintendent, the risk can be too high for them to pursue a position.

If there are three finalists, he said, there is a two-in-three chance the candidate will not be selected, which may be too high a risk for many candidates to let their community know they looked elsewhere. Many of the firm’s communities, Gmitro said, let only the final “preferred” candidate be announced publicly.

Communities that want to involve more public input in the decision-making, he said, need to be aware of this tradeoff. Gmitro pointed out that in HYA’s recent Boston search for superintendent, which included a public vetting of finalists, the only sitting superintendent finalist dropped out rather than be named publicly without more assurance of a job offer. Cambridge’s early timeframe exacerbates that problem, he suggested, because “it will be difficult for sitting superintendents … to let their community know at the beginning of a school year.”

“The job market has changed significantly” over the past few years, Gmitro warned. “Not nearly as many people are willing to take that job.” People are also less willing to move, especially given housing costs, and his “hunch” was that “if you end up with 40 applicants, 20 of whom are viable applicants, I think you will be doing very well” for a September-October search.

Residency is not a requirement in Cambridge, committee members said, although HYA associate Ed McCormick – who will be doing much of the field work for the city’s search – said that “in some districts the superintendent would be criticized for not living in the community.” Member Patty Nolan said that though it “would be nice,” even superintendents hired from another state have not been required to live in Cambridge, citing most recently Thomas Fowler-Finn in 2003-09. Member Kathleen Kelly, pointing out that the city manager also doesn’t live in Cambridge, said it is pleasant for people in those top positions to “come home after a day at work and be able to go to the grocery store” without running into people from their work environment.

When Gmitro asked whether there were internal candidates for the job, there was a long moment of silence before member Richard Harding, leaning back in his chair, called out “we’ll get back to you on that,” followed by a few chuckles from some members.

Gmitro recommended the interview committee – the group that interviews the semifinalists forwarded by HYA, resulting in recommendations of two or three finalists – be made up of about eight to 12 people. He has worked with groups as high as 16, he said, but those people need to be working at a “high level” and not representing interest groups, as otherwise decision-making gets “very difficult and laborious.”

In some communities, the school board as a whole is the interview committee. Cambridge has made a commitment to include community members, joined by one or more School Committee representatives. The discussion Wednesday revolved around who from the community should be included.

With parent and teacher representation clearly a given, some members, including Maher and Kelly, talked about including “business” representatives and community members such as Harvard or MIT representation, and school partners, such as Breakthrough and other after-school organizations. Member Mervan Osborne objected, saying getting their input was important, but the act of deciding on candidates should be left to the School Committee, school staff, parents, and maybe student alums. The conversation drifted to the extent to which the schools were “isolated” from the broader community, whether the school mission was clear and what “perceptions and misperceptions” various outside Cambridge organizations have about the schools, before Maher brought the discussion to a close, saying the School Committee would need to decide this in a separate meeting so that they could move on.

Gmitro said that once interest groups were decided on, two good mechanisms for identifying interview committee members were inviting the individual groups to put forth a representative, and for individual School Committee members to each suggest people. Whoever is on the interview committee, he said, will need to plan on dedicating significant, sometimes daylong, time during the first two weeks of October.

The city is soliciting input on the superintendent search at this email address.

This story was updated July 7, 2015, to correct that the mayor intended to post a search timeline, not create a full website to keep residents informed of search issues.