Letter-return rate shrinks housing wait list estimate to 7,385, down by nearly a quarter

Letter-return rate shrinks housing wait list estimate to 7,385, down by nearly a quarter 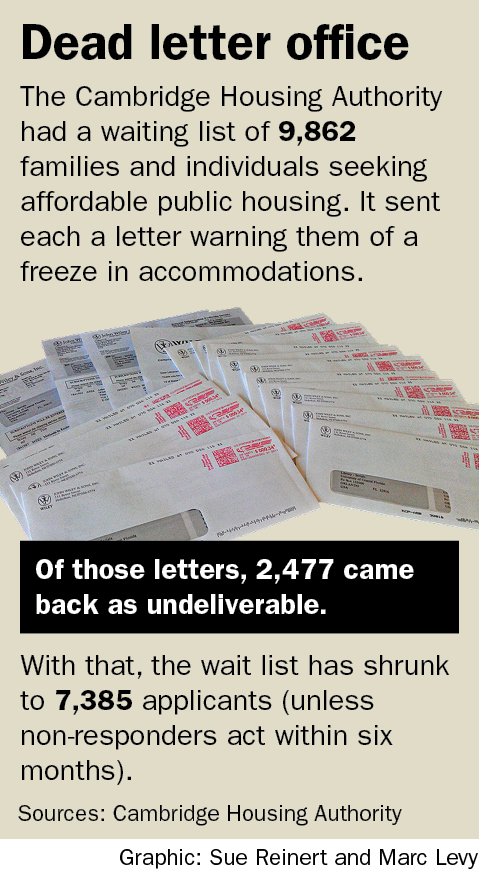 In less than three months, the Cambridge Housing Authority’s waiting list of 9,862 families and individuals seeking scarce affordable public housing in this high-rent city has shrunk to 7,385 applicants. Was it because one-quarter of the people on the waiting list found an affordable place to live? No one knows.

What did happen is that the authority sent letters to every applicants April 23 telling them no one would be offered an apartment for the next two years, saving vacancies for relocating current tenants displaced by an extensive redevelopment project. And 2,477 of those letters came back as undeliverable.

“In accordance with CHA’s policy, those applicants were closed from all program waitlists,” Deputy Executive Director Michael Johnston said in a July 6 memo to city councillors, tenant activists and others who have expressed interest in the issue.

Johnston said in an email that the 25 percent undeliverable rate “is higher than normal, but this is the first time in years” the authority has sent letters to everyone on the list.

The applicants can regain their place if they contact the authority within six months, Johnston said.

Impacts on the waiting list were not discussed at the numerous meetings and hearings on the construction project, being carried out under a federal program called Rental Assistance Demonstration. The authority will use bank loans and private investments to renovate about 2,100 units under the program.

To tap private money, the housing agency is transferring all its public housing to nonprofit affiliates under its control, creating a private ownership structure on paper. Instead of public housing aid, rent subsidy vouchers attached to the property – not the tenant – will enable low-income tenants to live there. Officials have said the $360-million RAD project is the only way they can preserve deteriorating public housing here as federal subsidies dwindle.

The waiting list problem came to light last fall, when authority officials said they would need to close the list to new applicants Jan. 1 and freeze current applicants in their place during construction. All apartments that became vacant were needed for relocation during construction, the agency said.

After councillors expressed concern, officials said they would make available 250 Section 8 certificates to waiting list applicants. These much-desired vouchers allow low-income families to rent a private apartment; the tenant pays 30 percent of his or her income and the federal government pays the rest of the rent.

Not all applicants on the public housing waiting list are jumping at the opportunity, according to Johnston’s memo. On May 15, the authority offered vouchers to 503 people on the list; 264 responded.(The 239 who did not respond will soon be removed from the waiting list, but can be returned within the six-month period).  And of those who answered, 70 said they weren’t interested and will remain on the public housing list.

Johnston said the numbers were understandable given that most people at the top of the waiting list – the first to be offered Section 8 vouchers – have been there for years. Many, especially elderly applicants, are waiting for an apartment in a particular development, he said. “These are the oldest applications and some have either been housed, moved or are no longer interested,” he said.

While construction continues, the authority will continue to offer vouchers until all 250 are used.

Previous story: In small comfort, wait list for public housing may be shorter than thought