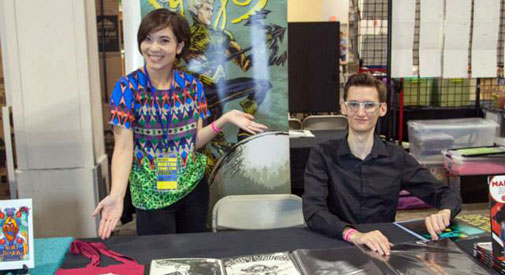 Along with Gillian Anderson of “The X Files,” Billie Piper of “Doctor Who,” Hayley Atwell of Marvel’s “Agent Carter” and Stan Lee and other comics creators who travel the country from one comics and entertainment convention to the next, the eighth Boston Comic Con will have a taste of the hometown.

Participating local artists include Joe Quinones of “Howard the Duck” and “Wednesday Comics: Green Lantern”; Ming Doyle, co-writer on “Constantine: The Hellblazer” and artist of “Guardians of the Galaxy,” “The Kitchen,” “Quantum & Woody” and “Mara”; and Erica Henderson of “Unbeatable Squirrel Girl,” all of Somerville, and several others. Salem husband and wife team Shelli Paroline and Braden Lamb – a Lesley University grad – of “Adventure Time,” “The Midas Flesh” and “The Muppets” are also set to attend.

And New England Comics of Harvard Square, Pandemonium of Central Square and the two Newbury Comics shops of Cambridge will participate as vendors. “Comic fans are always excited to see their local shops participate in the festivities,” convention co-founder Nick Kanieff said.

What was once a one-day event for around 900 comic book enthusiasts has grown into this year’s three-day convention, which Kanieff estimates will be attended by 50,000 people.

Keeping the focus on comic book artists – more than 300 comic book creators are expected – helps the event remain true to its grassroots spirit, Kanieff said. “Boston Comic Con celebrates the comic book artists who bring their stories to life for millions of fans across the globe. They are truly the backbone of the industry.”

“We are home to some of the industry’s most talented artists and devoted fans,” Kanieff said. “They were with us when the Boston Comic Con was just a one-day show that attracted less than a thousand people and we didn’t have any major guests.”

Additional celebrities are to include Thomas Jane of “The Punisher”; Robin Lord Taylor of the television show “Gotham”; Brett Dalton of Marvel’s “Agents of S.H.I.E.L.D.”; Manu Bennett of the TV series “Arrow”; Elvira, the long-running Mistress of the Dark; Bob Morley of “The 100”; Kat Graham of “The Vampire Diaries”; Tyler Posey of “Teen Wolf”; and – for some reason – Scott Ian of the heavy metal band Anthrax. Celebrities will participate in panel discussions, Q&As, photo ops and autograph signings throughout the convention.

Tickets are sold only online, not at the door and range from $30 to $45 by day; and there are separate tickets for celebrity photo ops and other events.

This post took significant amounts of material from press releases. Homepage image of Ming Doyle at the 2014 Comic Con by Robbins Studios.