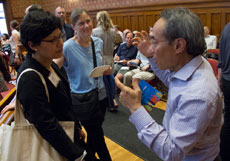 The city’s selection committee will have to determine whether Utile’s engagement and enthusiasm will be able to compensate for its smaller size and weaker experience when compared with Perkins+Will and Sasaki. The teams were interviewed by a selection committee Tuesday and Wednesday, and a decision is expected in August.

The teams had prepared lengthy hundred-plus page packages describing their philosophy, approach and subcontractors, who were legion. They devoted scores of pages to the resumes of people they had selected to work on the project, as required by the city. 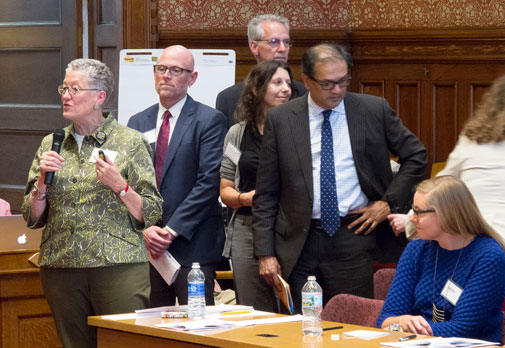 Perkins+Will led off the presentations, appearing the most experienced, but also the most traditional. Principals Geeti Silwal and Karen Alschuler, at Perkins+Will for a combined 27 years, stressed how well and how long their team had worked together. The team also includes Lisa Dickson of Kleinfelder, a Cambridge resident and consultant who has been heavily involved in the city’s climate change vulnerability assessment; Steve Cecil of the Cecil Group, who worked on the Connect Kendall competition organization; and Karl Seidman, the Massachusetts Institute of Technology professor who led the recent “nexus” study recommending the city triple its affordable-housing linkage fee. Like all teams, Perkins+Will included Shuprotim Bhaumik of HR&A Advisors heading up economic development analysis.

Alschuler cited her experience on Boston’s Post Office Square, Rowe’s Wharf and on environmental aspects of Cambridge’s own University Park. Perkins+Will offered up its work on Mission Bay/Mission Rock in San Francisco as its most similar experience to Cambridge. Mission Bay is a 300-acre site that began with 30 percent affordable housing and saw that raised to 40 percent. “We live in a boomtown,” Alschuler said, “just like you do. And the middle class is being pushed out. So this is an effort to broaden the idea of affordability.”

Asked about Perkins+Will’s current work in Cambridge, Robert Brown of its Boston office noted “a fair amount of work in Kendall Square, because of our life sciences group.” Perkins+Will is listed as an architect on two of MIT’s six new projects along Main Street: a research building behind 238 Main, the Kendall clocktower building; and a graduate housing dormitory above 290 Main, MIT Building E39, which houses Rebecca’s Café. The projects will be before the Planning Board for special permits this fall.

Brown said they “may be involved” with teams working on the 14-acre Volpe development which is mid-zoning process. “Right now we’re not on a specific team, we’re not seeing that as a conflict … We are working for a number of entities, and we really try to keep that distance so that we’re not either compromising our work relationship or compromising our relationship with the city.”

Asked by an audience member about avoiding the cynicism of residents who have been involved in previous plans, Susan Silberberg emphasized bringing developers and members of the community to the table with a shared set of metrics.

With respect to the Alewife area, which the city has specified as an early focus of the Citywide Planning effort, Silwal cited a commitment to “tactical urbanism, which is pilot projects” and suggested the firm would be making small experiments on small blocks and testing the development market’s appetite for responding to incentives for goals such as affordable housing.

Perkins+Will declined to provide an electronic copy of its submission in June until told that all other teams had furnished copies. 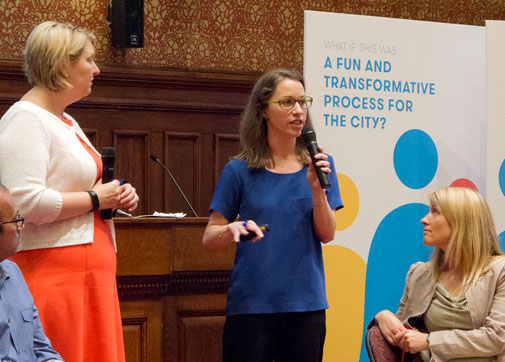 Brie Hensold and Gina Ford from Sasaki gave the second presentation. Hensold and Ford, an urban designer and landscape architect respectively, are Watertown-based and lead a team of 39 people. They lauded Cambridge’s commitment to the environmentally friendly Net Zero standard of building and the Cambridge Conversations effort that preceded the master planning initiative. They want “Cambridge to feel like one city; now it feels like multiple cities,” they said in a video presentation, and expressed concern about gentrification.

Hensold emphasized openness to ideas from the public, and their grounding in data. “Data is also one of our problem-solving tools for difficult discussions, or for when there’s disagreement. If we can have the facts, share the facts, it helps us move those conversations forward.” Sasaki referred to online and data tools they would develop, but did not offer many specifics on how those tools would work.

The Sasaki team includes local transportation consultants Toole Design; Eleanor Pries from SiteLab urban studio, one of the finalists in the ConnectKendall open space design competition; the ever-present Shuprotim Bhaumik of HR&A Advisors; and a host of other members. Hensold and Ford have worked together for “nearly a decade,” they said.

For past experience, the Sasaki presenters noted work with HR&A on “the Lawn on D [Street]” in Boston’s seaport district (in conjunction with Utile), but emphasized Raleigh, N.C., where they led the development of a downtown master plan. Describing the Raleigh work, they alluded to the racial and ethnic challenges of Cambridge by looking at Raleigh’s Moore Square, an area that historically “belonged to the African-American community within the city; over time it’s become a degraded landscape, one that people no longer feel safe in,” Hensold said.

“We worked to re-imagine the central park, and also to imagine how city-owned land around the park could be used to accomplish city goals” including affordable housing, Hensold said. She referred to the balancing act between Moore Square’s “new demographic” and its historical one.

The three-year process will allow time to actually implement some portions of a plan, as opposed to a more typical exercise in which planners have left before their recommendations become reality, the Sasaki presenters said.

On Alewife, Nick Jackson of Toole said “one thing that’s immediately apparent … is that it’s missing what makes most of Cambridge great, which is that really dense, fine street network. So we want to look at that as one of the factors in our solution.” 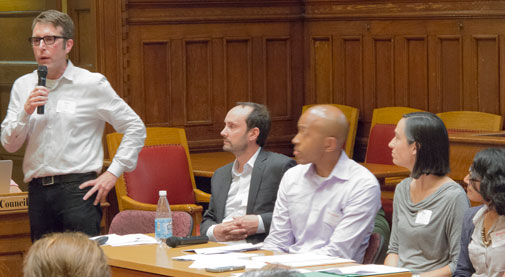 Tim Love from Utile gave the final presentation, choosing a more interactive approach. Describing his team as “the most awesome people,” Love emphasized his personal commitment to be at every meeting and readiness to be at “at least two or three meetings a week,” but also committed: “We promise: no planning fatigue.”

“Don’t reinvent the wheel. Cambridge does a lot of planning,” Love said, showing a slide of 27 recent city planning initiatives (“an unbelievable amount”), from K2C2 to the Lighting Ordinance Task Force to the Green Line Extension.

Asked whether he believed Cambridge already had a master plan, Love said, “I suspect, like archaeologists, if we re-consume and repackage all of [the existing 27 plans], you’re going to have a beginning of a fairly robust plan there that just needs to be put together.”

Introduced as a “planning architecture and design firm located halfway between Downtown Crossing and Chinatown,” Utile has a team that includes Meera Deean and Jonathan Evans; Dan D’Oca from Interboro, a Brooklyn planning and urban design firm; Kaki Martin from Klopfer Martin for landscape architecture; Ona Ferguson from the Consensus Building Institute; Team Better Block, for “tactical urbanism”; as well as, once again, HR&A’s Shuprotim Bhaumik. Unlike other teams, Utile did not present similar work on a citywide master plan, though its written submission included related work on a smaller scale in Somerville, the Boston waterfront and Hartford and New Haven, Conn.

Describing the evening in jest as a film festival, Love showed a video documentary interviewing residents about issues in Cambridge. Fletcher-Maynard Academy teacher Caitlin O’Donnell was featured describing the city’s diversity but “uncertain integration,” as well as the difficulty finding housing she could afford: “It’s almost like we’re cities on top of cities, … people don’t sometimes get to relate to even their neighbors or the people who live just down the street from them.” 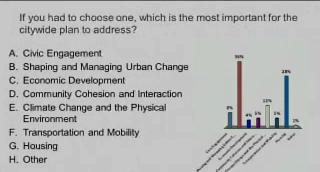 Utile handed out small keypads used by the audience to respond to questions, with real-time results projected on a video screen. They showed 28 percent of attendees had lived in Cambridge for 30 or more years, followed by 21 percent for three or less. Mid-Cambridge, Cambridgeport, North Cambridge and West Cambridge were the neighborhoods with the greatest number of residents in the room. Attendees thought “shaping and managing urban change” was the most important issue for the Citywide Plan, at 34 percent.

Evans showed a series of demography driven maps and pointed out potentially surprising data, such as how high-rent districts surround Harvard and MIT – part of the 40 percent of Cambridge residents who are students – but high incomes are not clustered in the same way. On Alewife, Love suggested it “could be Kendall 2.0” because “developers like their buildings in big fat chunky things … We need to take a hard look at balancing what the market wants with what the community wants, and that will actually make better neighborhoods. For example, Kendall Square would be a better place if 30 percent of the buildings were what we call ‘the fatties’ and 66 percent of new buildings were actually of a finer grain … If you plan for fatties, the international [Real Estate Investment Trusts] will come; if you plan for a mix of parcel sizes, you’ll get a more interesting segment of developers coming at different scales. It makes for a better city.”

Utile presenters said they would train a team of planning students and high-school students to engage residents, because “you have to go where people are; not wait for them to come to you.” D’Oca described typical public meetings and “charrettes” as broken community engagement processes that produced plans that are “not equitable, un-stimulating and not implementable.” D’Oca also said they would try to hold open office hours, perhaps in a pop-up Cambridge office, “if we can get one. What better way to demystify planning than to invite people to come watch planning happening?”

Love also said he would build a case study of an example development, that would give realistic dollar amounts for benefits such as affordable housing, open space and street improvements. “The more transparent we can be,” he said.

Responding to a question about the ability of the public to prioritize the direction of the process and understand tradeoffs, Love said that Utile’s process was not set in stone, and would be a result of a dialogue with city staff and the public. Asked if the public could vote, like in the Participatory Budgeting process, Love responded: “I don’t know, it sounds like a good idea …we’re open to ideas, and if you’ve got good ones, then they’ll probably win.”

Emphasizing their folksy and approachable aesthetic, Love invited the whole room to meet up with his team later that night at The People’s Republik, a bar two blocks from City Hall.

The city released the final report Monday of the Connect Kendall open space design competition, after winners Richard Burck & Associates worked for two months to refine the plan and incorporate ideas from the other finalist plans. The release comes as the city publishes a Request for Qualifications to find landscape architects to develop final designs for the Rogers Street Park, Triangle Park, Grand Junction “porkchop” Park and Point Park in Kendall Square.