Council defers to state on car-service law, but taxi deregulation dangled as possible 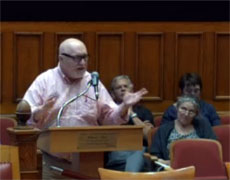 Council defers to state on car-service law, but taxi deregulation dangled as possible

Taxi drivers desperate to fend off the threat of competing car services such as Uber and Lyft got action of a sort Monday from the City Council, including the remote possibility that their entire industry would be deregulated in Cambridge.

“You have these ride-sharing companies that are operating with no rules at all. And on the other hand we have you guys that are operating with over 60 pages of regulations,” vice mayor Dennis Benzan said Monday, referring to the taxi drivers who filled council chambers for its only summer meeting and what they faced: the high cost of buying taxi medallions, followed by fees and fines of up to $500 for picking up fares outside their limited areas. “That’s unfair.”

The order he co-sponsored with councillor Leland Cheung to accomplish this, although it was approved by the council, didn’t enact this sweeping action. The order only asked the city manager to confer with city departments “about the feasibility” of a moratorium on fees paid by taxis to the city. The moratorium would last until new city or statewide car-service regulations were put in place.

Defer the the state

Two other orders were also approved, both urging the state to hurry its overall regulations and level the playing field among drivers for taxis and Uber, Lyft and other on-demand car services. One was by Nadeem Mazen; the other was by Benzan and E. Denise Simmons, who said she sympathized with taxi drivers but felt the city’s only course of action was to look to the state, where three bills are pending.

“It’s not going to be enough if we were to take action, because I just don’t know how we would regulate that,” Simmons said of the city.

City Manager Richard C. Rossi has said he’s met with officials in surrounding communities about the car-service conflict and has sent a regulatory proposal to the governor addressing such things as insurance, driver background checks and car inspections.

Simmons added that it was important for cars for Uber, Lyft and other companies to be identified as livery services, “because that’s what they are, because they are charging people to ride for a fee.”

Two speakers – partners and both council candidates in the November elections – saw a conflict in city officials acknowledging that the car services were operating as taxis, but continuing to let them operate outside the law governing taxis until whenever the state enacted legislation.

“The current state of the law is that they are not legal. The council has no authority to allow government officials to fail to enforce the law while it waits for the state Legislature … nor does the council have the authority to place a moratorium on fees on taxis. It’s simple: The city has to enforce existing laws,” said Kim Courtney, calling the city’s inaction part of a “systemic malfunction” that enforces laws arbitrarily, including through the License Commission.

Xavier Dietrich followed her, citing the city charter to echo her thoughts on enforcement. Because laws aren’t being enforced, he said, “it should come to no surprise to city officials that residents view [city officials] as corrupt and express contempt for them.”

He also cited the commission, which last year seemed to side with a local business owner worried about competition to keep Dietrich and Courtney from opening a wine bar and charcuterie in Mid-Cambridge.

Dietrich’s drift into talking about the commission, although it regulates taxis in Cambridge, was deemed off topic by Mayor David Maher, and Courtney’s mention of resigning commission chairwoman Andrea Spears Jackson enflamed councillor Tim Toomey, who called it a personal attack. The mayor called a brief recess, with most councillors walking out of the room, and Dietrich’s microphone was shut off.

Several taxi drivers also stood during public comment to give long and emotional testimony to their worries about how they would make a living when faced with competition from the less-regulated car services. There also gave some warnings.

Taxi driver Tibor Hangyal said that without a level playing field, taxis would soon be gone – leaving the car services free to triple or quadruple rates whenever they wanted and leaving people in wheelchairs or facing various disabilities stranded, such as because of a dearth of vehicles that can accept wheelchairs. Uber drivers have also been criticized in Cambridge for failing to pick up blind customers and for refusing to allow service dogs.

“You don’t want to lose this friend,” Gervais said. “You want to keep this friend alive.”

Update on Aug. 12, 2015: Courtney and Dietrich requested that their complete statements be posted. PDF versions can be read here for Courtney; and here for Dietrich.