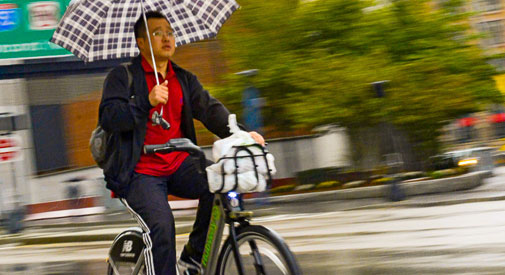 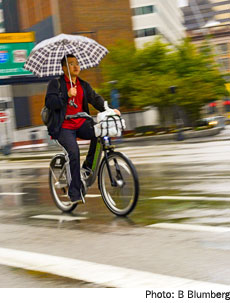 These three residents write in response to “Boston’s roads aren’t meant for bicycles,” an oped column by Jeff Jacoby published Sept. 1 in The Boston Globe.

From Dan Mylapore of Ericsson Street, Sept. 5, 2015: I read Jacoby’s essay with dismay.

We’re all familiar with the travel brochures that exclaim proudly that we are “America’s Walking City.” Open any real estate listing and you will see, in addition to a “walk score,” a “bike score,” and we are also “America’s Biking City.” Many of our neighborhoods rank among the best in the nation, and this is one of the reasons we call this city home.

These high rankings did not come about by accident. It takes effort to build a great city, and both the mistakes and successes are measured one street corner at a time. When the City of Boston sensitively addressed the crash that killed Anita Kurmann by figuring out how to reengineer the intersection to make it safer for all of us, we swelled with civic pride. Those of us who cherish this area know that these are the small things that add up to making Greater Boston a truly awesome place to live, work and raise children.

What Jacoby is advocating displays not only an absolute lack of civic sense; it feels like a throwback to an era before Francis Sargent’s governorship, when plans were afoot to rip out most of Boston’s best neighborhoods and put in a maze of interstates. It just doesn’t make sense, and it is also not how we should be responding to a tragedy on our streets.

From Tom Meek, former member of the Cambridge Bike Committee, Sept. 5, 2015: Jacoby’s column is an irresponsible and backward bit of thinking. Accidents will happen, and yes, they are more lethal when car and bike collide than sedan and SUV. Jacoby waxes on about how nice it is to bike around the Arnold Arboretum and the Esplanade, but suggests cyclists should be “banned from busy roads.” How does he expect a human on a bike to get between such points of recreational tranquillity? Unless Google Earth knows something I don’t, there’s no way to get to the Arboretum but by busy streets.

And to Jacoby’s point that cyclists don’t pay taxes: Of courses we do, or we’d all be in jail. Perhaps he meant the gas tax? We don’t use gas, and as a result help keep our overtaxed planet less so. Furthermore, many cyclists don’t just cruise around the Esplanade for fun; we ride to commute to work and run errands. It’s a way of life Jacoby just doesn’t get. If I were to make my own broad assumptions, I’d say Jacoby got caught behind a cyclist on the drive in, and this twaddle is his pent-up road rage.

From Craig A. Kelley, member of the Cambridge City Council, Sept. 5, 2015: Jacoby’s column was very frustrating for me and many others to read. As a city councillor, I am well aware of how dangerous and, too frequently, deadly our streets can be for cyclists. As a father, husband and cyclist whose wife and children have all been hit by errant motorists, I know how important it is that Greater Boston community roads be built for common uses that do not sacrifice safety for convenience.

In some ways, Jacoby is right. Collisions between bikers and drivers frequently occur at busy intersections, but the answer is not to ban bikes from urban areas. The answer is to plan for, and build, safer bike infrastructure using real data. The answer is to more aggressively train divers and cyclists to coexist. The answer is to adequately enforce, and perhaps even change, relevant traffic laws. There are many ways to plan for Greater Boston’s future transportation needs, but banning bikes from busy streets cannot be one of them. The solution is to make these busy streets safer for all of us who use them.

As a city councillor of 10 years, I have seen the influence of ideas such as those expressed in Jacoby’s letter diminish how we imagine the cities of the future. Cyclists, pedestrians, cars and trucks are all going to be part of the urban transportation fabric – we cannot throw cyclists under the bus, literally or figuratively.

This post was updated Sept. 9, 2015, to correct Tom Meek’s status with the Cambridge Bike Committee and Dan Mylapore’s street name.