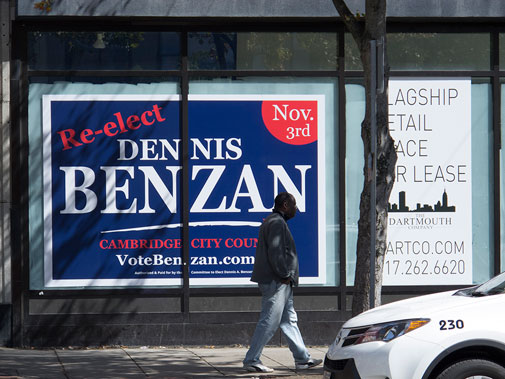 Vice Mayor Dennis Benzan’s 76-square-foot campaign sign in the window of 565 Massachusetts Ave. is nearly four times the allowable size, and Benzan says “at some point in time, the sign will be replaced.”

The Cambridge Zoning Ordinance strictly limits the quantity of signage on buildings, but it contains an exemption for political signs and other non-commercial temporary signs – for signs that are 20 square feet or less. At 76 square feet, the Benzan campaign’s sign is 3.8 times the allowable limit.

“A mistake was made,” Benzan said Monday, saying he had ordered a sign within the rules. He was unable to say when the large sign would be removed.

“We accept responsibility and we will get it rectified,” Benzan said when asked why the sign could not be removed immediately and replaced with a smaller array of standard yard signs he has available.

Benzan is a first-term councillor running for reelection Nov. 3. There are 23 candidates running, with all nine incumbents seeking reelection.