‘Black Mass’: Glittering star turns enliven, but many of us already lived through this 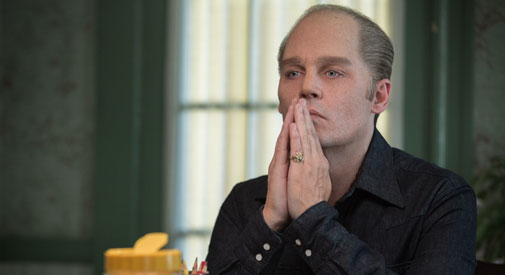 ‘Black Mass’: Glittering star turns enliven, but many of us already lived through this

“Black Mass,” the long-awaited cinematic tale of Boston’s own public enemy No. 1 – mobster Whitey Bulger – is a mixed bag, full of diamonds in the rough and a few precious gems. In crime terms, it’s a routine hit on a midlevel bagman carried out with gusto and flourish, but what’s most winning is the spot-on execution by Johnny Depp as Bulger. It’s part Jack Nicholson, part Ray Liotta and 100 percent convincing. The other actors stand tall as well, delivering big in supporting roles that deepen the depiction of the bloody mayhem that ran rampant in South Boston for 20 years starting in 1995, as Bulger’s role as an FBI informant allowed him to commit murder with the full knowledge of his handlers. 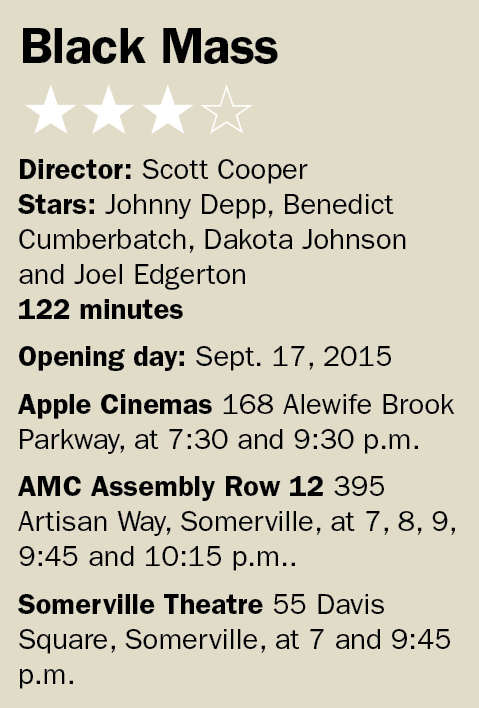 The story of how Bulger undermined the North End Mafia and rose up to became the city’s criminal kingpin, then vanished for almost 15 years, all while being the brother of Massachusetts’ most powerful politician, always seemed bigger than the papers it was printed on (or for the broad screens of the first generation of flat-screen TVs sold at Lechmere). Here, in the hands of director Scott Cooper, who did well with “Crazy Heart” (2008) and “Out of the Furnace” (2013), the narrative become a bit too broad to settle in and gel. It’s choked with details and not enough nuance. That’s understandable in part because it is based on the book “Black Mass: The True Story of an Unholy Alliance Between the FBI and the Irish Mob” by Boston Globe reporters Dick Lehr and Gerard O’Neill (since retitled “Black Mass: Whitey Bulger, the FBI, and a Devil’s Deal”), but still, screenwriters Jez Butterworth (“Edge of Tomorrow”) and Mark Mallouk never free themselves and take chances. The framework of FBI interrogations, whether in the now or in flashbacks, doesn’t add much; it only cuts into Depp’s screen time as his steely-eyed Whitey and his posse off gruesomely anyone who looks at them the wrong way. There’s also the late development in which O’Neill and Lehr drop in as Bernstein and Woodward on the case.

Despite Depp’s sure-to-be-nominated performance – he’s nearly unrecognizable, as far from Jack Sparrow as one could possibly get – Bulger is the central figure but not the film’s glue. Sure, the filmmakers try to show a soft side (the Whitey who cared), but at the end of the day, he’s a sociopath with a murderous temper. The real sauce comes in digging into the people around Bulger who sat on the other side of the law, namely his brother Billy (Benedict Cumberbatch), the powerful state senator. The film toes Billy’s line that he had little involvement or knowledge of his brother’s doings, though it shows they spent plenty of holiday time together at mom’s. The match that ignited Bulger’s reign of terror (he was credited with 19 murders at his trial) and the source for the whole gigantic law enforcement fail comes in the riveting characterization of John Connolly (Joel Edgerton, delivering the most driving, yet subtle, performance in the film) as a power-hungry FBI agent looking to get up and thus spinning his childhood alliance with Whitey and Billy in the same housing project in Southie into a boondoggle of cover-ups and misinformation that led indirectly to several people being murdered. The quest for advancement and hubris are right out of a Greek tragedy, and though we know how it ends, it’s glorious and cathartic to behold.

Cooper and crew do a top-notch job of capturing the essence of Boston – far better than “The Departed” did even while dialing the clock back to the ’70s and ’80s. The rest of the cast, especially Kevin Bacon as a scrutinizing FBI overseer and David Harbour as John Morris, Connolly’s FBI yes man, really power the film in invaluable ways. The one disturbing thing you learn at the end of the film is that Bulger strongman Kevin Weeks (played by Jesse Plemons) and hitman John Martorano (W. Earl Brown), who confessed to 20 murders, are now out and walking the streets of Boston somewhere. I was wondering if they were at the Coolidge Corner Theater premiere I was at (yes, the one with Johnny Depp on the red carpet that shut down Brookline) and what they think of the film. They lived it; so did brother Billy, and many on the streets in Southie. The rest of us are left with a Hollywood depiction that, while gritty and compelling, feels less larger than life.