Discarded cigarette blamed for $5 million damage to school project, on track in Dec. 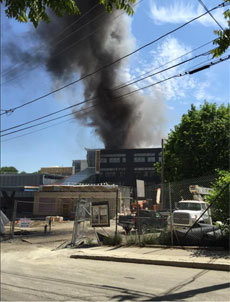 Discarded cigarette blamed for $5 million damage to school project, on track in Dec.

Smoke billows from 100 Putnam Ave. during a May 30 fire. (Photo: Only in Boston)

The Martin Luther King Jr. School and Putnam Avenue Upper School campus will be turned over to the School Department in December, with inaugural classes coming shortly thereafter, according to an email sent Monday by city officials.

A May 30 three-alarm fire delayed the campus’ opening by causing around $5 million in fire, smoke and water damage on the third floor and roof, including to its covering and insulation and a number of HVAC units. Originally the campus was to open in September.

An investigation by the Cambridge Fire Department and state police has been completed, the city said, finding that the fire was accidental – “a result of careless disposal of smoking material.”

Some blame for the start or spread of the fire had been placed on untreated roofing materials, considered highly combustible on a hot, windy day, but fire officials said an investigation into the fire would be long and completed in no certain time frame. City Manager Richard C. Rossi said  shortly after the fire that “the state fire marshall has still not given us a an official response [on cause] except to say that this was not arson in any way. This might have been some casual error.”

On Monday, Rossi said the city’s contractor, Newton-based WT Rich “has done an extraordinary job of ensuring the timely restoration of the building to its pre-fire condition. They have produced a first-class educational facility for the Cambridge community.”

The full statement about the fire investigation:

“Based on information developed through the investigation, it is the opinion of the Cambridge Fire Investigations Office that the origin of this fire was in the area of the low burn patterns located on the roof where the vertical framing for the HVAC and exhaust enclosure intersected with the horizontal roofline. After eliminating all other potential ignition sources, the cause of the fire has been ruled accidental as a result of careless disposal of smoking material.”