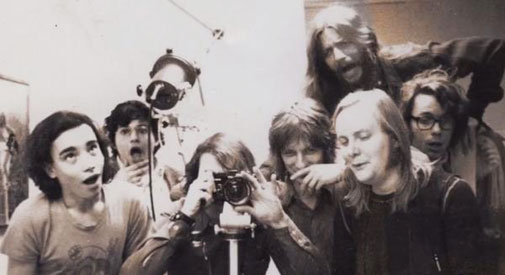 Add another film festival to the list of those calling for attention in Cambridge and Somerville’s crowded calendar.

The GlobeDocs Film Festival, celebrating nonfiction works, takes place Oct. 7-11 and includes screenings in Boston, Brookline and Cambridge. In fact, only one of its dozen feature-length films (there will be a program of short films too) will be screened in Cambridge: “Drunk Stoned Brilliant Dead: The Story of the National Lampoon,” which get its area premiere at 7 p.m. Oct. 8, at Landmark Kendall Square Cinema, 355 Binney St., Kendall Square.

It’s natural that director Douglas Tirola’s documentary is the one to run in Cambridge: The comedy mag was the offspring of Harvard’s comedy magazine, the Harvard Lampoon. Tirola uses rare footage and interviews with National Lampoons fans and founders to chronicle the history of the magazine, which came to define 1970s humor as its staff went on to write and star in “Saturday Night Live” and create movies such as “Animal House” and “Vacation.”

GlobeDocs is itself the offspring of another media entity: The Boston Globe, which has brought on Lisa Viola as director of programming and curator of the GlobeDocs Film Festival. Viola is also programmer for the Provincetown International Film Festival and Sundance Film Festival.

Other films will be screened at the Bright Family Screening Room at Emerson College and the Coolidge Corner Theater. (As of Sunday, Jonathan Hock’s baseball documentary “Fastball” didn’t have a set location.) The film festival launches HUBweek, a weeklong celebration of art, science and technology in Boston.

The Globe is simultaneously getting into best-of territory with the Oct. 6 sports awards ceremony event The Globies – nor surprising for a paper owned by Red Sox magnate John Henry.

But Linda Pizzuti Henry, the Globe’s managing director and John Henry’s wife, explained why a documentary film festival makes as much sense:

“There are so many reasons why Boston is a natural home for a documentary film festival. We have some of the top documentary programs shaping and pushing the boundaries of filmmaking at universities here. We have a smart and engaged population that is interested in the deep, thoughtful and thought-provoking storytelling that documentaries excel at delivering. We have many of the leading lights of documentary film living in our midst. Local producers such as WGBH are the largest producers of public television nationally.”