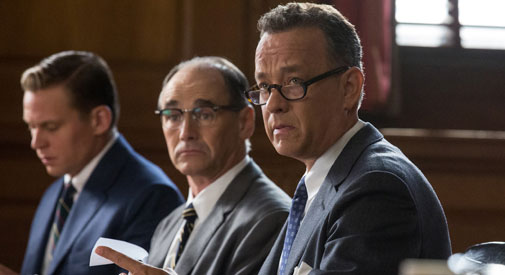 When people think about the body of work Steven Spielberg has put out over his illustrious 50-something-year career, most gravitate toward the fantastical fantasies of childlike wonderment (“E.T. the Extra-Terrestrial ” and “Close Encounters of the Third Kind”) or the satiating swashbuckling adventures (”Raiders of the Lost Ark” and “Jurassic Park”). Before all that, however, Spielberg minted the blockbuster with “Jaws” and later – with stark, visceral effect – crafted the preeminent cinematic portrait of the Holocaust in “Schindler’s List,” still resonating as a raw, exposed nerve across time. Now clearly a trend, the solemn lessons of history, more so than adolescent curiosity or high adventure, have become the inspiration for Spielberg’s creative vision. 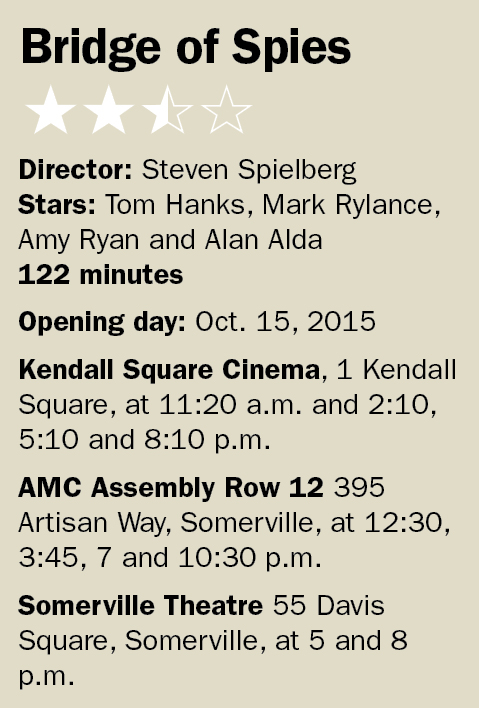 His last lesson, “Lincoln,” was both a plumbing of character resolute in the face of opposition and of the society underneath in changing times, confounded by murky political agendas. The director’s latest, “Bridge of Spies” follows the same blueprint, but James Donovan will likely raise a few eyebrows as hero. The insurance attorney from Brooklyn doesn’t have quite the historical punch or adoring lore as Abraham Lincoln, an icon nearly synonymous with steadfast righteousness; he’s a hundred years behind in that game, and the backdrop for his conundrum, the Cold War, isn’t nearly as ideologically complex or polarizing as slavery and civil war.

More relevant from the history book perspective, perhaps, is Francis Gary Powers, the U-2 pilot shot down over Soviet airspace and taken prisoner in 1960. “Bridge of Spies,” in part centers on his ordeal as Donovan (played by the ever affable Tom Hanks), a regular joe, is engaged by the CIA to negotiate his release. How Donovan got pulled into the global game of cloak and dagger and his odyssey from scorned public pariah to Red Scare hero becomes the backbone of the film. This being a Spielberg movie, there’s another large focus on Donovan’s family life, and just to make sure, the Oscar-nominated Amy Ryan gets stirred in by heaping handfuls as Donovan’s spouse, cooking up Ozzie and Harriet staples.

Interestingly too, as this is a a fairly signature Spielberg spin: The project’s penned by the brothers Coen (Ethan and Joel), reworking the script of Matt Charman (“Suite Francaise”). It’s an odd marriage, the family-friendly Spielberg and the arty quirksters with such dark delves as “No Country for Old Men” and “Blood Simple” to their credit. Anything even remotely Coen-esque gets sucked under. In Spielberg’s warm embrace of the late ’50s, you feel the part begs for Jimmy Stewart in his prime, so that’s essentially how a perfectly cast Hanks plays it – channeling the screen legend’s wholesome, Frank Capra goofiness.

Donovan’s arrival in the hot seat to free Powers comes after he’s roped into defending captured Russian spy Rudolf Abel (played with great nuance by stage actor Mark Rylance). For such an outwardly unpatriotic thing, even though he’s following the law of the land, Donovan’s house gets shot up. He’s Atticus Finch fighting the bad fight when coded letters roll in allegedly from Abel’s spouse in a Germany getting walled apart, and the downing of Powers (Austin Stowell) folds in with hospital-corner perfection. The CIA, because it can’t get involved in direct communication or an exchange, digs its hooks into Donovan, who tells his family he’s on a salmon-fishing trip in England when he’s bunked up in unheated dregs in Germany while his handlers cool their heels at the posh hotel down the street. Donovan’s a total fish out of water. He’s not heroic or a master gamesman, but like Stewart’s everyman he remains ever dutiful, even after an East German street gang robs him of his outer garments in the freezing cold and he realizes the people presented to him as Abel’s family are clearly plants.

The snag in the whole subterfuge hits when Donovan has a sudden crisis of conscience. He gambles with great stakes; unfortunately, Spielberg and Coens don’t. For something with so much hanging in the balance, the film feels airy. The same could be said of “Lincoln,” but there, the actors gnawed the bejesus out of the woodwork – and, let’s face it, Donovan is no Lincoln. Working with an equally remote nodule of history in “Munich,” following the Mossad in the aftermath of Black September, Spielberg hit it home with heartfelt souls and genuine intrigue. The film effortlessly engaged and gripped, whereas “Spies” too heavily (and slackly) relies on the grand backdrop of the Cold War and the pandemic anxiety of the time. History has since recorded the fall of the Iron Curtain and Berlin Wall. When all was said and done, it was more about stressful chest beating than actual blood shed.