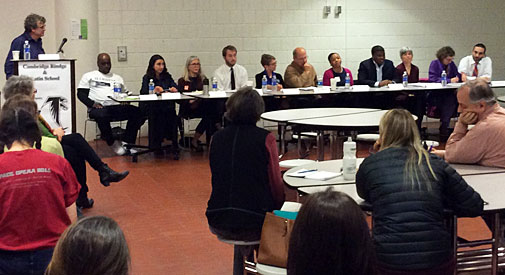 The eleven candidates for School Committee had their final debate Monday at Cambridge Rindge and Latin High School, with incumbent Richard Harding telling the crowd of nearly 70 people in opening comments to listen carefully, because “there are important differences between us.” But what came through loudly were the many similarities.

Each person – campaigning experience showing in improved deliveries since their first debate – touched on the importance of improving equity in opportunities and achievement in the schools, community engagement and family and student support, and social emotional support for all students; strengthening partnerships with neighboring organizations and businesses; and of curbing standardized testing; and they articulated often similar individual visions for the schools.

Moderator David Vogel, a leader of debate hosts the Friends of CRLS and the CRLS Alumni Association, started by asking each candidate how best the committee can support community engagement. Challenger Jake Crutchfield said this is an area “he has been incredibly passionate about – it is work I have already been doing.” His background in Cambridge community organizing and substitute teaching has had him doing a lot of outreach, he said, and “going to where people live.” He advocates for committee members going to school council meetings, spending much more time in community settings and using its subcommittees “more proactively” by including community members.

Challengers Emily Dexter and David Weinstein, along with incumbent Fran Cronin, agreed about reaching out, suggesting that the committee do joint events with city groups and organizations. Weinstein, a longtime classroom teacher who is now a communications professional, referred to his communications expertise and experience on the Graham & Parks School steering committee. He, Dexter and challenger Elechi Kadete stressed the need to talk with families in languages “other than English” and improve “cultural competency.”

Challenger Manikka Bowman, conscious of the end of the “20th century world” of two-parent families where one parent could focus on school issues, said there should be “conversations around how do we have models of communication in the 21st century world? How are we leveraging technology?”

Incumbents Kathleen Kelly and Patty Nolan talked about their work this term encouraging school-based community and family engagement. They wanted engagement starting early, and Nolan stressed building on the work of existing successful organizations, naming FOCRLS as a model that, among other things, provides financial support for students. Nolan, Weinstein and Crutchfield advocated for strengthening direct connections between classrooms and the city – bringing parents into the classroom to support teachers or share expertise, increasing internships for students in the city and boosting “citizenship” among students through better understanding of Cambridge and its government.

“I attend almost all the meetings of all of these groups,” 32-year incumbent Fred Fantini said. “I am very engaged.” School organizations “need to prove themselves,” but once they do they deserve district funding, he said.

Challenger Pia Cisternino said “it’s not that hard to find out the needs of the community,” but follow-through is missing. “Ask the people for whom the system is not working,” she said, including parents of special-needs children, any parent with a hardship and people who have chosen to leave for charter or private schools. “The goal of family engagement is to meet the needs that the community has,” and it’s those the school department has often failed to systematically address.

“My voice is clear and present and always there,” 12-year incumbent Harding said. “I speak truth to power.” Pointing out that there “are not many minorities in this room,” he said, “it’s very much what it’s like at the School Committee.” Going forward, he said, the district has to become “more user friendly,” improve lines of communication and create a “parent university” to school parents on school.

Rigor and graduation success at CRLS

A question about what happens to CRLS graduates after school brought more agreement. Although graduation and college acceptance rates have been high, Vogel said, college success rates for first-generation college students have been “very disappointing.”

This led to a discussion on the distinction of honors and “college prep” classes. Harding identified it as a misnomer – “if you are taking CP classes,” he said, “you are going to take remediation classes in college.” There was widespread agreement the split is problematic not just because of the under-preparation of students for college in CP classes filled overwhelmingly with minorities, but because honors classes consist overwhelmingly of white students.

The candidates agreed on the need to expand relationships with out-of-school partners to provide support for students still in high school, but also help bridge them once they go to college. Kelly touted work with Fantini and Cronin better aligning CRLS with expectations at Bunker Hill Community College.

Dexter, who has many years’ experience as an educator and researcher, talked about the need to ask for the right information to “put a spotlight on the problem.” The data, she said, can help identify what leads to problems, and said alumni need to be involved to be asked “What did you need that you didn’t get?” Then, she said, “we need to convene the right partners” to develop solutions.

Nolan said the data show lack of funds is one reason Cambridge grads leave college, and stressed “really good financial counseling,” including identifying “lots of scholarships that we don’t know about.” Bowman pointed her work with a Boston partnership of schools and private philanthropy, and Fantini and Cronin brought up their support of programs such as U Aspire, intended to improve student access to college counseling. Several candidates wanted CRLS college counselors better supported and resourced.

Kadete, running for a second time, spoke as a Cambridge Public Schools grad. “This not only affects first-generation college students,” he said, “it also affects children from high-income families.” Kadete, who went on to graduate from Brandeis University, said many of his friends from CRLS didn’t finish college, some for financial reasons, and many did only with huge student loan debt. “We have to really think about the entire school system,” he said, and better support for guidance counselors.

“The appropriate role is to do as little as possible,” Nolan said of standardized testing, and she wasn’t alone. Each candidate addressing testing wanted to see much less of it. There was a call for other assessment tools – student portfolios and project-based work – and more time on teacher-led creative instruction. Fantini said Cambridge “needs to develop our own assessment based on our values” and worried teachers are leaving because of increased assessments coming down from other sources. Crutchfield said assessments should go back into teachers’ hands, not even “handed down from central administration.”

Cisternino explained how she helped start a grassroots movement, called Cambridge Citizens for Public Schools, pushing for “Less Testing, More Learning.” Advocacy for her then first-grade daughter led to the discovery that Cambridge assesses 6- and 7-year-olds 32 times in a year, she said. Cisternino “is not convinced that a standardized [MCAS] test needs to be a graduation requirement,” as it is statewide.

Recent attention on sexual assault and consent at colleges led to a question of what CRLS should be doing to prepare students.  Again, members showed considerable agreement that students should have safe environments for “open discussions around gender and sexuality in high school,” as Kelly put it.

Kelly mentioned discussions the committee has had this year about the high school dress code, a point Bowman touched on as well. The dress code – which includes a very long list of things girls should not wear but a very small list of things boys cannot wear, Bowman said – “in and of itself perpetuates rape culture” by objectifying girls and suggesting their bodies and clothing “distract” boys. Bowman, who has double masters’ degrees in urban studies and theology, said one of her top three issues as a candidate is to support girls and minorities. “It’s not right to put that burden on girls alone,” she said, aiming to “elevate girls in our school system.”

Crutchfield agreed, adding that “we need to do more to educate young male students about how crucial this is.”

Vision for the district

The committee has spent a lot of time in the past months talking about the lack of a long-term plan or vision for the district, but deferred creating one until after hiring a new superintendent.

But many candidates quickly, succinctly and passionately laid out a vision of what they would like the high school, and often the entire district, to look like.

“Excellent, rich, joyful, individualized, differentiated education for all kids,” Weinstein said. “Model schools with regard to diversity and respect.”

“Strong adult relationships, social emotion space, every student would be bilingual, required honors for every student in the ninth grade, everybody taking physical education or sports, everyone has a physical portfolio of work – something hands-on,” with racially diverse honors and advanced placement classes, among other things, Nolan said exuberantly. (“I couldn’t top that,” said a smiling Kelly.)

Kadete rattled off a list including junior kindergarten for all, full support for teachers and principals, “algebraic thinking” by the sixth grade and strong family engagement, family liaisons and counseling in the family’s language, as well as taking advantage of Harvard, MIT, Google and other nearby organizations. (“Talk to me after, I’m not done,” he shouted laughingly as his time ended.)

Dexter and Cronin added “flexibly pathways” that included full exploration of alternative interests, vocational education and different types of learning environments – such as seminars and externships. Cronin wants to “get rid of CP classes” and Fantini agreed, while also wanting to add an International Baccalaureate program in junior and senior years of high school. Weinstein and Crutchfield also added the teaching and enforcing of “citizenry” inside and outside the classrooms. Cisternino added more project-based learning at all levels and play-based learning for young students.

At the end, as the candidates made their 30-second closing comments, more than one suggested that the audience should vote in all 11 candidates.