‘Suffragette’: Women go to war in 1900s, just in time for struggles of 21st century 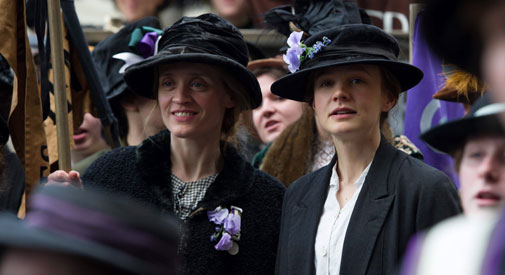 ‘Suffragette’: Women go to war in 1900s, just in time for struggles of 21st century

How surprising is it to learn that Sarah Gavron’s “Suffragette” is the first film about this movement? I tried to think of others, particularly those directed by women, and the only one I could think of showing someone from the suffragette movement was Mrs. Banks in “Mary Poppins” (1964). With sexism in Hollywood being addressed more vocally than ever, this couldn’t have come at a better time, and it’s an empowering and moving portrait of the fight for equality and its toll on the women who fought it. 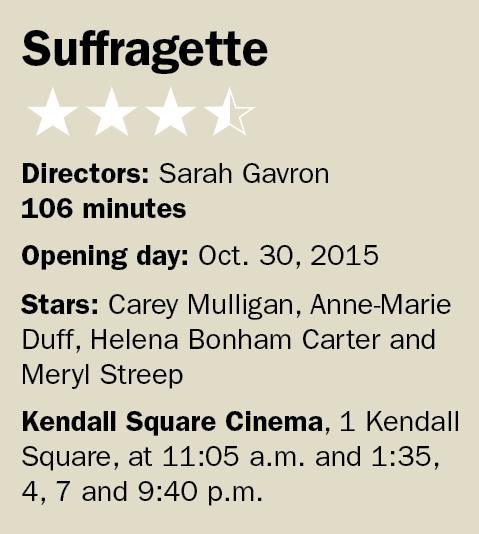 Maude (Carey Mulligan) is a factory worker who hasn’t thought much about the tough deal she’s been dealt with in life, content to work through her days with her husband Sonny (Ben Whishaw) and young son until her body breaks from the work. She witnesses sexual assaults on girls in the factory, but doesn’t raise her voice. All of this changes the day she sees civil disobedience in the streets – women tossing stones into shops, shouting “votes for women.” Her mind isn’t immediately changed, but her life has taken a detour onto a radicalized path. She soon meets the often-battered but always cheerful Violet Miller (Anne-Marie Duff), the pragmatic and lieutenant-like Edith Ellyn (Helena Bonham Carter), the woman who makes history during a day at the races, Emily Wilding Davison (Natalie Press) and the famous, on-the-run speaker of the movement, Emmeline Pankhurst (Meryl Streep). Awed, Maude begins to speak out. It’s not long before she’s finding herself jailed, alienated from family and friends, and forced into making life-altering choices in the name of equality and freedom.

Maude is at first a woman of little words, but Mulligan has a beautifully emotive face. Her facial tics, quirked eyebrows, expressive eyes or downturned mouth let us know all we need about what Maude is feeling, and why she chooses one course of action over another. As the film progresses she begins to grow more vocal, and she punctuates each argument with passion. It’s yet another subtle and moving performance by the actress, and the film is lucky it’s her shoulders it rests on.

The supporting cast is all-around great, particularly Duff and Bonham Carter (giving one of her most subdued performances in quite a while).

Where the film falters is the script by Abi Morgan, which leans toward the heavy-handed. The conversations between Maude and Inspector Arthur Steed (Brendan Gleeson) in particular rely on overwrought monologues of what it means to be a woman of that era. The words are also often accompanied by a swelling score that makes sure we know just how important they are, but these moments are so dripping with genuine feelings of fiery empowerment that it’s hard to let it distract from the message.

The film isn’t timid about showing the violence facing these women, and there are moments in which Gavron shoots “Suffragette” as if it were a war film – in some ways, it is. These working-class women were the soldiers of their revolution; they fought battles and rallied against Parliament; they were wounded and faced brutality, staged hunger strikes in prison and were awarded with medals of honor upon their first release. They were forced into the trenches by a society that saw them unfit to vote and lesser than their male counterparts. The theme is unfortunately timeless, and Maude’s fight in early 20th century London resonated with me.

I was incomparably moved by this film. It’s wonderfully acted and excitingly shot, so even when the script sometimes fails the performers, the people in front of and behind the camera keep it grounded.

This post was updated Oct. 30, 2015, to correct which earlier film included a suffragette character.