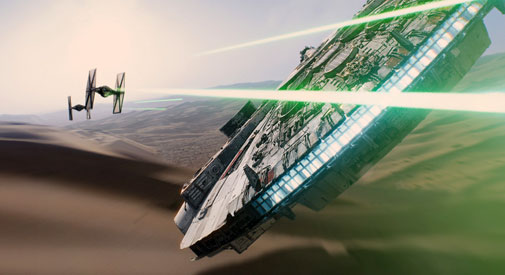 Fans of “Star Wars” who hated the politics in the film epic’s trilogy of prequels may have to change their mind – because it may be city councillor Leland Cheung getting them in to see “The Force Awakens” when it premieres next week.

The first showings for the movie are largely sold out, but Cheung has rented a 100-seat theater at   the Assembly Row AMC theater for an 11:59 p.m. Dec. 17 private showing.

“Instead of the usual holiday political fundraiser, and in celebration of this momentous occasion, we rented a theater for the first public showing of ‘Star Wars VII,’” Cheung said in an email to supporters. “Instead of the normal speeches, we’ll gather to hear about galactic politics.”

Cheung said he rented his theater six months ago, discovering that many other theaters had been rented a year ago by fans of what had been George Lucas’ science fiction universe.

The night starts at 9:30 p.m. at Fuji: Assembly Row at 320 Canal St., Somerville, for “Star Wars”-themed cocktails and dinner, with the 1983 film “Return of the Jedi” (the original, pre-CGI version, “of course,” Cheung said) playing to catch people up on the story before heading over the the theater.

“If you follow the City Council, you know I have a predilection for working in ‘Star Wars’ quotes and references during debates,” Cheung said, but it’s been 32 years since “Return of the Jedi” and 10 years since the third movie in the prequels came out. “Next Thursday we’ll get new material to work with.”