‘The Big Short’: Taking bets on true disaster that took down America (and it’s a comedy) 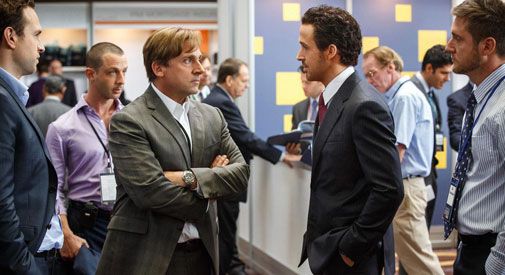 ‘The Big Short’: Taking bets on true disaster that took down America (and it’s a comedy)

The 2008 economic meltdown, that mega-shitstorm triggered by avarice, complacency and cronyism that left the taxpaying public with a mop and bucket even as many lost their homes and jobs, was no laughing matter, but it gets a sharp-witted rewind anyway in Adam McKay’s “The Big Short.” 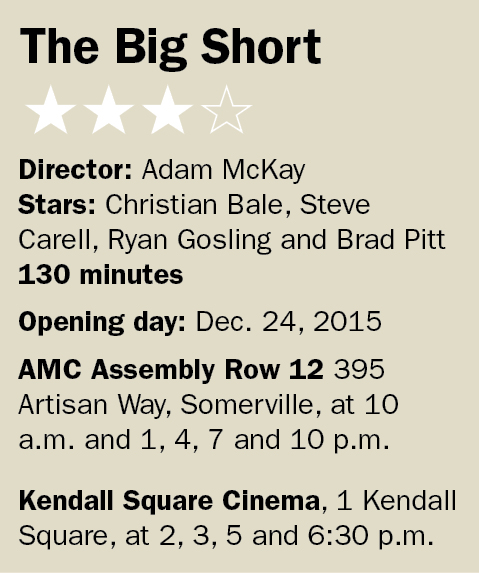 Back in 2010, Charles Ferguson’s documentary “Inside Job” made a point of big money’s deep connections to the White House, regulatory agencies and academia. Who ran Capital Hill didn’t matter; red and blue allegiances were irrelevant as long as the talk on the table was about more green. McKay’s “Short” homes in on the gamblers who profited from that giant economic sucking sound, those who were alert to the rigging of the system and rampant neglect and, in the end, opted to hedge it. You could call them visionaries or vultures and both would be true; the film, however, paints them as more accidental heroes, opportunists and scientists who saw the sky falling and, when no one took them too seriously, put their money where their mouth was.

McKay’s best known for the “Anchorman” comedies, so tackling serious material from author Michael Lewis (the guy responsible for “Moneyball” and “The Blind Side”) about the inner workings of complex financial instruments might seem like a stretch. But McKay’s sense of satire and lightness in the face of darkness pays off nicely – not always mind you, but enough, and it helps tremendously that he’s blessed with an A-list ensemble who clearly went deep in preparation for their roles.

Ironically (or poetically, as some may see it) “The Big Short” unfolds something like an Irwin Allen disaster flick, with a cast of many from different classes, backgrounds and locales. On the West Coast sits the socially inert Michael Burry (Christian Bale), a doctor turned financial guru. He wears flip-flops and T-shirts and listens to metal. He’s something of a rebel slacker, but is absolutely dead on with numbers and forecasting – though it doesn’t take a brain surgeon to look inside one of these subprime mortgage bundles labeled with an A prime rating and see the toxic poison of over-leveraged loans about to default. You just have to look, but no one did until Burry uncovered the imminent subprime implosion we now know as one of the greatest Ponzi schemes ever.

To make all the spreadsheet jargon digestible and less dry, McKay engages several “humorous” cutaways to shake up the mood. There’s one to the comely Margot Robbie sipping champagne in a hot tub and another to Selma Gomez and Anthony Bourdain at a poker table. They’re meant to give the audience the CliffsNotes asides so we’re educated and in on a game that’s moving faster than a hot auction. It’s an intriguing novelty that unfortunately doesn’t hold much value, especially when you already have Ryan Gosling’s Jared Vennett, a smarmy broker giving the retrospective “Goodfellas”-esque voice over. He, like Burry, gets wind of the inevitable collapse and starts to bet against the financial institutions perpetuating it.

Also with Vennett is uber-cynical hedge fund manager Mark Baum (Steve Carell, adding some pudgy padding for the part), a cantankerous sort who has no tolerance for the soft sell and upends nearly all business engagements with shrill, to-the-point candor. To hear him call bullshit at a convention of mortgage-backed bond sellers in Vegas is one of the film’s most inspired moments. In fact, if Carell and Bale have any undoing, it’s the other (and in the middle you have Brad Pitt as a bearded old investment wizard who’s grown sick of the game and gone off the grid, but is reluctantly pulled back). They both give such robust and colorful performances they practically demand their own film, and it will be interesting to see how the Academy judges – will they both be nominated, or does such a potpourri of of riches cancel each other out? Ultimately it’s McKay and us the audience who benefit from such genius quirk and pomp. The film flies by, a wicked spin through a wicked time when everyone was guilty, no one was held accountable and the winners, who risked it all, felt like losers amid the devastation and loss.