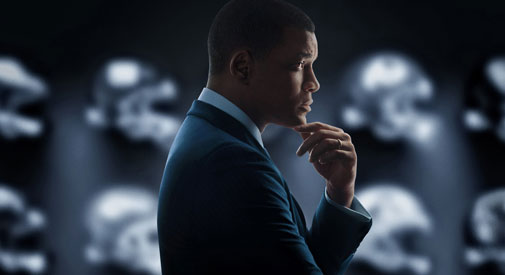 If there’s one thing about “Concussion,” the docudrama exposing the deadly ills of repetitive blows to the head in the NFL, it’s not didactic or even self-righteous as one might fear. It is smart, balanced and, despite a matter-of-fact approach, deeply human. It also brings a fresh and informative angle to the matter that seems to be getting more serious media attention as of late (excluding Commissioner Roger Goodell’s foot-in-mouth comments caught on tape). This story of how the downstream deteriorating physiological effects of head banging were discovered, and the NFL’s efforts to suppress those findings, is remarkable in its own right: Nestled deep inside all the corporate wrangling lies a compelling immigrant success story. 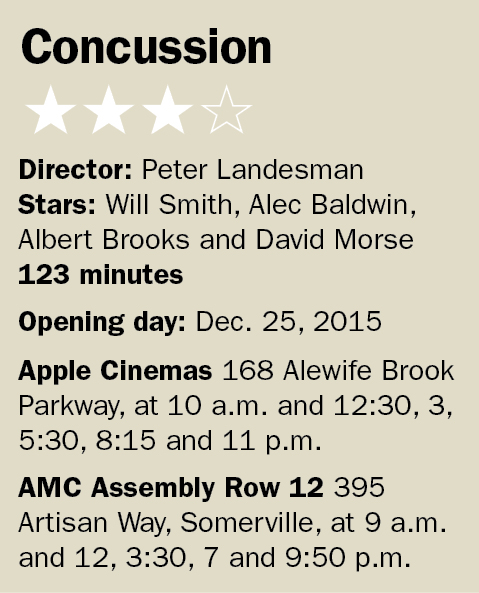 We begin shortly after the new millennium with “Iron” Mike Webster (David Morse, excellent as the tortured lineman), a four-time Super Bowl Champion now disfigured, hearing voices and practically homeless, living in his pickup truck. Even though he’s adored in Pittsburgh, no one seems to notice or care until he commits suicide and is rolled in on a gurney for an autopsy – that’s when everyone wants a say. The pathologist on duty, Dr. Bennet Omalu (Will Smith), happens to be from Nigeria, doesn’t have U.S. citizenship and by default is immune to the commercially fed love of America’s most-watched sport and the machinery surrounding it. Against minor protests around the morgue, Omalu gets down to his clinical task and initially finds Webster’s brain normal but keeps digging, spending several thousands of of his own dollars (for outside tests) to arrive at the Chronic Traumatic Encephalopathy diagnosis we’re all now too acutely aware of.

Getting to that aha moment isn’t so much the challenge – that comes early and easily. The hurdle becomes the process of having the discovery accepted by the medical community, where the burden of proof among skeptical academics is high, and many, as the movie lazily implies, might be in the pocket of the NFL or look unfavorably upon a “quack” from a country afar. It’s also during this period of professional turmoil that Omalu is introduced to a Nigerian woman through his church (Gugu Mbatha-Raw, so good in “Belle”) and a slow-budding yet palpable courtship ensues. The subplot of the foreigners’ pursuit of the American dream (and the horrors encountered along the way) anchors the film with heart while the nastiness of corporate spin, big money and public denial muzzle Omalu’s pursuit from validity and more importantly, informing the public of a serious health crisis.

Smith, who’s always been a capable performer, does a fantastic job with his accent and the quiet chemistry he forges with Mbatha-Raw. It’s his most emotionally mature performance since “The Pursuit of Happyness.” Albert Brook adds a warm comical layer as Omalu’s boss, who comes under FBI scrutiny for using his public office for personal gain – a stamp borrowed and a fax or two made. The implication is that Omalu and his supporters are up against a coverup, and the people behind it will to go to great extremes to keep things quiet, but with such half-reveals never revisited, the narrative becomes infuriatingly wishy-washy and flimsy. The director, Peter Landesman, making his second feature, seems to shy away when it’s time to roll up one’s sleeves and dig in. It’s a near-missed opportunity that the able cast keeps from listing with competent, nuanced performances that hold despite the rickety framework.

Beyond Omalu’s dogged determination, carried forward by a steady dose of avuncular encouragement from Brooks’ department head, the film’s most affecting nuggets come in the depiction of the painful effects of CTE long after the player has left the gridiron. There’s a terrifying scene in which former Steeler lineman Justin Strzelczyk (Matthew Willig), a mountain of a man who believes he’s suffering from bipolar disorder and depression, flies into a rage at his kids and diminutive wife – the grizzly in “The Revenant” would be no match. More telling is Dave Duerson (Adewale Akinnuoye-Agbaje), a Super Bowl warrior (he beat up on our Pats in 1986, and at the end of the film there’s a nod to old friend Junior Seau) turned member of the NFL brass who keeps Omalu and his findings at bay and even berates another player, broke and suffering from CTE, telling him to “get it together,” but later Duerson himself becomes afflicted – and the moment of realization and atonement goes right through the heart.

Ultimately there’s no real winners in “Concussion.” It’s a cautionary tale that should make those driving the NFL moneymaker take pause more than they already have. For the rest of the mortal universe, it strips the glitz from the game and humanizes the players and how much they have to contend with after the fanfare and the big fiscal scores are gone. It’s also likely to make parents second-guess pee-wee and high school football. No matter; fantasy football won’t ebb, nor will viewership, but how the safety of the game is perceived and the value of players off the field as men should. The film smartly underscores that point with quiet dignity and grace By looking through the eyes of a determined soul who could care less about who’s going to Disney World.