‘The Lady in the Van’: True tale is a bit twee, but has tinge of darkness (and odor as well) 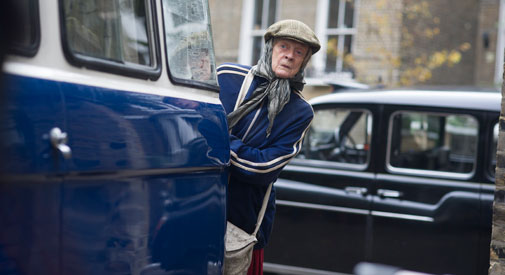 ‘The Lady in the Van’: True tale is a bit twee, but has tinge of darkness (and odor as well)

Nicholas Hytner’s “The Lady in the Van” strives to be a grand tale about opposites uniting and the human decency and compassion kindled from such unlikely unions, but director Hytner and writer Alan Bennettt, who lived the real-life tale, have loftier ideas that don’t necessarily gel. Sometimes simple things are best left to pat, straight-ahead storytelling, especially when you have the indomitable Maggie Smith in your stable to carry the load. 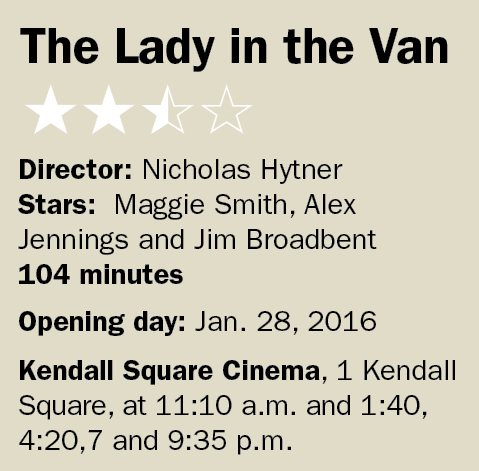 Bennett, a playwright who gained a 1995 Oscar nomination for the screen adaptation of his play “The Madness of King George,” here adapts his 1989 memoir about the cantankerous, troubled and uncleanly elder woman who parked an inoperable van in his driveway and stayed 15 years. “Shit Happens,” might make a better title for the film, as the vagrant squatter, Mary Shepherd (Smith), pretty much defecates anywhere and everywhere and tosses poo out on the driveway, leaving it for the patience-tried Bennett (played with somber grace by Alex Jennings, sporting an Elton John-eque coif) to mop up. Shepherd’s van is a veritable health hazard, her clothes are soiled and when she trudges in and uses Bennett’s loo, you feel there may be a need for a hazmat team.

Gump aside, the film rises to its modest station based on the embodiment of the roles by the two leads. The film begins ominously enough in the ’50s as Shepherd speeds along in the van fleeing from the cops. She gives them the shake, but the van has a huge bloodstain across the hood. Flash-forward to the early ’70s in Camden, London, where Shepherd becomes the scourge of the middle-class artistic community. She’s a bit bonkers and sharp of tongue, but she’s tolerated, just barely, until an ordinance says she has to go. That’s when Bennett, ostensibly wanting to do the right thing, steps in – and gets soiled discards and a steady stench for this troubles.

The why of such a union never really fully gets plumbed, and while there’s a degree of dissatisfaction there’s great relief too at the lack of over-the-top, maudlin, sentimental schmaltz. Smith, so wonderful in everything she does, most obviously “Downton Abbey,” goes to great degrees to keep Shepherd from being more than just a batty old bum with harpy outbreaks. She and Bennett the writer constantly hone the edge of her enigmatic past – the blood on the van, her cowering dislike of classical music, the ties to the church and a late-night visitor (Jim Broadbent) who shakes her down for cash – and it helps that Bennett the character is not the prying sort.

Where the film knocks its knees is in the conventions it employs. The coyness is forgivable and has its rewards, but the meta doubling of Bennett onscreen – the writer observing the character in the dramatic action and having a dynamic back and forth – is not only disorienting, it’s unsettling, and it pulls the viewer from the soulful heart of the pair’s relation. No to mention there’s an aloof, smug tweeness that wafts in an unfriendly manner throughout, continually and blessedly abated by Smith’s steadfastness and the moments Bennett puts himself on the line for Shepherd.

“Lady in the Van,” marks the third collaboration between Hytner and Bennett – Hytner directed “The Madness of King George” and 2006’s “The History Boys.” Their latest, while admirable and amiable, is their least. The actors power through, but the ungodly dwelling in matters of feces and an over-the-top use of FX at the end is far short of divine.