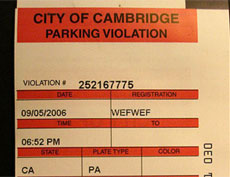 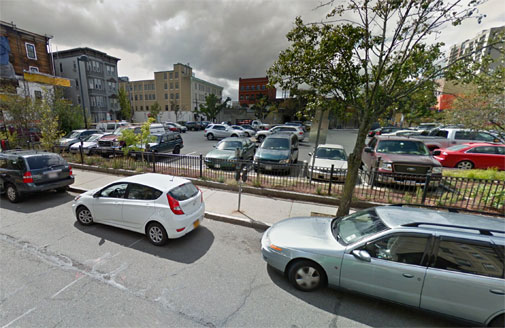 Municipal Lot 5 in Central Square is a hotbed of parking ticket activity, according to a report made from city data.(Photo: Google)

If it’s after 7 p.m. Tuesday and you’re parked in a metered spot in Municipal Lot 5 in Central Square, you probably already have a ticket. Statistically speaking, anyway.

RentHop, an apartment search website with three former Massachusetts Institute of Technology students among its key staff, has done a deep dive into Cambridge’s OpenData platform and come out with an fascinating, if not a little dispiriting, look at the city’s parking ticket situation last year.

“For a city of about 105,000 residents, Cambridge is a hotbed of parking ticket activity,” the report says, citing 300,000 tickets handed out in the past fiscal year – or about 30 tickets per day per worker in the Traffic, Parking & Transportation Department.

“The neighborhood of Mid-Cambridge amassed the most tickets during fiscal 2015, with 85,544 tickets. That’s just under seven tickets per resident,” said the RentHop team, which includes co-founder Lee Lin, a self-described “data geek from MIT”; director of product Luxiou Chen, who said that while studying computer science at the school he built a Lego robot that made “bespoke” peanut butter and jelly sandwiches; and mobile engineer Vladimir Fleurima, a maker of embedded devices and location-aware apps at the MIT Media Lab.

Joseph Barr, director of the city department, said the RentHop information looked “generally accurate, although there’s something off about their math in terms of the number of tickets issued per day.”

In its report, RentHop runs through a series of data categories, and there are interesting findings in each. Its interactive heat map of parking tickets notes that according to city data, the MIT/Area II neighborhood has the lowest percentage of households with a car – as an area hosting many students, the rate of 45.1 percent makes sense – but it’s a bit mind-blowing to hear that in Cambridge Highlands, 100 percent of households have at least one car.

Strawberry Hill had the lowest parking tickets per capita last year: 0.2, or only one ticket for every five residents, the company says.

As to that bit about already having a ticket, that’s because Municipal Lot 5 generated the most parking ticket revenue last year, and because Tuesday is the day that has generated the most tickets over the course of a year. (After Sunday, the next safest day is Saturday.)

In the RentHop report,

“Further data analysis shows clear trends in the distribution of tickets issued. Tickets tend to be issued during the early afternoon, with the most tickets being written between 8 and 9 a.m. and 1 to 3 p.m. There was a clear dip around noon every day, presumably for ticketing officers to refuel …

“As the main source of tickets in the city of Cambridge, parking meters should be paid close attention. You should be aware that tickets are issued not only for not making it back to your meter on time, but also for staying over the maximum allowed time, also known as ‘meter-feeding.’

“Most meters throughout the city become inactive at 8 p.m., but don’t think just because it’s 7:30 p.m. that you’re in the clear. A huge spike in parking activity was seen between 7 to 8 p.m., as enforcers make a final sweep for the night.”

The whole thing is worth a look for anyone who drives, even if it’s just the occasional rental or Zipcar.

There’s good news, though, from another source: Cambridge has the sixth-lowest number of traffic fatalities in the state, and the 20th-lowest in the country, according to ConsumerAffairs, a Nevada-based consumer news and advocacy organization. Somerville does even better in preventing traffic-related deaths: It’s second to last in the state in terms of traffic fatalities and fifth to last in the country – despite being among the most densely populated metro areas in the country. (Somerville has 18,667 people per square mile, according to the 2014 American Community Survey, and Cambridge has 16,548.)

Cambridge had 1.85 deaths per every 100,000 population and Somerville had only 1.25, according to the 2014 National Highway Traffic Safety Administration Fatality Analysis Reporting System. Quincy beat both with only 1.06 deaths.

The nationwide average was 21.13 deaths, and according to data from U.S. Department of Transportation and the National Highway Traffic Safety Administration, there were 32,675 people killed in motor vehicle crashes reported in 2014. A little less than one-third were alcohol-related, and 28 percent were caused by speeding, the data show. Ten percent of fatalities were caused by distracted driving.

This post was updated Feb. 12, 2016, after RentHop made contact to correct the rough number of tickets issued per day, per officer from its original report.