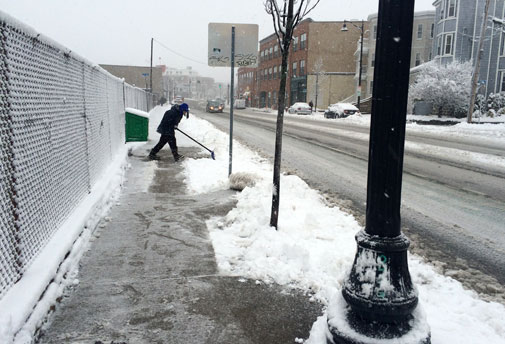 A worker clears snow on Somerville Avenue on Friday. More snow is on the way Monday. (Photo: Marc Levy)

A winter storm warning for is in effect for Cambridge and surrounding areas from 4 a.m. Monday to 7 a.m. Tuesday, as well as parts of Connecticut and Rhode Island, according to the National Weather Service, with expected snow accumulation of 4 to 8 inches locally.

As a result, the city has put a snow emergency parking ban into effect at 10 a.m. Monday, with parking prohibited – and towing commencing immediately – on streets with “No Parking during Snow Emergency” signs. The ban lasts until 6 p.m., according to an update on the Cambridge Snow Center Web page; updates are delivered to people signed up to get alerts via phones or social media. Facilities providing free parking are listed here.

Vehicles parked in school and city lots must be moved within two hours of the end of the snow emergency. Cars not moved from these lots by 9 p.m. [Monday] may be subject to ticketing and towing.

District offices were also to be closed in Somerville, and all afternoon and evening events scheduled for Monday were canceled. Cambridge public meetings, including the City Council meeting, and all evening programs, including all Department of Human Services programs, were canceled, the city said in an email shortly before 10 a.m., though trash and recycling pickup was to say on schedule.

Snowfall is expected to become heavy into the early afternoon, “with snow intensity diminishing by mid-afternoon,” the weather service said. Visibility could be a quarter-mile or less at times.

That will make travel “slow at best” on paved roads and “quite difficult on any unplowed or untreated surfaces,” the weather service warned.

This post was updated Feb. 8, 2016, with Cambridge event cancellations.