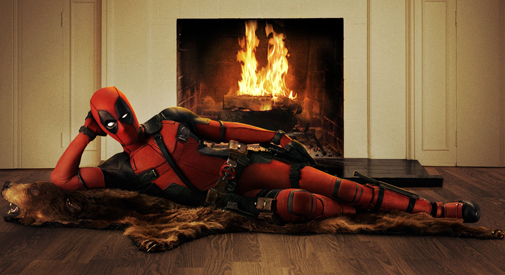 “Deadpool” sets its acerbic, deconstructive, fourth-wall-breaking tone right off the bat. The camera pulls out slowly on some contorted guy frozen in mid-tumble in the passenger seat of an SUV, a burn imprint on his head from the car’s cigarette lighter; there’s a random “People” magazine cover floating nearby featuring the “Sexiest Man Alive” (Ryan Reynolds, who plays the facially disfigured hero of the title); another baddie’s getting a wedgie from the merry red-suited hero; and a random wallet shows a flashcard from “Green Lantern,” (2011) Reynolds’ poorly received other superhero project – and during all this we get the canny credits that approximate “Starring some British actor as the villain,” “with a computer generated creature,” “Directed by a Hollywood Hack” and “Produced by Asshats.” 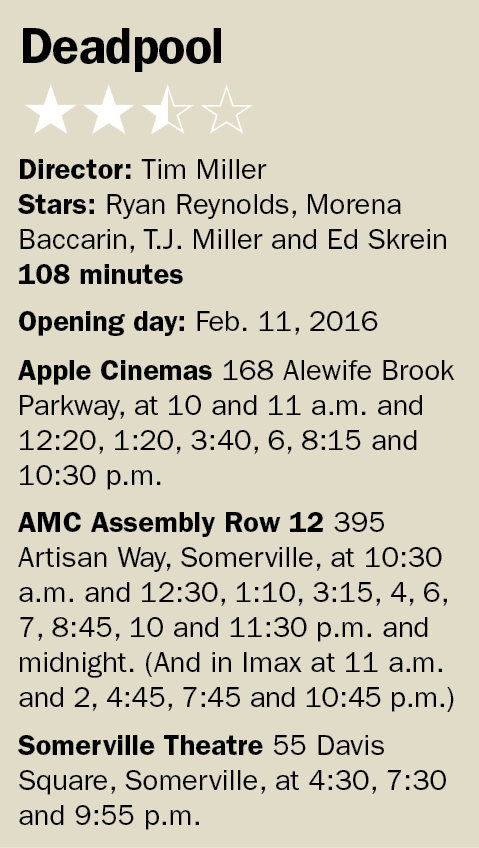 Somber and serious like “X-Men” this is not, and that’s where “Deadpool” draws its energy, with high quirk and black comedy as endless graphic dismemberings and gorings fill the screen. It’s what another Marvel offering, “Guardians of the Galaxy,” did so effortlessly throughout, but this is to such a gonzo degree that it has Deadpool in mid-sword fight talking casually to the audience to elaborate on his social views and past, even while taking a bullet or two for his trouble. But don’t worry; he regenerates like Wolverine, though not quite as fast. The wicked wit, so good and so rich early on, also happens to be the Achilles heel of “Deadpool,” as such a nosebleed level of hyperbole and genre-skewering becomes impossible to sustain.

In small slices we get Deadpool’s backstory: He’s a former Special Forces guy named Wade who becomes an enforcer for hire, doing your dirty deeds for the right price. He falls for a saucy goth pixie (the very lovely Morena Baccarin) who works at the local ruffian waterhole. One thing leads to another and through unhappy happenstance Wade becomes injected with a mutant serum – thus the Jabba the Hutt pizza face and ability to regenerate. Some of this, sans Wade and his gal’s very kinky sex life – replete with a strap-on scene to make you wince – runs fairly flat, though Reynolds, blessed with a snarky crack comic wit branded back in his “Van Wilder” days, holds the pedantic backstory aloft. The introduction of mutants from Dr. Xavier’s X-Men school, a titanium hulk called Colossus (voiced by Stefan Kapicic) and a punked-out adolescent by the monicker Negasonic Teenage Warhead (Brianna Hildebrand) elevates things. They’re looking to politely corral Deadpool into the ranks of the X-Men, but their do-good mantra doesn’t sit well with his mission to exact revenge against those who mutantized him.

Ultimately, and unfortunately despite all good intentions, “Deadpool” saddles up and rides the rote genre arc. The situational gags never let up, though; Deadpool’s skewing of Negasonic as an angry Sinead O’Connor, the “127 Hours” crack as he lops off a shackled hand and the ensuing masturbation jokes about the infant-sized regenerating appendage, plus his rooming with a blind black woman who likes to assemble Ikea furniture and harbors a hankering for blow, are riotously worthy and wicked, not to mention that the stunt choreography, set designs and FX integration are masterful and seamless. Like its hero, however, “Deadpool” the movie is something of a mutant hybrid: part high production, part sophomoric slapstick, part witty revisionist reengineering, but also totally boilerplate. It’s a tangy olio that lacks substance and consistency, and despite that, its in-your-face moxie comes at you in all the right ways, gripping you by the gunny sack with a big glorious joker smile and never letting go.