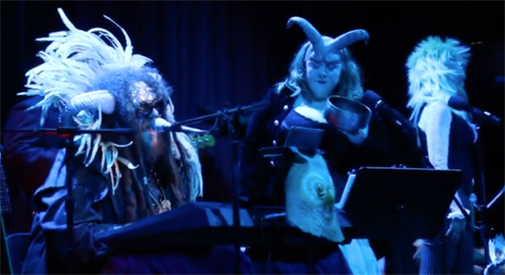 Timing, luck and boldness play role with The Army of Broken Toys
By Marc Levy

The David Bowie celebrations are not quite over (more than two dozen artists bring a Bowie songwriter tribute night to Harvard Square’s Passim on Feb. 22; and the nearby Beat Brasserie has an 8 p.m. Thursday event as well) but after the legendary rock star died Jan. 10 there was a rush of creative salutes – all of which sold out fast – including a Philip Glass symphony premiere at MIT, a special Heroes dance night at The Middle East and “As the World Falls Down” at Oberon.

The live take on the Bowie’s 1986 film “Labyrinth” seemed like savvy timing by musicians Walter Sickert & the Army of Broken Toys and burlesque troupe the Slaughterhouse Sweethearts – except that the Jan. 30 show had been in the works for a year.

It’s just one tidbit from an interview with band founder Walter Sickert conducted by Kristina Kehrer, of Cambridge Community Television’s Neighbor Media. The 25-minute segment that also captures some of the music and dance from “As the World Falls Down.”

In addition to an extensive talk about Bowie’s importance as a musician and muse, and how he used his final albums to say an elegant goodbye, Sickert talks about the origins, meaning and growth of his own dark performance art band, now in its eighth year. While the thematic and theatrical links to the cabaret stylings of the Dresden Dolls and Amanda Palmer have been pretty clear, Sickert’s most fascinating anecdote explains how the band wound up opening for Palmer on a 2008 international tour:

“‘Lucky’ was definitely part of it – lucky and not afraid to ask. That’s the best advice I can give anybody, any artist and any musician, is always ask, don’t be afraid to approach somebody. Even now I still have that hesitation, like ‘Oh, I don’t want to bother that person.’ But I saw Amanda at a party and approached her and said, ‘I know you’re going to Europe, and I was thinking I might follow you and open up for you. How does that sound?’ And she said, ‘If you get there, you can open up for us.’ And I said, ‘All right, I’ll get there’ and followed here over to Amsterdam and played a bunch of shows over there. And once we ended our stint with Amanda we went on our own little tour for a about a month and a half.”

Her answer may be less surprising when taking into account that Palmer is the author of “The Art of Asking: or How I Learned to Stop Worrying and Let People Help,” a 2014 nonfiction book written after what’s still considered the most successful Kickstarter music campaign to date.

Walter Sickert & the Army of Broken Toys’ third studio album, “Come Black Magic” is due in March on vinyl and CD after its own successful Kickstarter campaign. The first single, “Where’s Your Ghost,” is here with a link to downloadable audio: