Aiming for a positive tone on student tests, teacher meeting still finds much to criticize 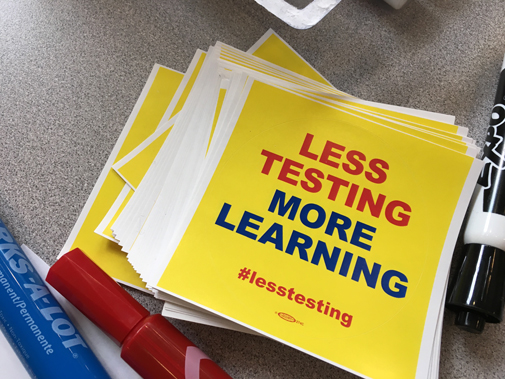 Aiming for a positive tone on student tests, teacher meeting still finds much to criticize

More than 100 Cambridge educators – general and special education teachers, interventionists and coaches – representing almost every school in the district turned out for sharp talk about testing. Though educators had many concerns and complaints, the aim was to identify how to make district assessments “work.”

Similar to the parents’ assessment meeting a week earlier, the Cambridge Educators Assessment Forum revolved around two sessions of small discussion groups where “scribes” took notes and reported out observations at the end. Anyone watching would have been reminded that the educators were playing to their strengths here: projecting clearly without microphones; moving without instruction through “chalk talks” where they wrote comments on poster boards and quickly breaking into “choice time” for small group discussions; collecting observations from groups of folks onto poster boards; and snapping their fingers when they agreed with a speaker.

This forum had an advantage over the parent forum: Running their own event, educators could handle the higher-than-expected turnout by adding scribes and tables so every participant could take a seat at a table for eight, unlike the parent forum where sometimes 20 people crowded around a table. Also unlike last week’s meeting, when teachers were asked by administration to listen and not comment, parents were welcomed and urged to “jump in” – to enthusiastic applause. 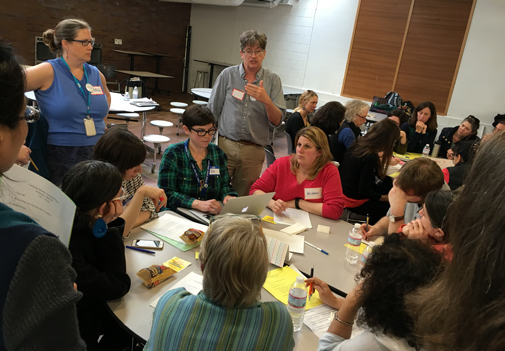 The meeting was able to handle higher-than-expected turnout and keep the number of participants per table low.

The organization of the Cambridge Education Association meeting was spearheaded by the newly formed advocacy group Less Testing, More Learning. Graham & Parks School teacher Karen Engels – also a Cambridge mother of three – kicked off the meeting by presenting a working draft of “core values” to launch the dozen or so tables on editing the statement.

“At first glance, there appears to be a lot of controversy about assessment,” said Engels in opening comments. “But if we really listen to each other, I think we will find a lot of agreement: a fierce commitment to all children’s success. We share many common beliefs about assessment that can be summed up quite simply: We know that educators need to be continually observing, probing, investigating and analyzing students’ thinking in order to teach effectively.”

Saying they wanted to “set a positive tone,” Engels stressed in the draft the ways they want assessments to “work,” including getting useful information about student progress to educators and families and supporting good teaching and classroom environments. The working groups soon added more language. A very popular comment, according to the finger-snapping and applause, asked about stress from more testing, particularly among the youngest children.

One English teacher showed her professional roots with attention to language: “‘Instruction’ literally means ‘to pile on,’ according to the Latin root,” she said. “’Teaching’ is ‘to draw out.’ We need to be a place where we are ‘teaching’ and not ‘instructing,’” she said to applause.

Some themes arose across these discussion groups:

Closing the gap “must be our primary commitment. It is one the main reasons we choose to teach in such a diverse district,” one educator said to strong applause. “Many of us worry that one critique of teachers worried about assessments is that we do not care about the achievement gap, that we want everyone to be like middle-class white kids. I don’t see that in any of the teachers. Most of us are working the hardest to bring up [performance levels for] kids who need the most help. We think the opposite is happening now.”

Blame went in to tests’ fast pacing, language-based math assessments, the use of “convoluted language” and “bizarre formats,” inappropriate vocabulary – especially for students for whom English is a second language – and less time working with students and building classroom community.

“When pacing and assessments drive other things out of curriculum,” one said, “you are really making a huge opportunity gap and shutting out the kids who can least afford it from the chance to do some really important work.”

Though occasional gains in disadvantaged subgroups for some grades show small improvements on state standardized tests, they said that in the classroom many kids are labeling themselves as poor students early. “A lot of students are defeated by third grade,” one group reported. “They have made a lot of progress – I can show it to them,” one teacher said. “They can work hard, but when the assessment comes back and they see they have scored 30 percent, they don’t believe me anymore.”

Feedback is poor. Current tests aren’t giving enough timely feedback on how to immediately change teaching to help struggling students, though it’s something teachers said they most want. In a significant departure from Assistant Superintendent Jessica Huizenga’s presentation at the parents’ forum, educators said many “formative” assessments are misnamed, with feedback coming too late and in too cumbersome a form to be helpful, often as “mountains of data,” one teacher said. Even if they can get useful feedback, many said the dilemma was to either move on without fixing problems or fix them but fall hopelessly behind on the next unit assessment.

There’s little alignment with curriculum. Despite administration assurances, teachers said many district assessments were not aligned with curriculum, and too many students were being testing on things they had not learned yet. An upper school teacher passed on an anecdote about the thrill of finding a source for a curriculum unit that was “the first time when the teaching, curriculum and assessment were aligned” – but the teacher found the source online, on her own. 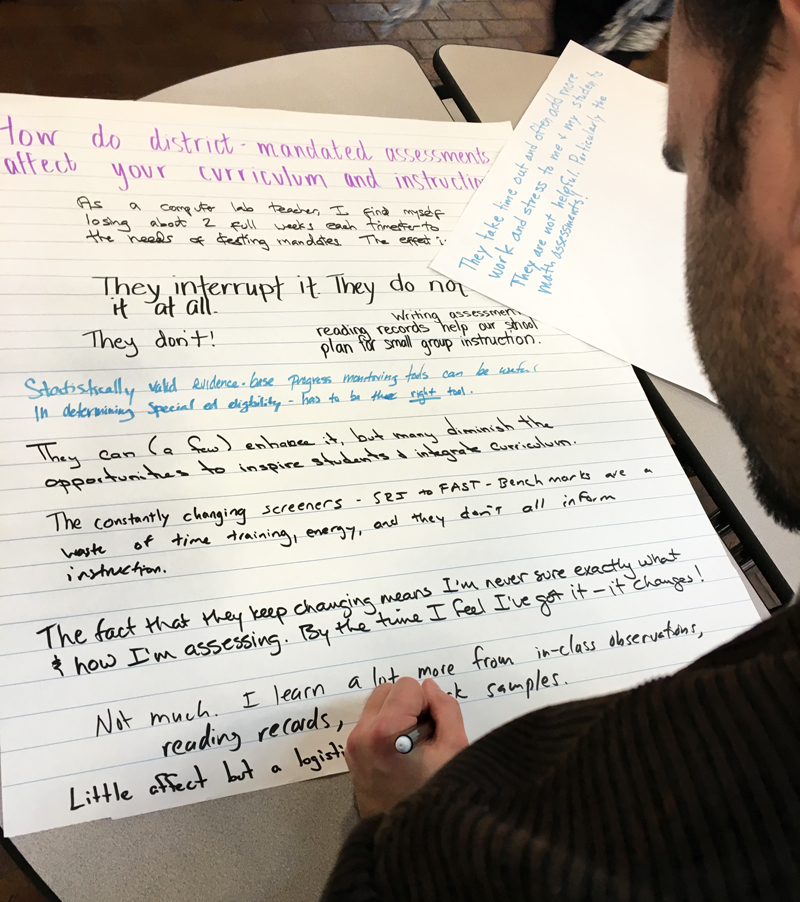 Educators were invited to leave comments on poster boards for the meeting’s “chalk talk” portion.

The benefits of computer testing are questionable. While many parents worried about the impact of rushing children into more technology, there was considerable complaint from educators that the results of computer-based testing were not helpful – a bubble on a multiple-choice exam doesn’t say anything about why students make mistakes. Math teachers need to see student work, they said, even if they get the right answer. (“It could be for the wrong reasons,” said one upper school teacher.) An English teacher noted that “fluency” assessments stress the ability to read quickly with zero attention to understanding. Teachers also observed that, especially in very young children, there is often a “disconnect” with the content on a computer screen. One said, “when a hard question is sitting on the screen, they can click a button and make that question go away,” and at least two cited a finding that students who took the new PARCC exam last year on computer scored significantly below those taking it with pencil and paper.

Math teachers seemed universally unhappy with a computer program that gives children progressively harder problems until they fail enough for the program to stop. “It is asking them to do things I haven’t taught them yet. It makes them worried and perplexed,” one said. “I end up being glib about my asking them to do fifth-grade math in third grade.” Most if not all felt it was destructive to children’s self-confidence.

Students are stressed. Teachers overwhelmingly reported obvious child anxiety and stress surrounding the assessments in young children. While one upper school teacher said that by the time they reach her classroom, students take assessments in stride “because they are so used to them,” some students in younger grades get physically ill, teachers reported, and are able to articulate at a very young age that the tests make them nervous and undermine their confidence. (The rules of the PARCC test, one teacher said, is that “if a child throws up on a test,” the paper goes into a special plastic bag and the answers need to be transferred and sent onward, along with the bag.) Third-grade teachers were amazed students arrive already “freaked out” by state-mandated tests they haven’t taken, because they start that year.

There was overwhelming concern about the signals the emphasis on assessments send. “We are sending the message that the goal of learning is answering the test instead of asking a question,” one said. A teacher of English as a second language, who said she is “constantly” pulled out of her work to administer assessments, was asked one morning by a student, “Ms. X, what are you going to do to us today?”

There are too many assessments. Even if all the assessments were useful, many argued that the quantity takes time away from teaching and are “interruptive” to engagement and momentum.

This was particularly poignant for teachers in the early grades. Many upper school and high school educators were disturbed to learn that assessments start in the first week of kindergarten. Noting the relationship to increased behavioral issues across all grades, a kindergarten teacher said the assessments rob time from other important skills.

“[Kindergartners] are losing out on choice, dramatic play, free play. Learning about taking turns and what to do if two kids want to play with the same thing. They are not getting their ‘social language’ instruction. It’s not like they were just playing in kindergarten until we decided to teach them to read,” the teacher said.

The culture is anti-collaborative. Many educators bemoaned the lack of time to work together with colleagues. One teacher wrote, “at our school we are not allowed to collaborate about anything unsupervised by a coach, an administrator or a consultant.” (The time spent with paid consultants going over data that are “useless” to them and “tells me about students that I know well” was raised a few times.) The forum itself was an example: Middle-school teachers were obviously surprised to learn about curriculum and assessment changes in elementary classrooms; elementary teachers peppered upper school and high school staff about the math curriculum, many for the first time getting details about the “advanced math pathway” tracks starting in seventh grade. One participant commented afterward that she was impressed it was not “another of those meetings we hear the same voices talking to us.”

As most in the room left to go home, a core group of a dozen or so organizers gathered the “chalk talk” poster sheets, individual comment sheets and “scribe” notes and gathered at a back table to discuss next steps.

This story was updated to correct the focus of a quoted teacher to identify that she is teacher of English as a second language.