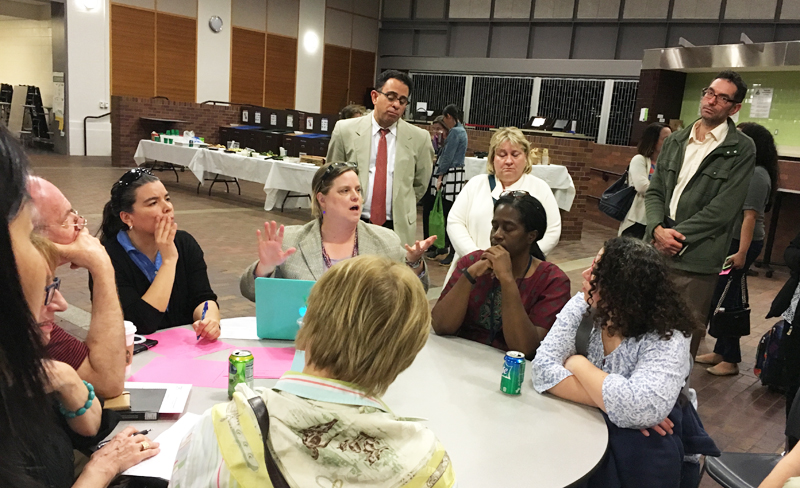 There was palpable tension Tuesday at what is now being billed as the first of a “series of community conversations” about testing in Cambridge schools. The meeting drew parents who came armed with concerns, questions and observations about the impact of the assessments on their children. But the elephant in the room for many was the absence of educators in the discussion – at the request of the school administration.

The format of the evening revolved around two 25-minute “world café” sessions – small discussion groups where parents heard or read a list of the districtwide assessments for a particular curriculum, then were given the opportunity to ask questions or make observations. The tables, grouped by grades and subjects, were run by department staff, most of whom did not introduce themselves. These staff tried to help parents understand the role and frequency of the various assessments and played the role of “scribes,” noting parent comments and often pointing out that they were there to take notes rather than answer questions.

Some parents were surprised educators weren’t part of the long-awaited discussion; others had caught wind of the exclusion from their children’s teachers.

Several teachers were in fact in the room, but did not participate in discussions – some saying publicly (and many privately) that they had been “asked not to participate but to be there to listen.” In fact, at one table, a listening school principal suggested that perhaps they could “break protocol” and ask a teacher to comment, but the “scribe” resisted because it would be inconsistent with how she had run the previous group.

Evolution of a “community discussion”

The event was described originally in a May 19 motion by the School Committee as a “forum that allows all stakeholders – families, students, teachers and elected officials” to discuss testing, and was itself a response to the Cambridge Educators Association union urging a reexamination of assessments and “new initiatives.” That motion came as the committee joined the Association’s earlier call not to implement the new Partnership for Assessment of Readiness for College and Careers standardized tests in the spring and instead stay with the long-used Massachusetts Comprehensive Assessment System.

Several months later, with that community discussion yet to happen and on the heels of a surprise 4-3 vote to switch to PARCC this spring, the committee passed another motion calling for “a world café style forum” with a follow-up session in May.

The motion omitted language about who would be involved. Asked about it at the time by member Patty Nolan, motion co-maker (with Fred Fantini) Kathleen Kelly answered “that the target audience would be aimed towards attendance by teachers, parents and other community members,” according to committee minutes.

That plan was changed by administration, according to union president Terry Gist and Kelly.  In an email, Gist characterized Tuesday’s meeting as a “part of the series of three meetings that the School Committee originally agreed to co-sponsor with the CEA,” but said that after the first planning meeting with Kelly and Fantini, “Kelly told us that the district decided they did not want the CEA involved and set their own agenda without our input … Teachers are invited to [the Tuesday meeting] but can’t speak.” Gist said that several educators had met with Kelly and Fantini on March 2 to begin planning Tuesday’s meeting before they got word of the change.

Kelly acknowledged in a follow-up email that “I believe I stated [to the CEA] that the district leadership was not interested in joining with the CEA for the first conversation. The School Committee will be the consistent presence at each of these events.” Kelly would not name individuals in the administration responsible for the change.

“There’s nothing in the motion that requires that the teachers be a part of this first assessment conversation,” Kelly wrote. “I always believed that to get a fuller picture of the parent, student and teacher thoughts on assessment, the School Committee would need to host or co-host a series of conversations. Tonight, we will be starting with families and parents. Next week, we will be gathering feedback from the teachers” at a Wednesday forum.

In opening comments, Fantini characterized the goal of the meetings as providing useful information on the issue for superintendent Kenneth Salim, who arrives this summer to take over from the departing Jeffrey Young, as well as to have a “real conversation” on assessments.

“A waste of time”

The absence of teacher input was a common theme at the tables. It came up in each of the summaries provided by table “scribes,” described by one as a “huge” request, and got significant applause from the audience when mentioned. Several parents in groups expressed frustration that without teachers in the discussions, it was hard to understand the true impact of assessments in the classroom. One parent described it as knowing the difference between the “quantitative impact” of assessment – the number and frequency of tests – and the “qualitative impact” of assessments on the classroom, which she wanted to hear from the teachers.

“Why did you split us from the teachers?” another parent asked. “This is a waste of time.” A few parents were visibly angry at what one called “the muzzling” of the teachers. Some pointed out that finding time for meetings is difficult for family members, and they were irritated with the implication that they would have to come to more than one meeting to hear teacher feedback.

Others, though, said they were just glad to be able to see a list of assessments – or, for one, to have someone define “jargon” she heard but did not understand – and noted that their concerns and observations were being collected in writing for “review” by the committee and administration. 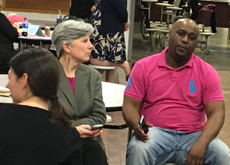 With teachers present but standing around the edges, the event had more of a participant/observer mood than recent similar events. There were more than 80 people in the room at times, but it was difficult to tell how many were staff. Adding to the tense dynamic, several parents pointed out, was the “milling about” of committee members and school department personnel who rarely joined the breakout groups, but instead stood around, often talking to each other.

Committee members Nolan and Richard Harding were present, along with Kelly and Fantini. Young emceed the event and Assistant Superintendent for Curriculum, Instruction and Assessment Jessica Huizenga made a brief presentation; they were joined by Deputy Superintendent Carolyn Turk, three school principals, and chief of staff Lori Likis.

Likis, Huizenga and the principals did listen in on some group discussions. State Rep. Marjorie Decker, who is also a parent, was present, as was state Sen. Pat Jehlen, who like Decker has taken a stand against what they see as burdensome assessments.

The breakout groups were preceded by Huizenga’s presentation on the role of assessment. After differentiating between assessments determined by the state and the district, individual school and teachers, Huizenga stressed that “formative assessments” – those whose results can help inform teachers what their next steps should be – is “shown by research” to be key to closing the achievement gap. She offered a few graphs of recent MCAS results showing improvement in some cohorts, and later gave two case studies of individual students whose performance improved. “Amazing things are happening,” she said, “because our teachers are using data” to improve their work.

Some parents referred to Huizenga’s presentation with concern during the breakout groups. “How do we know,” asked one parent, “that the assessments caused the improvements?”

“All this data show,” said another, “is that some kids are doing better at this very prescribed test.” When a “scribe” began the summary of her evening’s work with “the question is, are they getting better at math or at taking the test?” she was greeted with wide applause.

Unintended consequences of the assessments was another major theme. Several parents reported students feeling pressured, including having physical ailments such as headaches, and losing their “love of math” or confidence in their abilities. “My third-grade daughter says that she loved second grade. ‘I was good at math then,’ she says,” one parent bemoaned.

Parents were also concerned about the stress on teachers, many observing that they saw the pressure of having to give assessments, analyze data and deal with competing in-class and out-of-class demands. The kindergarten-through-eighth-grade science “scribe” reported that some parents who have older and younger children going through the school system observed that with increased assessments, there is “reduced time on deeper investigations in the curriculum.”

Another comment reported out in the summary was from a parent who said assessment had helped her daughter by making her “more responsible about her learning.” The group leader said this led to a conversation about the notion that “if the teachers have time for feedback” the assessments can take on more value.

The report on social studies was strikingly positive. Parents were impressed with “project-based approaches in assessments” that they found were more meaningful. They were pleased that often their kids “didn’t know that the assessments were assessments.” After the meeting, a teacher noted ruefully that she chalked that up to being “the one area” that isn’t part of standardized testing and has not yet been “redone” by administration.

She also said, however, that she was feeling hopeful the meeting was “the beginning of a conversation in which the School Committee and the administration will actually listen to what the teachers have to say” on this issue.

The educators plan their forum for Wednesday from 3:30 p.m. to 5:30 p.m. Key in planning is the newly formed group of educators called Less Testing More Learning, whose mission and vision statement have been endorsed by CEA leadership. The public is invited to attend.

Kelly closed the meeting by saying that there will be at least one more meeting this spring, “one where we would like to bring the teachers and parents together.”