‘Midnight Special’: With sky about to fall, curious trio is on the run from everyone 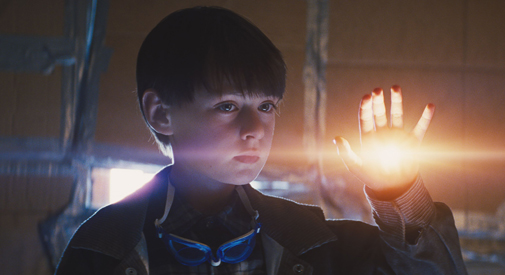 ‘Midnight Special’: With sky about to fall, curious trio is on the run from everyone

Jeff Nichols, the budding auteur from Arkansas who demonstrated a profound affinity for character development and edgy ambiance with “Take Shelter” and “Mud,” gets a tad heavy-footed in his latest, a further contemplation on the Rapture, sanity and the supernatural. Like his prior efforts, Nichols employs a fly-on-the-wall POV that offers intimate access. In “Shelter” and “Mud,” that technique allowed the viewer inside the complex souls of characters amid struggle, externally and internally. The conflict in “Midnight Special,” however, is nearly all external, a plot-driven vehicle that in lesser hands might arguably be no more than a flat directorial stiff-arm. 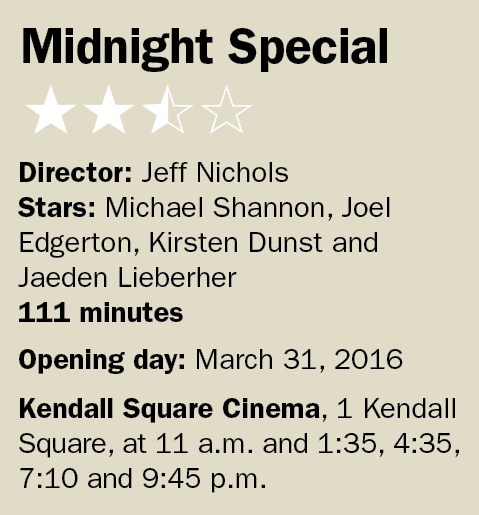 In scope, “Midnight Special” is an ambitious reach Nichols comes close to making good on. We begin in a boarded-up hotel room with two armed men and a boy, who sits under a blanket reading a comic book with a flashlight. The men are edgy. This is clearly some sort of last-stand event – or is it? Without resistance they make it to a classic muscle car (a ’72 Chevelle) in the lot and take off under cover of night, and the driver dons night-vision goggles and drives without headlights. These men know what they are doing and are on a bigger mission to do something grand and genuine, like save mankind, though the rest of the world hasn’t gotten the memo yet as to their higher calling.

In small, teasing strokes, including news clips and an immersion into a doomsday cult where the garb is best described as puritanical ’70s, we get the bigger picture: Roy Tomlin (played by Nichols’ onscreen alter-ego, Michael Shannon) and his able driver, Lucas (Joel Edgerton), have abducted an 8-year-old boy named Alton (Jaeden Lieberher, who starred opposite Bill Murray in “St. Vincent”) from said cult. The authorities are after the three. The cult, led by the venerable Sam Shepard sporting a too small-sport coat and a bad Flowbee cut, has dispatched a goon squad as well. Alton happens to be Roy’s biological progeny, but Shepard’s cult leader is the boy’s legal guardian. Their differences aren’t so much about the child’s theological upbringing so much as that the kid has a direct line into all the National Security satellites circling the earth. As a result, the Feds (led by Adam Driver’s nerdy greenhorn) want him too. Then there’s the matter of the halogen-bright beams that shoot out of the boy’s eyes at night. Alton’s clearly a gifted kid, but is he even human?

Nichols, who explored a boy’s life wrapped up inside an edgy crime mystery in “Mud,” has, in a sense, returned home to “Take Shelter” territory. The sky literally does fall as a meteor shower of hot metal, seemingly rained down by the 8-year-old Alton, conveniently blows up a gas station. Paranoia, apocalyptic prospect and shifting realities ensue.

The film becomes a ripple effect of perspective, but the wider Nichols pulls back the more he sacrifices his usual sure command over his audience. There comes a moment late in the film that feels like an unearned change-up; special FX get employed liberally as we round the pond and enter the extraterrestrial realms of Spielberg and Carpenter.

The strength of “Special,” just as with all of Nichols’ works, lies in its enigmatic titillation, the slow simmer of small truths that build. But we never quite get those truths. Just what drives Lucas to be so allied with Roy when he was never in the cult? How did Roy’s ex, played by Kristen Dunst replete with a “Big Love” ponytail, extricate herself from the group, and why did they split as a couple? These questions, and the matter of the miraculous making of the child, fall to the side but remain burning, even more so than Alton’s eyes as helicopters and military troops close in on the boy and his handlers.

The one sure thing Nichols has to bank on is Shannon’s burning intensity. The determination etched on the actor’s steely face, so perfect as a villain in “Man of Steel” and “99 Homes,” never wanes, and the quiet bond his Roy forms with Edgerton’s Lucas becomes invaluable. Like Jean-Marc Vallée, Nichols is something of an actor’s director, interested in character and motivation. He gets a bit far from that in “Special,” though the film is likely to be heralded for moving its genre underpinnings in new directions. Nichols’ next film, “Loving,” also starring Shannon and Edgerton, tell the story of an interracial couple sentenced to jail in 1958 Virginia for bridging the racial divide. That’s the kind of drama driven by outside pressure that’s certain to take viewers to other worlds.