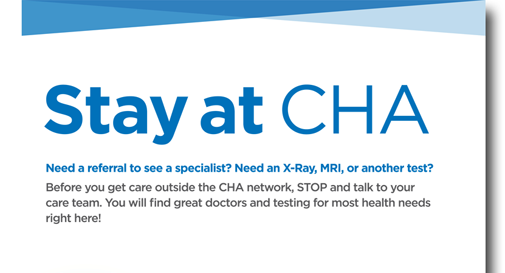 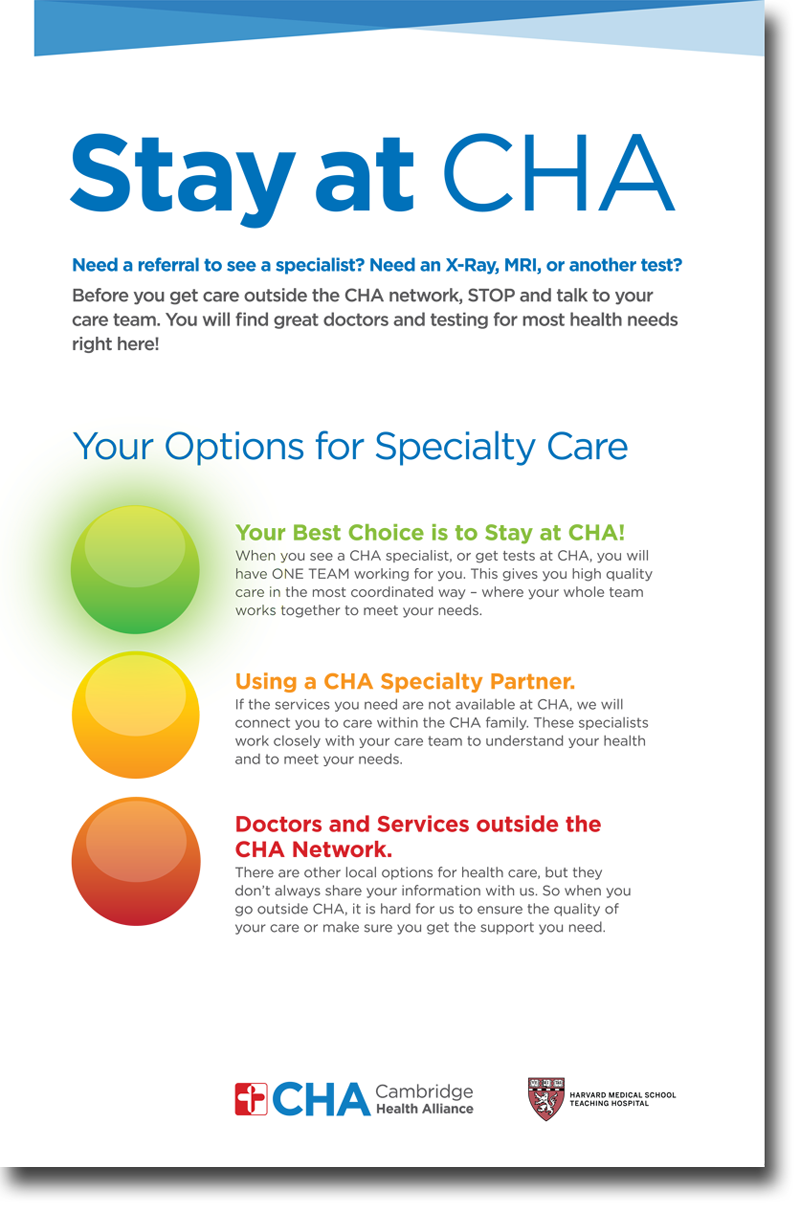 A Cambridge Health Alliance explains the system’s campaign to keep patients from going elsewhere for treatment.

The news came during a discussion at the March 22 meeting of the trustees’ finance committee about continued decline in the number of patients admitted to the Alliance’s three hospitals: Cambridge Hospital, Somerville Hospital and Whidden Memorial Hospital in Everett. The unexpected size of the reduction is a major reason the Alliance expects to lose $13.1 million this fiscal year instead of the $4.2 million loss originally forecast.

Money isn’t the only reason for trying to keep patients within the network. Having patients see a network specialist and use a network hospital helps doctors coordinate their care and see complete medical records, system officials say. That should improve patients’ treatment and avoid mistakes and gaps in care.

The move by doctors and hospitals to curb what they call “outmigration” or “leakage” is occurring throughout the industry as more physicians and hospitals become “accountable care organizations,”often merging several organizations into one large network. The organizations, promoted by the Affordable Care Act, are groups of providers that are responsible for all of their patients’ medical care, from a simple vaccination to complex open-heart surgery. Patients may know little or nothing about being in one; only Medicare requires ACOs to notify patients.

The organizations are supposed to reduce medical costs and improve care by coordinating and managing care – without sacrificing quality – while contracting with their own doctors and hospitals to control expenses. Insurers, including Medicare and MassHealth, may pay the organizations on the basis of how much money they save, or give them a set payment for each patient from which the organization must pay for all the care the patient needs. The Alliance has its own ACO and its doctors are also members of the Beth Israel Deaconess Care Organization; the Alliance is affiliated with Beth Israel.

The Alliance is coping with substantial leakage. The latest figures show that patients with primary care doctors in the system incurred 70 percent of expenses for their hospital care outside the network, Lisa Trumble, vice president of accountable care and strategic financial planning, told trustees at the finance committee meeting.

Outmigration is a problem for the organizations everywhere; a study of more than 545,000 of their patients on Medicare showed that about 62 percent of outpatient costs came from outside their systems in 2010-11. Many Medicare members can see any physician and use any hospital that accepts compensation from the program, making it difficult to control their choices.

“Every organization is getting tighter at keeping patients” within a network, Trumble said. “We have to get better at this.”

Learning to say no

Primary care doctors must learn how to say no, Chief of Medicine Dr. Assaad Sayah told trustees. “The primary care doctor has to be the person who says, ‘I’m sorry, I’m not going to approve you to go down the street,’” Sayah said, referring to a hypothetical request from a patient who lives near Melrose-Wakefield Hospital and wants to get treated there instead of traveling farther to go to the Alliance’s Whidden Memorial. “This is a very difficult conversation,” he said. “The system is built on choice.”

Asked whether Alliance managers monitor primary care doctors’ referrals, spokesman David Cecere said the system does “track referrals out of our system and share that data with our providers” for patients in health insurance plans that pay the Alliance ACO on the basis of performance.

“We are working to make sure our patients know about the quality and range of services available to them within CHA as well as the benefits of receiving care within a network connected by a shared electronic medical record,” Cecere said in an email. Posters in Alliance doctors’ offices make the same points in urging patients to choose care within the system.

Persuasion is necessary. Only half of Alliance patients need a referral from their primary care doctor to get other care, Cecere said.

Insurers play a part in controlling referrals, but not for many patients with MassHealth and Medicare, who make up a large part of CHA’s population. Also, patients with commercial insurance may have a type of plan that allows members to get care outside the insurer’s network for a higher price.

What if a patient disagrees with a decision on referrals or another medical issue? Patients can now appeal actions by private insurers, Medicare and MassHealth, but there is no procedure for appealing an ACO decision.

That will change. The state Health Policy Commission, established in 2012 to improve health care, will ask the organizations at the end of this month to establish internal appeals procedures and report the results – including consumer complaints – to the Office of Patient Protection, which now oversees appeals of decisions by insurers, commission spokesman Matthew Kitsos said. The appeals agency will use the reported information to write rules next year establishing an external appeals process allowing patients to seek redress at the Office of Patient Protection level, Kitsos said; members of private insurance plans already have the right to appeal company decisions there.

“The type of issues consumers may appeal through this process could include denials of referrals to providers” outside an ACO, Kitsos said in an email.