Man was dragged down Pearl Street by car after arguing in Central Square, police say 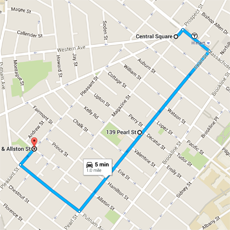 Man was dragged down Pearl Street by car after arguing in Central Square, police say

What seemed at first like an early Wednesday hit-and-run was actually far more: the dragging of a man behind a car after a fight near Central Square.

Police arrested Joekeem Nelson, 20, of 10 May St. in the Strawberry Hill neighborhood near Fresh Pond, as the suspect in charges that include armed assault to murder, assault and battery with a dangerous weapon and possession of a firearm without a firearms identification card.

They believe Nelson was involved in an early morning fight on Franklin Street near Central Square with the victim in the dragging. When a third man tried to get between Nelson and the victim, it’s believed Nelson pistol-whipped him, said Jeremy Warnick, director of communications and media relations for Cambridge police.

Nelson got in a dark Dodge Charger and grabbed and dragged the victim for an unknown distance as he drove down Pearl Street “at a high rate of speed,” Warnick said. The victim who had been pistol-whipped chased the car on foot. When officers responded at 8:12 a.m., they went to 139 Pearl St., slightly more than six blocks south of Central Square, finding the victims. Both were treated for non-life-threatening injuries at a hospital.

At some point after ejecting the dragging victim, Nelson turned right and, around Allston and Pleasant streets, threw away his firearm, police said. Officers later found the weapon.

Nelson was also named as a suspect in an armed robbery on Beacon Street in Somerville last year.