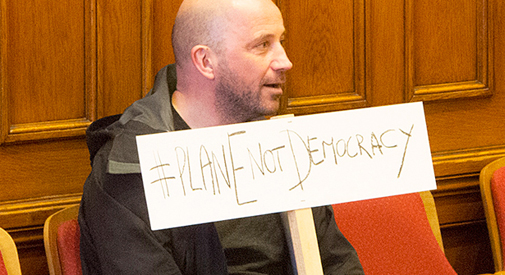 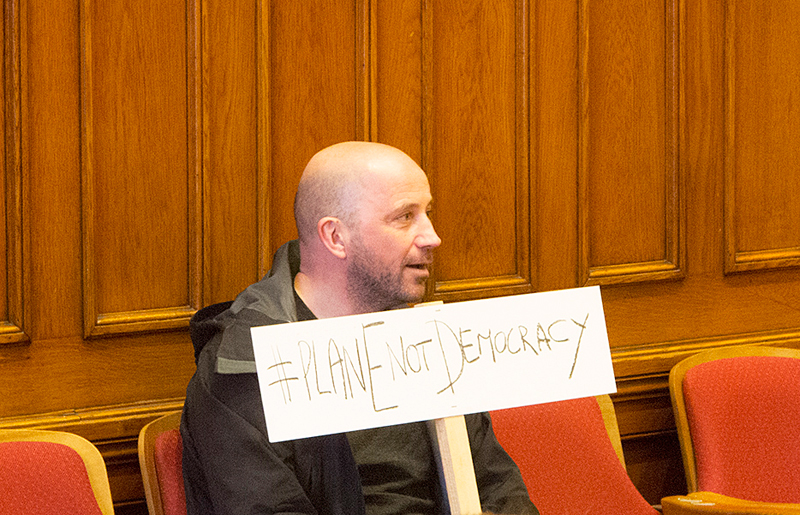 East Cambridge resident Ilan Levy sits with a protest sign at the back of City Hall’s Sullivan Chamber at a March 11 meeting. Levy was removed from the room because the City Council has a rule prohibiting signs. (Photo: John Hawkinson)

City Council meetings increasingly have limits on the way the public can express itself, and some may be unconstitutional. In several recent instances, the council has strictly enforced rules in ways that prevent or restrict speech at its meetings – meetings that courts have found to be public forums where any regulation on speech must be “reasonable and not an effort to suppress expression merely because public officials oppose the speaker’s view.”

The council last month ejected one citizen for carrying a sign, and this week stopped another from speaking a councillor’s name. It has tightened restrictions on public comment in its rules. Last term it stopped a meeting in the middle of a speaker’s time in response to his comments.

Ilan Levy, who ran for a council seat last November on a platform protesting Cambridge’s city manager form of government, called “Plan E,” was escorted out of the March 11 council committee meeting where City Manager Richard C. Rossi announced his retirement. Levy was sitting quietly in the last row and holding a sign that said “#PLAN E NOT DEMOCRACY,” but the council has a rule against signs.

Levy was removed from the room by Sandra Albano, the council’s executive assistant, just before the meeting began. He was allowed to return after leaving his sign outside the meeting room. 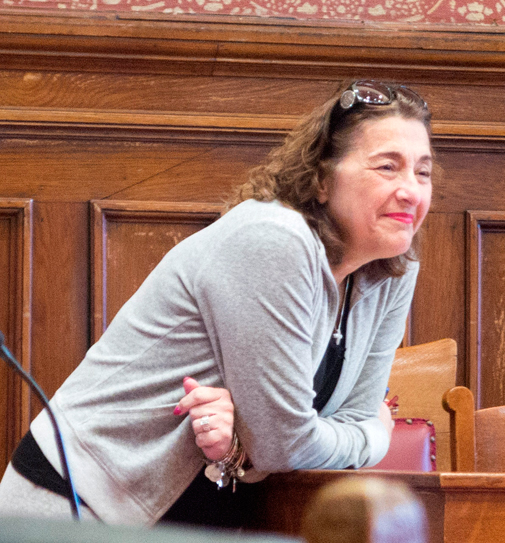 Removing Levy was against the law, said Harvey Silverglate, a nationally renowned first amendment lawyer and Cambridge resident. “Carrying a sign surely is less disruptive than, for example, shouting,” Silverglate said. “Escorting the sign-bearer out of the meeting violated, it seems to me, the sign-bearer’s rights, not to mention the right of those in attendance to receive the sign-bearer’s message.”

Levy said the meeting about city manager selection was “a particularly important moment” for his message about objecting to Plan E. “It was an opportunity for the City Council to step up,” he said.

The Supreme Court has found that municipalities can enforce regulations on forms of expression only when they “are narrowly tailored to serve a significant government interest, and leave open ample alternative channels of communication,” as Justice Byron White wrote in a 1983 case, Perry Education Association v. Perry Local Educators’ Association.

Levy said that before she removed him, Albano had been conferring with councillor David Maher, who was running the meeting, and that Maher had pointed to him.

Maher denied asking for Levy’s removal. “I was aware,” he said, “I was not involved.”

Council Rule 38.4 says “Poster or placards must remain outside.” But that rule does not appear to comply with the Supreme Court’s requirement for narrow tailoring.

It is also not a new rule: it was adopted in 1976, and has not changed other than to acquire a typo, with “posters” becoming “poster.”

Under Mayor E. Denise Simmons, the council has also begun to limit oral speech more sharply, not only by its form, but also by its content. At the Monday council meeting, Simmons began the public comment period by announcing: “Please refrain from personalities, please refrain from mentioning councillors specifically. … There’ll be no negative comments. I would really ask you not to, or the council under the orders of the chair will have to ask you to leave.”

This is a marked change from prior years, where the council has limited public comment to items on its agenda, but has not required that all speech be positive or neutral, nor has it prohibited the mention of individual councillors.

At Monday’s meeting, local activist James Williamson ran up against Simmons’ enforcement. Williamson tried to speak to a letter on the agenda from Dennis Carlone:

“I think the voters and citizens of Cambridge deserve to know who are hosting Dennis Carlone’s trip to what he describes as ‘Israel and Palestine,’” Williamson started to say, but he was cut short by Simmons.

“It’s not a personality, it’s just a communication to the City Council,” Williamson tried to say.

But Simmons cut him off: “Time’s ticking away – Now your time is up. Thank you for your comments.”

Simmons said after the meeting that she stopped Williamson because “It’s sort of like name-calling, and I don’t think that’s appropriate,” she said. “You’re supposed to speak through the chair and to the chair. You’re not really even supposed to say nice things, you know, but I try to be a little relaxed on that.”

Both Rule 24C and the city’s Plan E charter requires citizens “shall have a reasonable opportunity to be heard at any such meeting in regard to any matter considered thereat.”

Additionally, just as with signs, the Supreme Court has spoken on this issue, and has an even higher standard for regulating the content of speech, rather than the form (such as signs versus oral speech). Instead of meeting a “significant government interest,” restrictive rules must be “necessary to serve a compelling state interest.”

Albano moves the microphone away from Xavier Dietrich during a meeting public comment period Aug. 10.

Last summer, the council halted a meeting in the middle of a speech during public comment by resident and council candidate Xavier Dietrich regarding taxi and other regulation by the city’s License Commission.

Dietrich’s political and business partner, Kim Courtney, spoke first, and when she criticized Andrea Spears Jackson, then chairwoman of the commission, she was interrupted by councillor Tim Toomey, who characterized her statement as a “personal attack” and suggested it was against the rules.

Courtney was followed by Dietrich, and councillors objected to his comments as well, taking the additional steps of halting the meeting and leaving the room. Albano, the council assistant, turned off Dietrich’s microphone as councillors departed.

On Jan. 14, at the beginning of the term, Simmons quietly appointed a “special ad-hoc committee” to look at changes to council rules. The appointment of the committee was not publicly announced, and its meetings were not publicly noticed. The members of the committee were Simmons, vice mayor Marc McGovern, councillors Nadeem Mazen and Jan Devereux, City Clerk Donna Lopez and Albano. City Solicitor Nancy Glowa attended and participated in the meetings.

The committee added speech restrictions on the public comment period:

“The following will not be tolerated: uttering fighting words, slander, speeches invasive of the privacy of individuals, unreasonably loud or repetitive speech, and/or speech so disruptive of City Council proceedings that the legislative process is substantially interrupted. Any person engaging in behavior that disrupts the proceedings such that the legislative process is substantially interrupted will be warned once by the chair that if his or her disruptive behavior continues he or she will be requested to withdraw from the meeting, and if the behavior continues, the speaker will be asked to withdraw from the meeting. If the speaker does not withdraw from the meeting as requested by the chair, the chair may authorize a constable or other officer to remove the person from the meeting.”

Despite being charged to review the quorums of subcommittees, the committee proposed no changes to quorum requirements. McGovern said the committee talked about changing them, but ultimately felt leaving quorums at two or three members was the best way to allow subcommittees to transact business.

The time for the public to speak at public hearings (but not regular council meetings) was also narrowed. Under last year’s rules, a speaker had five minutes; under the new rules, they have “three to five” minutes, and the chair has discretion to change limits. Historically, the council often enforced a three-minute limit at public hearings, despite what the rules said.

This story was updated April 30, 2016, to correct the membership of the mayor’s “special ad-hoc committee” on council rules; though the mayor requested that former city clerk Margaret Drury serve, Drury was unable to attend because of conflicting commitments. It was updated May 2, 2016, to note that Simmons was also a member.