Things get heated at City Council meeting, and it’s candidates turning it up, feeling it 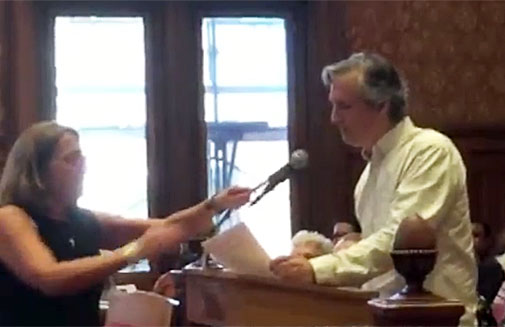 Things get heated at City Council meeting, and it’s candidates turning it up, feeling it

Three candidates for City Council ruffled feathers last week at the body’s sole meeting of the summer, two accusing the city of enforcing laws selectively and another pointing out a lesser double standard: who gets to eat and drink in historic City Hall chambers.

Kim Courtney and Xavier Dietrich rose to speak separately Aug. 10 on the city’s approach to handling car services such as Uber and Lyft in their competition with highly regulated taxis, both saying that city actions were leading to a perception of corruption. The couple had been greeted with hostility by the License Commission when trying to open a wine bar and charcuterie in Mid-Cambridge last year and have since watched the commission closely and become increasingly involved in city politics.

Despite pleas from taxi drivers angry and worried about their struggling industry, councillors are staying largely out of the fray and instead urging state legislators to act, as explained by councillor E. Denise Simmons: “It’s not going to be enough if we were to take action, because I just don’t know how we would regulate that.”

In responding to the city’s stance, Courtney spoke first, asking the city “to enforce the law” on car-service drivers who are “intentionally violating laws that apply to them.”

“This issue exemplifies what I consider to be a systemic malfunction in Cambridge city government. Our city manager, Richard Rossi, refuses to perform his duty to oversee the License Commission, declaring it to be ‘independent.’ This failure has resulted in the commission engaging in gross violations of the laws, as we see here with the taxi industry. Similarly, the commission has failed for six months to close down a liquor store that has been operating for 10 years with what the commission and [state Alcoholic Beverages Control Commission] declared is an invalid liquor license.”

“The people of Cambridge have the right to an impartial interpretation and a faithful execution of the law, and the right to reform, alter or totally change the government when it fails them,” Courtney said, before going too far for some councillors: “It is time to replace License Commission chair Andrea Jackson with someone who is competent and qualified for that position. It is time for the council to begin a search for a new city manager.”

At the mention of Andrea Spears Jackson, who gave notice this summer and held her last meeting leading the commission Tuesday, councillor Tim Toomey called out a point of order to remind Maher that “there are no personal attacks allowed in this chamber. The speaker is clearly out of line. And as an attorney she should know better.”

But Courtney was done speaking.

Dietrich followed her, echoing her statements and putting attention on the commission, which enforces laws concerning taxis, and on Rossi. When Dietrich also referred to commission inaction on liquor law enforcement, specifically at a business whose owner asked the commission to block the charcuterie and wine bar from opening, first Maher and then Simmons balked. The mayor banged his gavel and Simmons called for a recess. As most councillors filed out, Dietrich’s microphone was turned off and physically moved away from him by council staffer Sandra Albano, so he turned to the audience to finish reading his statement.

The assembled taxi drivers applauded loudly as he finished.

Outside the chamber, vice mayor Dennis Benzan told a driver in passing that “if you’re looking for allies, that’s the wrong place.”

But the driver, Michael Gervais, responded angrily, saying as he entered Sullivan Chamber again that Courtney and Dietrich “have First Amendment rights.”

The council’s rules of courtesy say “All persons shall confine their remarks to the question under debate and avoid personalities,” and the general duties and powers of the chair include that “the mayor shall preserve decorum and order.”

This is not the first time a mayor has recessed a council meeting to deal with heated public comment. In the summer of 2012, amid four hours of public comment about zoning for a development near Central Square, members of the public expressed anger over the rescheduling of a vote. As a police officer made a rare appearance in City Hall, resident Cathy Hoffman rebuked the council for the “tremendous disrespect” it showed with the surprise rescheduling and said she would not leave the microphone until she got an answer why the vote was delayed. Several other members of the audience stood and clustered around her before the council recessed, then held a close vote resulting in a decision to explain to the public the reason for the rescheduling.

Benzan appeared sensitive to issues of protocol at the Aug. 10 meeting. At the end of councillors’ discussion on the size of fees big developers might pay per square foot into a fund to help keep affordable housing in the city, Benzan, temporarily running the meeting for Maher, said, “Attacking each other over linkage fees – whether it should be $12 or $24 – is really not helpful to anybody.”

It was a puzzling remark after fairly mild, policy-focused debate, leading councillor Dennis Carlone to ask permission to speak:

“Just a minor correction, vice mayor. Nobody attacked anybody. We’re talking about ideas and ways of solving it, and I think we all agree – which I feel good about – that we have to do even more. The crisis in affordable housing is at its peak in Cambridge, compared to all the other towns around us, and that’s what we were talking about. There was no personal attack, it was discussion, and that’s what we’re supposed to do.”

When the council moved the linkage policy to a second reading, on the way to approval but not yet there, Benzan puzzled some listeners again by saying, “I think everyone in here should clap.”

There was a pause and a second of scattered applause. Councillors have told audience members several times during recent meetings – including during the Aug. 10 meeting – that they should not be clapping during public comment.

Eating in the Ackerman 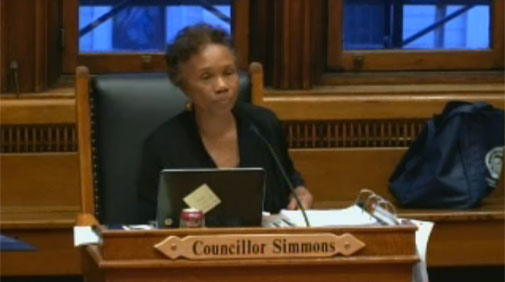 A can of soda is visible on the desk of city councillor E. Denise Simmons. Councillors are at their desks for much of meetings that can stretch to longer than five hours.

Another clash of council vs. public behavior took place in the nearby Ackerman Room, a handsome paneled room with a large television monitor that takes overspill audiences from council meetings who want to watch the action in air-conditioned splendor. When council candidate James Williamson came in eating a yogurt parfait, he was told by City Hall authorities that no eating or drinking was allowed in the room, which had only recently been refurbished. The conversation got heated, with Williamson pointing out there was no sign stating the rule and, professing harassment, telling the man noting it, “Fuck that shit.”

Eventually, Albano came in and posted two signs, similar to those outside the council’s historic Sullivan Chamber, affirming that there is no eating or drinking in the Ackerman Room.

Almost immediately afterward, as the giant television monitor showed various councillors speaking in the other room during the five-hour meeting, drinks including water and soda  were visible on their desks.