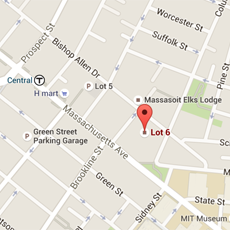 A conflict that began brewing inside a Central Square nightclub boiled over early Sunday as the area’s clubs closed, leading to gunfire in a nearby parking lot as disgorged crowds went to to find their cars and head home, police said.

There were no reported injuries or victims from the incident, which took place around 2:14 a.m. in the public Lot 6 between Massachusetts Avenue and Bishop Allen Drive near such hotspots as The Phoenix Landing, The Middle East and Monroe.

Witnesses called in the incident, but officers were already in the area and heard the shots go off, said Jeremy Warnick, director of communications and media relations for Cambridge police.

There were no suspects to be found when police arrived, but officers talked to witnesses and canvassed the area, finding not just 13 shell casings but two guns as well, Warnick said. Two cars in the parking lot had been hit by gunfire.

“Due to the active investigation, questions about the firearms and possible suspects are not able to be addressed at this stage,” Warnick said.

All indications are that this incident was not random, he said, urging citizens to come forward with more information about the incident.