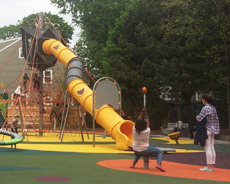 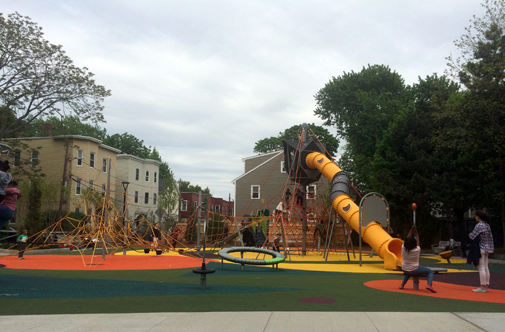 The playground at the city’s Putnam Avenue schools is often crowded with children ranging from pre-kindergarten to high school age. (Photo: Marc Levy)

Police were called to the Putnam Avenue Upper School on Friday for a fight between two teens, and one parent is calling it part of a pattern of violence that leads to “bullying and abuse” of elementary school children by middle-schoolers.

Administrators, however, see the incident as the kind of thing that happens among boys sometimes – unfortunately – with the younger kids as uninvolved bystanders, and related to a new playground that gets crowded after school hours.

“It happened on a Friday afternoon after school and was something of an isolated incident,” Chief Operating Officer James Maloney said, referring to the playground incident that sparked a police report.

The upper school for sixth-, seventh- and eighth-graders at 100 Putnam Ave., in the Riverside neighborhood, shares a campus with the Dr. Martin Luther King Jr. School, which has pre-kindergartners through fifth-graders. The $95.5 million school structure and playground have been open for only four months, and the playground was the last piece to open, as allowed by more consistently good weather. After school Friday, there were various groups on and around the campus’ playground, including teams playing a lacrosse match, according to one report.

“The playground is filled. It’s an amazing playground and a big draw, and it’s filled every afternoon after school” with kids from the two Putnam Avenue schools and Department of Human Services after-school programs, the East End House nonprofit organization, children who come play independently and even high school kids who come to play basketball, Maloney said. Some kids are accompanied by parents, and some are not.

“It’s a very busy park. And it’s great that it’s busy,” he said. “There has been a concern on the part of a few parents that there was some friction between kids.”

Samir Bukhari said he arrived at the school Friday to pick up his children and was alarmed to find two police cars and an ambulance – and more alarmed to be told a fight had broken out “steps away from my third-grader and pre-kindergartener.”

A police report confirms that at 5:24 p.m. Friday three officers were sent to the school to deal with a fight between two 13-year-olds that included strong words, pushing and punches. The fight had been broken up once, but was rejoined as one teen hit the other with a traffic cone. Between the two parts of the fight, workers younger children were moved away from the violence, Maloney said.

Only one boy was a member of an after-school program on campus, workers told police. The other boy is “home alone till later at night after school,” according to the police report.

While there was a Pro EMS ambulance at the school, it wasn’t used. Hospital treatment for minor injuries from the fight was declined by a parent.

Bukhari said he agreed generally with the police report, but had been told by his son that “there were several kids who joined in the melee” before the officers arrived. He called it part of a “pattern of abuse” that, after complaints from his kids that had been confirmed by after-school program teachers, he had brought to the attention of Cambridge Public Schools two months earlier. There was no response, he said.

The upper schools opened in September 2012 as part of the district’s Innovation Agenda. In the run-up to approving the agenda and creating the schools, defenders of the district’s former JK-8 schools spoke about their nurturing environment, with parents referring to how it avoids jarring transitions and limits bullying and how seventh- and eighth-graders would look out for the kindergartners.

There have been no issues on the playground during the day, when only students from the two Putnam Avenue schools are there, Maloney said, quoting principals Gerald Yung of the Dr. Martin Luther King Jr. School and Mirko Chardin of the upper school. But the sudden popularity of the bus stop-adjacent playground could mean growing pains outside of school hours.

Yung and Chardin of the upper school have begun putting protocols in place around the playground, including keeping one area open only for King student until the school closes at 4 p.m., Maloney said. A Cambridge School Department Safety Officer will be at the playground after school hours for a short time to monitor the situation, and a Cambridge Police Department school resource officer will be present “from time to time during that same period so that we get a better feel for what is happening.”

“It’s a great park. It is packed. I went by one day and last week and I was astonished how many kids were in it,” Maloney said. “We want to sure everyone’s getting along.”