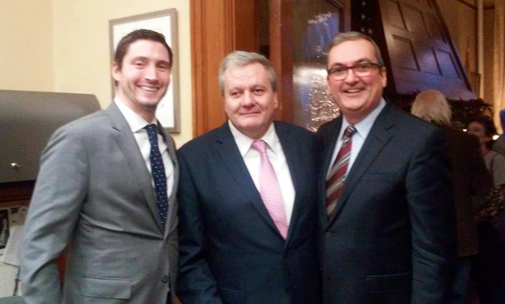 As Donald Trump takes his victory laps toward the Republican nomination for president, with supporters who include white supremacists, people who fear Mexicans “rapists” and voters who feel America is safest if it keeps out all Muslims, Cambridge is going the opposite direction to make life and the quest for citizenship easier for immigrants.

An 11-member volunteer Commission on Immigrant Rights and Citizenship being established by the city is taking applications for membership through June 10. Expected to hold its first meeting in September or October – shortly before Americans vote to embrace or repudiate the xenophobic platforms of Trump’s campaign – the commission is expected to be a clearinghouse for information and a guide to City Hall and support services that deal with immigrant rights and citizenship. It will also fight “prejudice and discrimination against immigrants,” city officials said.

The commission was enacted a decade ago, having been written into city law in April 2006 but going without city action until May 9.

It is not entirely clear why; the responsible official at the time, Robert W. Healy, has been retired as city manager for some three years. “While the CIRC was not appointed at the time, the city’s commitment to supporting and providing services to our immigrant communities has continued and grown since 2006,” said Deputy City Manager Lisa C. Peterson, after being asked to explain why no action was taken that year.

The commission was announced just as a similar effort was getting underway, led in large part by private citizens and recently elected city councillors.

The city’s actions were praised by Emmanuel “Manny” Lusardi, a resident who has been beating the drum for more political representation for the city’s foreign-born residents as well as for support for immigrants outside the country, including raising money and finding equipment to donate to Syrian refugees in Europe.

Lusardi had been pursuing a Cambridge immigrant aid initiative without being aware of the city’s forgotten law setting up a commission. Working out of the office of city councillor Nadeem Mazen on a Non-Citizen Advocacy Group, Lusardi and activist Sylvie de Marrais supported creating “a non-citizen representative” to work with the City Council, but when the idea was floated in a March 21 policy order by Mazen and Mayor E. Denise Simmons, it was greeted with concerns that there would be an unelected 10th councillor. Ultimately, the order was amended to request that a hearing on “all issues related to non-citizen representation and outreach in Cambridge” be held by Mazen’s Neighborhood and Long Term Planning, Public Facilities, Arts and Celebrations Committee and vice mayor Marc McGovern’s Civic Unity Committee.

On the way to that hearing, held May 12, expecting an environment in which councillors would have to be won over to the idea one by one, Lusardi was surprised by the news that the city was creating its commission. “I was standing in line at Starbucks in Central Square and got an announcement from the city on my phone,” he said.

“I’m considering this a win. It solves the problem [of implementation] overnight. And now we’re just going to refocus on how to develop it,” Lusardi said. His one concern is having an 11-member commission of volunteers, rather than following the model being used in Boston – a fully funded Mayor’s Office of New Bostonians with a paid staff of seven people – when more than a quarter of Cantabrigians are foreign-born, and more than 61 percent of that group lacks citizenship, according to Mazen and Simmons.

Emmanuel “Manny” Lusardi is shown between legislative aide Jefferson Smith and then mayor David Maher in December at City Hall.

Though details on how the commission will operate were scant, Peterson said its first task will be to undertake a “gap analysis” to see what services to immigrants are lacking in Cambridge and need to be addressed, and in what order of priority.

Among other initiatives, Lusardi and de Marrais hoped to see information for foreign-born citizens centralized, since it’s currently scattered around the city in various departments in a potentially confusing way, and possibly for an ID card program to help avoid arrests for immigrants outside of Cambridge, where police might be trained to arrest undocumented residents when they encounter them. (Cambridge became a “sanctuary city” for undocumented immigrants in May 2006, a rebuke to efforts “to pass federal legislation that criminalized civil violations of immigration laws,” Peterson said. “That federal legislative effort failed, but various states enacted laws or were contemplating efforts to deputize state police to inquire into individual’s immigration status – a federal law concern. [Then Gov.] Mitt Romney had taken steps to do this, but Gov. Deval Patrick put a stop to it.”)

The commission is step one, de Marrais said. A physical office with a staff is the next step.

But de Marrais and Lusardi call the very existence of the commission important symbolically.

“If Trump wins, he’s talking about figuring out a way to kick 11 million people out of this country … progressive cities like Cambridge and Austin need to take a stand now and get prepared,” Lusardi said. “I was surprised that he got past July. And the reason why he did is that there are a lot more people, millions more people, that are racists and bigots than we previously thought. I thought it was a dying breed, [but] he’s getting millions of votes for a reason, and it’s not just because he’s funny and he ‘tells it like it is.’ ”

Trump’s political success shows that “the climate has changed,” Lusardi said, and there’s cause to worry about political action against immigrants even if Trump isn’t elected. Deportations have surged even under Democratic President Barack Obama, he noted.

When Cambridge voters went to the polls March 1 in the state’s presidential primary, Trump was a winner. A little less than 10 percent of the electorate voted Republican, or 3,137 people; among those voters, Trump led with 39.2 percent of the ballots, followed by Rubio at 24 percent, or 1,090 people. (In Somerville, slightly over 11 percent of the electorate voted for a Republican, or 2,783 people, but John Kasich got the majority of primary votes – 33.6 percent, or 1,055 votes – and Trump was runner-up at 25 percent,  or 783 votes. (Trump won statewide with 49.3 percent of GOP votes, trailed by Kasich at 18 percent, the campaign-ending Marco Rubio at 17.9 percent and Ted Cruz at 9.6 percent.)

For de Marrais, her work toward forming an immigrant-aid group wasn’t a response to the rise of Trump, “but it does help fuel what I do.”

“It makes it a little better that Donald Trump would hate what we’re doing,” she said.