Campaign contributions bear out the votes: Clinton friends are rich, Sanders’ are many 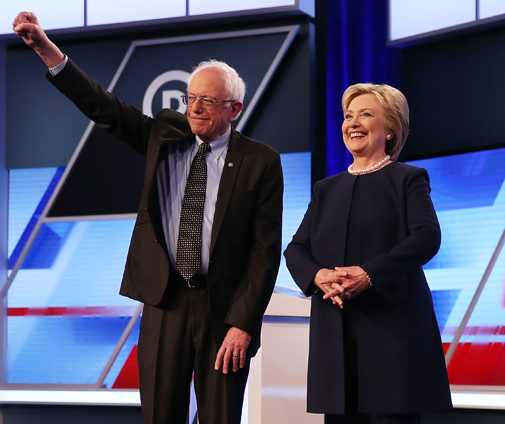 Campaign contributions bear out the votes: Clinton friends are rich, Sanders’ are many

The results of the March 1 presidential primary have long been known: Hillary Clinton edged out Bernie Sanders statewide, 50.1 percent to 48.7 percent, with a starker win in Cambridge of 53.1 percent to 46.14 percent, and a significant loss among Somerville voters, where she got only 41.9 percent of the vote to Sanders’ 56.9 percent.

While 9.6 percent of Cantabrigians at the polls voted in the Republican primary, or 3,137 people, it still surprised some in this lefty bastion that Trump won the day among them, with 1,090 votes (or 39.2 percent), followed by Rubio at 668 votes (or 24 percent). Somerville Republicans, who numbered 2,783 and were 11.4 percent of the city’s voters that day, looked less radical by giving Kasich the majority of the primary votes – 1,055 (or 33.6 percent) – and giving Trump only 783 (or 25 percent).

But more context is found in exploring the two cities’ political donations this season, a task painstakingly undertaken by RentHop, an apartment search website that has three former Massachusetts Institute of Technology students among its key staff. Last month the company dove into Cambridge’s open data to look at the parking ticket situation; this month it released an extensive report on the area’s spending on national political candidates through the most recent Federal Election Commission filing deadline of Feb. 20.

From RentHop’s perspective, the analysis serves “the amount of thought that goes into choosing” a neighborhood. “What if you find out the political views of your Boston and Cambridge neighbors before you see them wearing your least favorite candidate’s shirt while waiting for the T?” the company asked in its introduction to the data.

It didn’t look just at Cambridge and Somerville, but at a “Boston/Cambridge/Quincy” area constituting some 8,284 donors who gave a cumulative $6.5 million – with Clinton far in the lead with $3.3 million of that, followed by Sanders at a distant $995,478. These figures describe local giving trends well, as Clinton’s millions come from 2,703 donors, while the lesser amount Sanders has to work with represents far more people: 3,203 donors gave, or 19 percent more people than gave to Clinton. 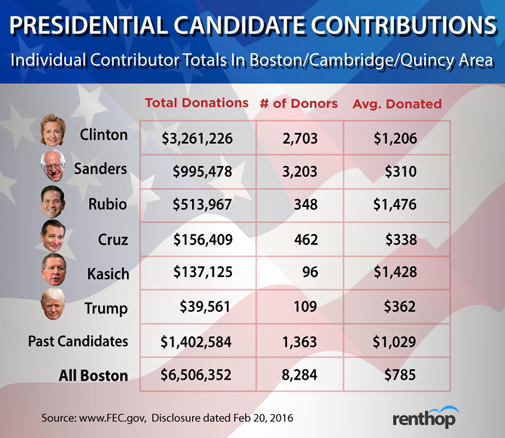 “Overall, Hillary Clinton has dominated in the Boston area in terms of dollars raised, but trails Bernie Sanders in donors,” RentHop said. “Having over triple the amount of money raised certainly doesn’t hurt, but it arguably is not better than more people having your back.” 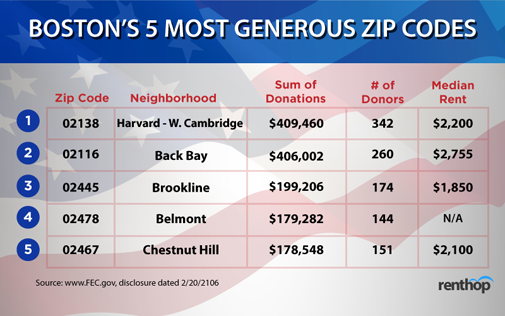 When RentHop looked at the five most generous ZIP codes in its analysis, it was the Harvard Square area and West Cambridge gathered in 02138 that topped that list – a mere 342 people in this area together gave $409, 460. (Right behind it was Boston’s Back Bay.)

Sanders still gets contributions from that ZIP code – college areas are a base of power for the socialist candidate – and in fact it tops his contributions source list just as it does Clinton’s. His campaign has received $55,957 from donors there, albeit from only 13.7 percent of donors in that area (compared with Clinton’s 70.8 percent of donors). Compare that with his No. 2 source of donations in the analysis: the area around the Massachusetts Institute of Technology and Mid-Cambridge, where he brought in $45,219 from 53 percent of the 02139 ZIP code’s donors. (The Tufts University area, 02144, is fifth with $29, 637 in contributions from a whole 60.6 percent of area donors.)

Meanwhile, in RentHop’s analysis, “Boston wallets seem to say: ‘Who is this Donald Trump guy?’”

While the insurgent Republican found his most support in neighborhoods in Allston and Norwood, that was only $2,700 from each – at 12.7 percent and 18.5 percent of donors, respectively. In Lynnwood and Boxford, where he has his highest rankings of donors, that represents a whole four people in each of the two towns.

“The data on Trump is quite scattered and sparse,” the RentHop text says. “At the scale of numbers reported, it would only take one married couple, each giving the regulatory maximum, to move the needle and suddenly become the focal point of Donald fans in the Boston area.”

The complete RentHop analysis, with more graphics and an interactive map that allows exploration by ZIP codes and and can be filtered by candidates, is here.

These graphics show all ballots cast for all candidates, even if they had long since bowed out of the race and were no longer formally campaigning. But they show only donations for major candidates, and mainly those still in the running for president. (Republican Marco Rubio is the exception.) RentHop lumped all other donations into a catchall category called “other past candidates.”

In Cambridge donations, there is a significant money that is not represented in the interactive graphic below: $88,524 from 70 donors citywide, with 36 of those (51 percent) coming from a single ZIP code – that of Harvard Square and the surrounding neighborhood. Those 36 donors gave $59,031 of the total, or two-thirds (actually 66.7 percent), despite also contributing so significantly to the Clinton campaign:

There were far fewer Somerville donations to the candidates not represented in the interactive graphic below: $14,956 from 16 donors citywide.

Again, keep in mind when looking at the below interactive graphic of Cambridge donations that 70 donors throughout the city’s five ZIP codes gave a $88,524 to candidates who are not included here …

… and that Somerville donations to the candidates not represented in the interactive graphic totaled $14,956 from among 16 people citywide.