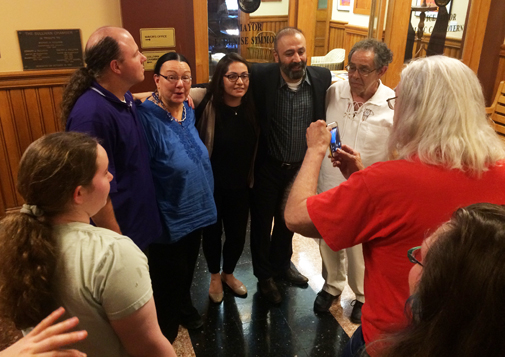 Indigenous Peoples Day has replaced Columbus Day in Cambridge, a decision made unanimously Monday by the City Council. It means the next second Monday in October and those afterward will celebrate and remember native peoples who fell victim to colonization and slavery, rather than the man identified by speakers as introducing genocide to what was thought of as the “New World.”

An order before the School Committee will decide separately how the public school district will handle the holiday, Mayor E. Denise Simmons reminded officials and residents during the vote. “I’m sure this will be adopted,” she said.

Also left to be decided is what will fill the void for Italian-Americans who came to see Columbus Day as an appreciation of their immigrant experience – like many others’, filled with violence and bigotry before assimilation into U.S. culture. Past speakers such as former mayor Anthony Galluccio said they hoped a separate day to honor the immigrant experience would result.

But among the lengthy comment by residents and officials Monday, no one spoke in favor of keeping Columbus Day as a holiday, and some Italian-Americans spoke with a sense of relief about letting it go.

“The truth is the truth”

“I view changing Columbus Day to Indigenous Peoples Day really as a cleansing for me as an Italian-American,” said vice mayor Marc McGovern, whose family is half-Italian and half-Irish but said he was raised in an Italian-American household. “I do not want Christopher Columbus to be representing my culture. So I don’t look at this as something that’s being taken away … I view it as making it a day actually can be proud of, as opposed to a day that I get off from school for someone who committed, even by those standards, some of the worst atrocities – and genocide – in world history.”

Fellow Italian-American councillor Dennis Carlone, who discovered as a teen that he also had some Cherokee blood, said, “The truth is the truth, and like the vice mayor I have no confusion on what is right in this issue.”

Before the council got a chance to vote, there was a series of citizen speakers, including many Native Americans and a group of eighth-graders from the Putnam Avenue Middle School. Returning speaker Moomanum James, co-leader of United American Indians of New England, foreshadowed the councillors’ comments.

“We don’t need to perpetuate the myth of someone who was a butcher and murderer. There are other people of Italian heritage – Galileo, DaVinci – who gave us things all of us can use, but not Columbus,” James said.

Cambridge is not a leader in taking Columbus Day off municipal calendars. Berkeley, Calif., led the way in 1992, followed by various cities nationwide. (Some, such as Seattle, opted to add an Indigenous Peoples Day to its calendar rather than replace Columbus Day.)

The effort leading to the Monday vote began in late fall, initiated by councillor Nadeem Mazen and Dennis Benzan, an attorney who then on the City Council, but was set aside in December. When the issue finally returned in March, it was decided to hold a joint meeting of the council’s committees on Neighborhood and Long Term Planning, Facilities, Arts and Celebrations (led by Mazen) and Civic Unity (led by McGovern). The meeting was also rich with public comment that fleshed out the history of the movement, with the Rev. Clyde Grubbs noting how militias drilled in front of his First Parish Unitarian Universalist church in the 1600s before heading out to fight Native Americans; Mahtowin Munro, another co-leader of United American Indians of New England, noted that the idea for Indigenous Peoples Day began in the 1970s, but that past Cambridge officials had declined to act on it when the change was proposed.

After the council vote, James, Munro and others gathered just outside Sullivan Chamber in City Hall to cheer and pose for photos to commemorate the policy win.

“Boston is next,” they announced.

At the May 26 meeting, McGovern added a provision to the order that the Cambridge Historical Commission should lead work “to properly recognize, in the written history of Cambridge, as well as the marking of historical sites, the indigenous people who resided on this land prior to the founding of Cambridge.”

Copies of the council’s resolution are to be sent to the North American Indian Centre of Boston, the Nipmuc Nation, the Mashpee Wampanoag Indian Tribal Council, the Wampanoag Tribe of Gay head, The Praying Indian Tribes of Natick and Ponkapoag and the Massachusetts at Ponkapoag Tribe – all descendants of people indigenous to the Cambridge area.