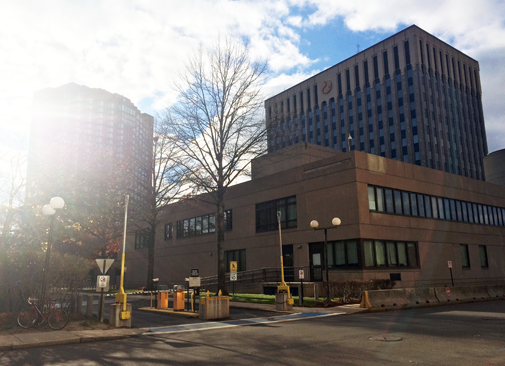 The 14 acres in Kendall Square held by the federal government for the John A. Volpe Transportation Center has been called some of the most desirable real estate in the country, or even the world. (Photo: Marc Levy)

The federal government issued a Request for Proposals to select the developer of the John A. Volpe Transportation Center land in Kendall Square on Wednesday, setting a mid-September deadline for responses. This is the third and final stage in the government’s process to select a developer to put up a new 400,000-square-foot building on the 14-acre lot. In exchange, the developer gets the rest of the parcel to develop according to Cambridge’s zoning, and no money will change hands.

The Volpe parcel, at 55 Broadway just across from the Kendall Square MBTA stop, has been called some of the most desirable real estate in the country, or even the world. It is the last large undeveloped parcel of its size in Cambridge.

But there are many unknowns.

The federal government has not released its RFP publicly, citing “procurement integrity” laws, though General Services Administration spokesman Patrick Sclafani was unable to be more specific about how a release would compromise the process or to explain the legal justification against disclosure. It is not clear how the government’s document falls under the four protected categories of “contractor bid or proposal information” or the 10 of “source selection information.”

Sclafani suggested filing a Freedom of Information Act request to shake loose the document, which would describe the government’s expected needs on the site.

The zoning is also unclear, but for a different reason – it remains undecided. Last year the City Council halted its zoning process, against the recommendations of city planning staff, because it felt it did not know enough about the federal government’s intentions. Cambridge would like to retain as much open space as possible and not allow buildings any taller than they might have to be for the financing of the project to work. But if a developer can’t get enough value out of its buildings, it won’t be able to fund construction of the new government building, and the deal could fall apart.

The government wants to finalize its agreement with a developer before the Obama administration departs in January, because the next president’s administration might change course and cancel or delay the project, Cambridge officials have said.

In February, the council asked the city manager to  form a task force of residents, local businesses and neighborhood groups to examine the proposed Volpe zoning. The manager replied this month, proposing a two-phase working group structure. In the first phase, the task force would develop broad parameters for the project including “urban form, public realm and goals for the character of the area,” according to a memo from Iram Farooq, head of the city’s planning agency. It calls for three to five meetings over the summer, with planning staff and a consultant helping.

The second phase would take place after the government selects a developer and involve the working group engaging in “focused discussions” with the developer, Farooq’s memo said.

City, residents in the dark

Peter Crawley, president of the East Cambridge Planning Team, seemed concerned about the confidential nature of the RFP. “If not with the general public, is the RFP being shared with the city and the pending Volpe Task Force?” Crawley asked.

But the answer is “no,” according to Farooq, reached while traveling internationally. “The city does not have a copy,” she said.

Farooq said the government had told the city it would be a closed process.

“I would think that the RFP development vision/guidelines would need to align with the zoning guidelines the city and task force is tasked with creating,” Crawley said. “It would seem that any bidder would also want to understand not just what the [federal government] thinks is possible on the site, but what the city does. At minimum, the RFP process and the underlying zoning development process need to advance in parallel.”

City councillors expressed some of the same concerns at a June 6 meeting, and City Manager Richard C. Rossi seemed to agree that the government’s approach had disadvantages. “It is a really weird process,” he said.

The federal government also declined to provide a list of the potential bidders to whom the RFP has been released, but some of that information is already known: It is being issued to bidders who qualified at the previous stage, and one of the mandatory qualifying steps was to meet with Cambridge’s planning department.

It is not clear how many of those firms actually responded to the government’s qualifying phase and met its criteria, however.