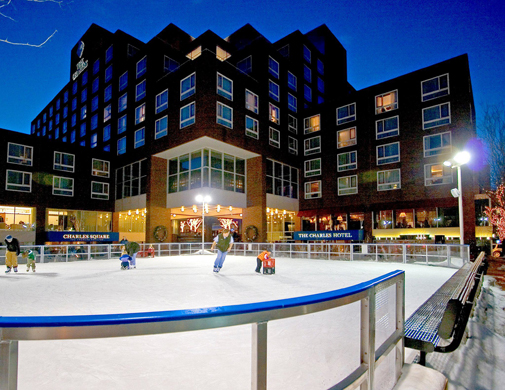 The ice-skating rink set up annually by the Charles Hotel since 2004 may be replaced by a farmers market. (Photo: HarvardSquare.com)

A winter farmers market is planned for Harvard Square as a long-term replacement for where the Charles Hotel had been running a seasonal outdoor ice-skating rink, hotel general manager Alex Attia said Tuesday.

With part of the rink stolen in October from its trailer storage facility in New Hampshire, “we decided not to buy another one,” Attia told the License Commission. “We’re hoping to have a winter farmers market in that space, if we can get some farmers to agree to do that.”

The rink lasted for a decade before thieves made off with crucial parts during a trailer heist. During the summer, the same brick courtyard between the hotel and Harvard’s Kennedy School of Government – known as Charles Square – hosts a limited-menu outdoor Terrace Bar run by Legal Sea Foods from 11 a.m. to 11 p.m. on weekends and until 10 p.m. weekdays, but a small farmers market sets up nearby on Fridays (noon to 6 p.m.) and Sundays (10 a.m. to 3 p.m.).

The summer market, now in roughly its dozenth year, operates from late May to late November with a handful of vendors, including Grateful Farm and Busa Farm for produce, Kimball Fruit Farm for produce and pies and Stillman’s Farm for meat, Hi-Rise Bread for bread and pastry and Formaggio Kitchen for cheeses. The absence of the ice rink could keep it in place year-round. 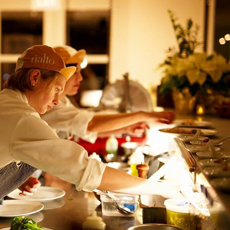 Another change is coming to the hotel, which opened in 1985 with the restaurant Henrietta’s Table in place and added the fine-dining establishment Rialto in 1994: With Rialto closing this week after 22 years, the hotel will cut the second restaurant space from its own license and remove Rialto’s interiors to clear the way for an independent restaurateur to lease, attorney James Rafferty said Tuesday.

There will be an application coming to the commission within the next month for the 1 Bennett St. location, which is part of the Charles Hotel’s building but will now operate on its own, Rafferty said. It’s a common model, seen at Restaurant Dante at the Royal Sonesta Boston hotel in East Cambridge, near the Lechmere T stop, or the Bisuteki Tokyo Japanese Steakhouse and Sushi Bar at the Courtyard Marriott Hotel on the Charles River in Cambridgeport.