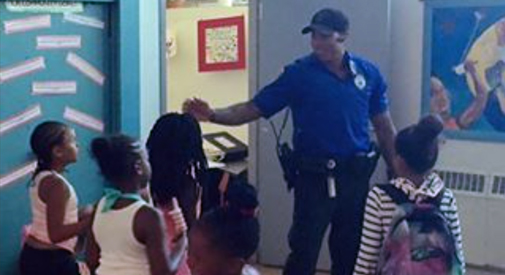 Our city isn’t perfect, but its law enforcement is a model for others
By Marc McGovern 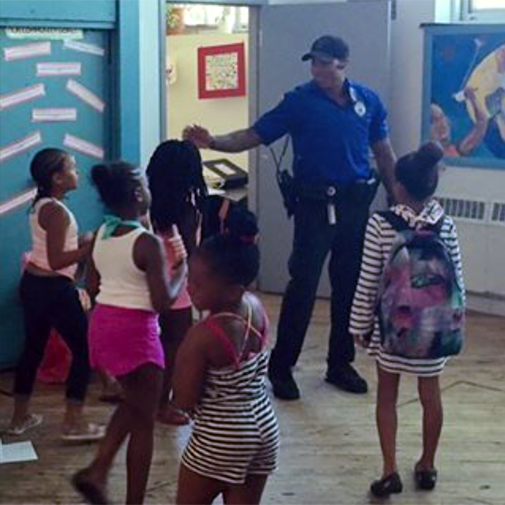 Cambridge Police Officer Steve Allen stops by to greet kids at the Community Arts Center on Thursday in this Instagram image posted by the police department. Click on the image to see the original post.

In the wake of the horrible violence that has occurred in our country over the past several days, many have emailed me asking what the Cambridge Police Department is doing to ensure similar events don’t occur here.

Let me begin by saying I am so sad, angry and frustrated by what is taking place across our country. I cannot watch another video of a young man of color lying on his back or having his hands up, only to be shot. I can’t take police – dedicated people who serve the community – being shot. It must stop. I would also never say that Cambridge is perfect; we have race and class issues as well, many of which we don’t confront. I will say, however, that the Cambridge Police Department is far ahead of most other communities around the country when it comes to community policing. We are, in fact, sought out by other departments around the United States for advice and training because we are considered a model.

“The Cambridge Police Department is a dedicated and diverse group of professionals who are committed to working with the community to make the City of Cambridge a safe and desirable place to live. Our mission is to partner with the community to solve problems and improve public safety in a manner that is fair, impartial, transparent and consistent.”

Training. The department has led the way and is a national model for how to train officers. The entire department has received specialized training that has helped to better serve this community, including topics such as “Policing the Teenage Brain,” “Mental Health First Aid,” “Managing Aggressive Behavior,” “Domestic and Gender-Based Violence,” “Elder Abuse,” “Procedural Justice and Police Legitimacy,” “Fair and Impartial Policing,” “Community Engagement” and “LGBTQ Cultural Competency,” to name but a few. Nearly one-third of Cambridge officers have been trained on crisis intervention techniques with the goal of providing that training for the entire department. According to acting commissioner Chris Burke, 25 officers just participated in Trauma Informed Training, “considered to be a first in the country for a police department. Participating officers trained with local service providers to gain a better understanding and appreciation of officer wellness and resiliency, as well as trauma-informed approaches to calls for service and investigations with domestic violence and sexual assault survivors.”

Policies. The department has a number of policies in place designed to monitor officer discretionary decision-making, bias-based policing and vehicle stops and use-of-force reporting. The department uses data to drive supervisory review and ensure officers comply with these policies, and if a pattern to the contrary is seen they take administrative action, including having officers retrained. According to department statistics, there has been a significant reduction in the overall number of citizen complaints; likewise, Police Review and Advisory Board complaint numbers have decreased. Quality of Service Assessment numbers on the department consistently rank its favorability at +90 percent.

Diversity. Cambridge was ranked by The Associated Press as one of the most balanced police departments in the nation. It exceeds all national standards in every category except for women offices, where it fell short by only 1 percent. The department  has 44 multilingual officers, including speakers of Spanish, Portuguese, Haitian/Creole, Chinese (Cantonese and Taiwanese), Greek, French, Tamil, Hindi, Arabic, Urdu and Russian.

Beyond that, the department has invested significant resources in community outreach efforts to our most vulnerable populations, including teams of officers who specialize in working with those struggling with homelessness and mental health issues. The department has two officers dedicated specifically to working with the homeless and have created a social worker position to help officers interact and work with those struggling with mental illness. The Safety Net Collaborative, in which the department partners directly with Cambridge Public Schools, Human Services programs and the Cambridge Health Alliance, have been so successful in reducing youth involvement in the criminal justice system that it too has been recognized as a national model.

As I stated initially, do I think we are perfect? No, I don’t. I work with many teenagers, mostly teenagers of color, and not every interaction they have with the police is positive. Could a police officer shoot someone in Cambridge? Yes. What separates us, however, is that we have a city and a police department committed to ensuring that every member of this community is safe and treated fairly. What also encourages me is that leaders of the department know they are not perfect and are consistently striving to be better. This is not a police department that shies away or runs from self-evaluation; if they see a problem, they will address it. Cambridge is not Baton Rouge, La.; Minneapolis; Milwaukee; North Charleston, S.C.; Baltimore; or Ferguson, Mo.

I know that when we see these horrible events taking place throughout the country we feel helpless, because how can we influence what goes on in Baton Rouge? So we look to our own community for change. I think there is a lot of opportunity for us to continue to grow in Cambridge, but I truly believe that we can take pride and solace in the fact that we are already so far ahead of the curve.

Marc McGovern is vice mayor of Cambridge and a social worker.