‘Ghostbusters’: They may hunt the paranormal, but this rebooted team specializes in chemistry 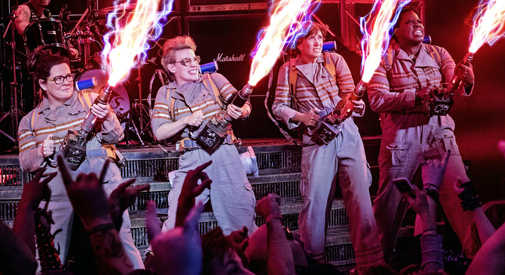 ‘Ghostbusters’: They may hunt the paranormal, but this rebooted team specializes in chemistry

Paul Feig is becoming one of the most interesting comedy directors today. Tackling yet another comedy sub-genre in this franchise reboot, he’s brought with a it a lot of charm and four leading ladies destined to become iconic in their roles the same way Bill Murray and Dan Aykroyd did with theirs in this film’s predecessor. “Ghostbusters” is an absolute blast and rejuvenates a summer of tired and listless blockbuster fare. 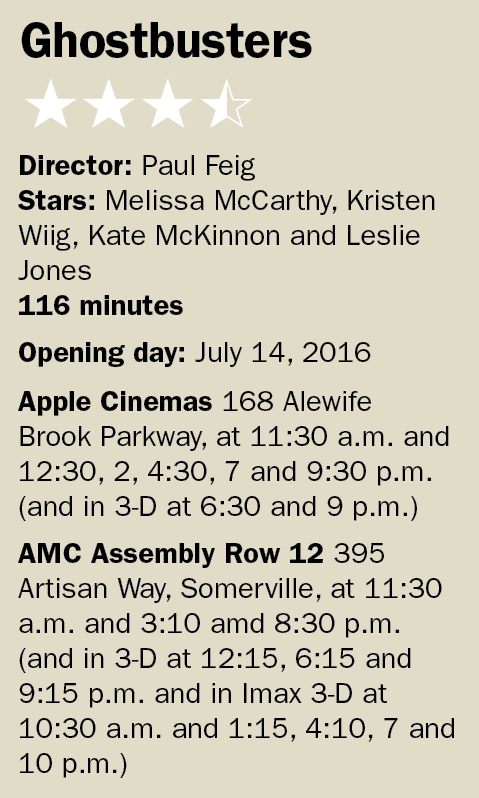 Following a storyline similar to the 1984 original, this “Ghostbusters” introduces us to Erin (Kristin Wiig), who is looking to finally get tenure at fusty Columbia University before an old book of hers about the paranormal is released; one thing leads to another and, suddenly disreputable, she’s given the boot. She joins forces with her old friend and co-author Abby (Melissa McCarthy) and her new partner Holtzmann (Kate McKinnon), scientists eagerly investigating further paranormal activity in the city. One dangerous encounter later and Patty (Leslie Jones) has joined the team as a New York City history buff.

The new team has formed, and it’s simply delightful.

These are four of the most talented women in comedy today, and while Wiig is noticeably less energized than the rest, they all do wonderful work in laying down solid characterization and breathing life into a stale franchise. McCarthy once again demonstrates why she is a certified movie star, able to make the simplest lines sing with offbeat delivery and a quirky grin. Jones could have been used more, but it was nice to see the character given much more to do than the trailers implied. It’s McKinnon’s Holtzmann that walked away with many of the greatest moments. She’s poised to have a breakout similar to McCarthy’s since “Bridesmaids,” and it would be well deserved.

She’s just one of the funniest blondes in the film, though, as Chris Hemsworth (of “Thor” fame) gets to show off his funny bone in an absolute ludicrous role: the receptionist who’s completely inadequate in everything he does but manages to skirt by on his beauty. We could have spent a full half-hour letting Hemsworth and McCarthy riff off one another, and it would have been a splendid way to spend the time.

The ensemble’s chemistry is integral to how well the film works and how much affection we feel toward these characters after only two hours, and without it the film wouldn’t have succeeded as it does. That’s not to say the film is without other merits. (One failing is that, with Feig once again choosing to shoot in Boston – following “The Heat” with McCarthy – it doesn’t take an expert on the city’s layout to be able to tell we’re not looking at New York City.) Feig injects a distinct abundance of color, something typically absent in a genre where directors and visual artists tend to emphasize dark and dreary grays and faded blues and reds (see: “Batman v. Superman: Dawn of Justice”). “Ghostbusters” takes the opposite approach, with purples and greens dominating the third-act battle, ghosts that are a luminescent blue and reds popping in the Ghostbusters logo. It makes for tonal verve that energizes the story even in slower-paced moments. Aside from some oddly choppy editing in the fight and training sequences and some lines that don’t land their mark, this science fiction comedy is everything a summer blockbuster should be.

“Ghostbusters” may not be revitalizing the science fiction genre, and there will be plenty who don’t believe it touches on the original (and that might make for a fun argument to have), but it offers up so much in the form of good-natured fun. It helps that Abby and Erin’s friendship is the heart of the film – there is no love interest to slow things down, just women scientists doing everything they can to save the day, celebrating what they love and refusing to apologize for it. There is always something worth celebrating in pure, fun cinematic escapism, and “Ghostbusters” delivers all that and a positive and empowering message to top it off, leading to a damn good time full of laughter, kinetic action sequences and a whip-smart script delivered by some of the most fresh and exciting women in today’s comedic world.