‘Batman v Superman’: If anyone wins this, it’s Affleck, not (spoiler alert) the audience 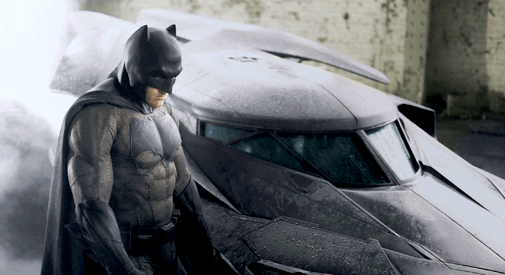 ‘Batman v Superman’: If anyone wins this, it’s Affleck, not (spoiler alert) the audience

Who knew Gotham and Metropolis were right across the bay from each other? Sort of like St. Louis and Kansas City, but each with their own superhero in the middle of a massive PR crisis. Over in Gotham, Batman’s been tagged as an unchecked vigilante; Superman has his own Senate committee to review his activities, newly minted as a reckless god because of the hundreds of innocents crushed in the streets as collateral damage from taking out General Zod as the two Kryptonians blasted each other through one skyscraping façade after the next in 2013’s “Man of Steel.” The scene evokes uncomfortably eerie images of 9/11. One such building laid to waste happens to be the Wayne Tower, workplace of many close associates of Batman alter ego Bruce Wayne – a catalyst for the titular grudge match of “Batman v Superman: Dawn of Justice.”

Zack Snyder, the hyperkinetic visual stylist who’s crafted such over-the-top spectacles as “300” and “Sucker Punch” but also demonstrated nuanced restraint with the highly underappreciated “Watchmen,” winds up in no man’s land with epic aspirations as he grandiloquently pits the two classic comic book giants against each other.

When it comes to screen time, or quality of screen time, Batman wins the battle hands down. Early on we flash back to a young Bruce Wayne losing his parents in an alleyway just after seeing a showing of “Excalibur.” The scene’s been done several times over (by Tim Burton and Christopher Nolan, recently) besides the choice of movie, and if Snyder’s going to go that far he should have taken a cue from that film and its masterful director, John Boorman, that movies, even those fueled by fantasy and beings beyond man, are driven by character development and plot integrity. Cool stunts and grandiose FX surely wow and awe, but they’re like a giant bag of M&Ms: Eventually it all just becomes mush.

Cambridge’s own Ben Affleck, an inherently stiff performer, slips into Bruce Wayne’s tux and Batman’s cowl with convincing ease. Henry Cavill, on the other hand, a perfect human specimen in his own right, is grounded by tedious perfection. Sure he gets to zip around and level malevolents as Superman, but there’s no edge to it, and when in civilian duds as Clark Kent, he spends most of his time cuddling up to Lois Lane (Amy Adams), a woman of intrepid integrity and carnal knowledge. There’s not much fire there either, but occasionally, when challenged on topics by his editor at the Daily Planet (his boss wants more on the last football game between Metropolis and Gotham than the recent crime wave Clark’s interested in) he stands up for journalistic integrity. Perhaps this Clark should have been in “Spotlight” – it’s the most alive the ubermensch hiding inside a nerd’s skin becomes. The tortured soul whose bitterness endears belongs to The Bat and his alter-ego, further blessed with a snarky but sincere rendition of Alfred the butler by Jeremy Irons, surely far more fun at a party than Ms. Lane.

Snyder chews up 90 minutes (of the two-and-a-half-hour running time) with simmering and seething before we get to the big showdown. A young Lex Luthor (Jesse Eisenberg, who seems to have genuine fun with the role) intercedes to pour gasoline on the smoking tinder, and somehow, Wonder Woman (Gal Gadot), who’s long been out of the game, gets back in the mix, though she’s given little to do until her bustier and whip come out.

At the screening I attended, the movie had a pre-taped preamble from Snyder asking viewers to not ruin the film for others by giving away spoilers. It perplexed me. To start with, the title tag “Dawn of Justice” implies a Justice League team-up is on the way, so glimmers of Aquaman and The Flash are expected, like we saw of Hawkeye in the first “Thor” movie leading up to “The Avengers.” He’s laid down the requisite steps to the franchise kingdom. One can only hope the next tier will either be something darker or at least shoot for levity by adding in the Wonder Twins.

Secondarily, and more to the point, is that the big super blowout at the end arrives not so spectacularly, but as a flabby, muddled mess that seems to have become the standard for all comic book ventures these days – build it, tease it and then cap it with a wham-bam homage to Michael Bay. Witnessing Batman go through SEAL-level training and don the cumbersome grizzly-bat-suit whets the appetite for the finale, but the meddling misdoings by Lex Luthor spin unsatisfactorily into clichéd twists and the gonzo editing and bombastic overuse of FX ultimately neuter any prospect of superheroic joy. The mayhem at times becomes so frenetic, bordering on the arbitrary, that you feel like you’re ensnared in an angry wave, tumbled upside down, disoriented and unable to make sense of anything until you come up for air. When you do, you just want to pinpoint land and get out of the water.

At the end of the dawn, there’s no real justice per se, just smug, contrived posturing of what’s to come – something Snyder & Co. are banking on.